The U.S. women no longer have a mental edge. The defense won’t be able to keep up with Sweden’s forwards. The Americans fear Sweden yet, at the same time, are too cocky.

All because of a game at the Rio Olympics in 2016. That was decided on penalty kicks, no less.

“Players and coaches are not focused on what was, we’re focused on what will be,” U.S. coach Jill Ellis insisted Wednesday, a day before the teams meet again in the Group F finale. “That’s really where you have to be. You’ve got to look forward. It’s different players (from 2016), different teams, it’s a different time.

“The past is irrelevant. It’s the game in front of you.”

Yeah, good luck with that.

But when Sweden beat the U.S. women in the quarterfinals in Rio, it added a level of saltiness that hadn’t existed. The loss was the earliest exit the Americans had made at a major international tournament.

It also was Sweden’s fourth win in nine games against the U.S., a stretch of “dominance” few other teams have managed against the three-time World Cup champions.

So no, Sweden is not going to let that one go.

The U.S. beat Sweden the next time the teams played, a friendly in Sweden in 2017. But its win over the United States in 2016 remains a point of pride for the Swedes ahead of Thursday night, a rallying cry for a game that is otherwise meaningless.

Both teams have already advanced to the knockout rounds, with who wins the group –and likely gets France in the quarterfinals — the only thing left to be decided.

For the last several days, Swedish reporters have appeared at the U.S. media availabilities, relaying what could be taken as slights from Sweden's players and asking for a reaction. Veteran goalkeeper Hedvig Lindahl is on record as saying the Americans no longer have the psychological hold on Sweden they once did.

And at Wednesday’s pre-match news conferences, Ellis was asked which of Sweden's players would be good enough to make her starting roster. She declined to answer, saying, diplomatically, that she’s never seen any of their players in individual workouts and doesn’t know their mental makeup.

Lindahl, meanwhile, said she thinks the U.S. is gunning for Sweden and already looking past them.

“It’s the first time since the Olympics that we meet in this kind of setting, so I do think they want to put us in our place,” Lindahl said. “At the same time, we hear communication from the U.S. that they’re going to play seven games in this tournament, so it doesn’t feel as if they have all of their focus on this game.” 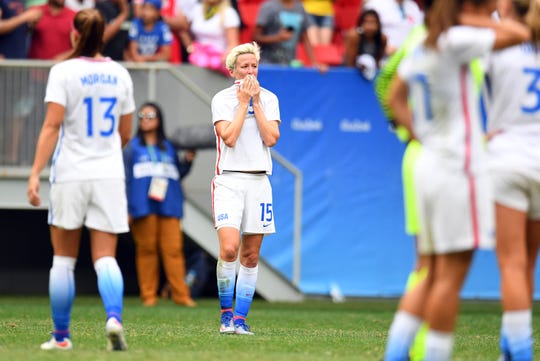 In reality, it probably depends on the Americans. Some, like Christen Press and Crystal Dunn, have said the 2016 loss, while disappointing, has no bearing in this next game. The U.S. is a different team than it was three years ago, when it was still in transition from the 2015 World Cup.

For others, however, this game has been circled on their calendar since the draw in December.

“I am SO looking forward to seeing Sweden,” veteran defender Becky Sauerbrunn said last month. “You just have that bad feeling and you know that that could happen again. It could very easily happen again at the World Cup. So what do you do to make sure that doesn’t happen?

“For us, it’s do you work that extra bit harder? Do you watch a little bit more film? People are doing what they think they need to do to never have to feel that again. Because it’s a terrible feeling.”

The Americans took similar motivation from their loss to Japan in the 2011 World Cup – also on penalties – and rode it to a third consecutive Olympic gold medal in 2012 and, then, their third World Cup title four years ago in Canada.

But it’s not so much obsessing about a particular team as it is holding on to the feeling left by the loss to said team.

“You don’t forget the taste in your mouth when you fail and when you lose in a world championship,” Press said.

Apparently Sweden doesn’t forget it, either.