Jockey Robbie Dunne called Britain’s most successful female rider Bryony Frost a ‘dangerous f****** whore’, before threatening to put her through a fence, because it ‘is the only way you are going to learn’, hearing told

National Hunt jockey Robbie Dunne abused, harassed and intimidated Britain’s most successful female rider and threatened to put her through a fence and hurt her during a race, a disciplinary panel has heard.

Dunne, 36, appeared in front of a British Horse Racing panel on Tuesday to face allegations of acting in a violent or improper manner towards Bryony Frost, 26, and acting in a way prejudicial to the sport.

The panel, led by Brian Barker QC, heard claims that mocking and bullying behaviour dated from 2017 and deteriorated into threats of violence and foul, abusive and misogynistic language.

The panel heard a campaign of bullying began when Dunne stood in front of Frost naked in the changing rooms, but she stood up to him.

The older rider, it is claimed, believed Frost had ridden dangerously and he took it upon himself to ‘educate’ her, even though she is ‘a more successful jockey than him’, according to sports lawyer, Louis Weston, acting for the BHA.

Weston recounted incidents at Stratford on July 8, Uttoxeter on August 17 and Southwell on September 3, all last year, which form the basis of the charges. But he also picked out other races, which he said demonstrated how Dunne would intimidate Frost, by riding hard against her.

As well as the abuse, it is alleged Dunne repeatedly threatened to cut across Frost’s horse, a move known in racing as ‘murder’, and to injure her by forcing her through a fence. 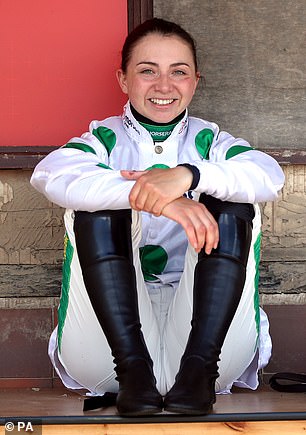 ‘Murder in this context does not have the normal meaning it does outside of racing, explained Weston. ‘Murder means I’ll cut you up or cut across someone.’

The feud came to head on September 3, at Southwell when, Weston told the panel, Dunne’s mount, Cillian’s Well, fell and died, and the male jockey believed Frost was to blame. 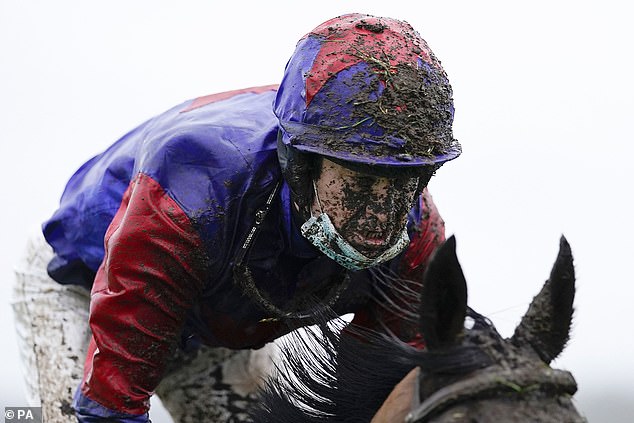 ‘The next time I ride against you, I promise I will put you through a wing [a fence],’ Dunne is alleged to have said to Frost.

‘It a particularly dangerous thing to happen to a jockey because not only do they come off their horse but they come into contact with a physical object that can do them really serious harm,’ added the BHA lawyer.

‘He is threatening to do her very serious injury. She replied, ‘what is your problem?’

‘He responded… ‘I promise you next time I ride against you I am going to hurt you.’

Weston said that National Hunt racing was dangerous enough without jockeys threatening to do one another harm. 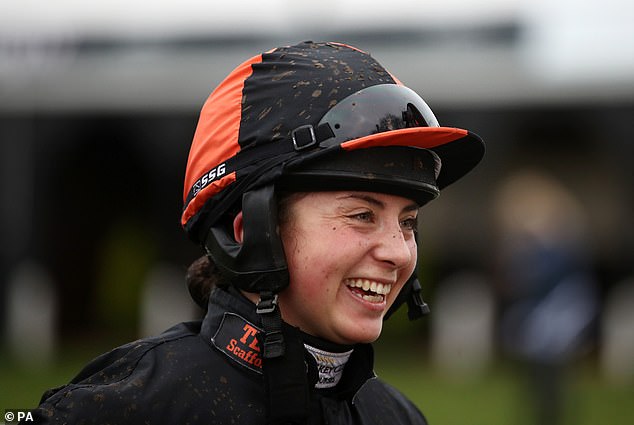 Frost, pictured racing at Hereford earlier this month, was reduced to tears, it is claimed

‘[It] is conduct that is simply unacceptable in a sport that has the level of dangers that it does, to have one jockey saying to another before a race ‘I am going to come after you to murder you in the race’,’ Weston told the panel.

An independent disciplinary panel of the British Horse Racing Authority is hearing evidence after Frost lodged a complaint against Dunne to the BHA in September 2020.

The case has brought weighing room culture – and alleged sexism – into sharp focus. 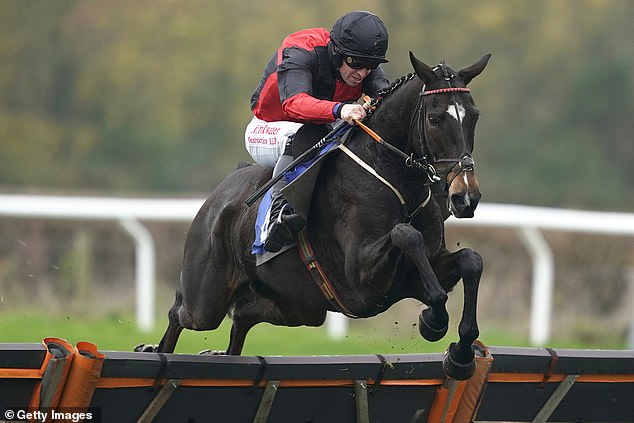 The BHA alleges Dunne, winning at Taunton this month (above), threatened to put Frost through a fence

It has rocked racing, not least because Frost is so successful having won the King George on Frodon in December and recently chalked up a fifth grade-one success.

In addition, the camaraderie of the weighing room, which self-police’s the conduct of riders, has long been considered a strength in a high-risk sport and horse-racing has prided itself as a discipline in which men and women can compete on equal terms.

Both those tenets are now being brutally tested in the full glare of publicity.

Dunne is expected to answer the allegations when the hearing continues tomorrow and he denies all but one of the six charges laid against him. 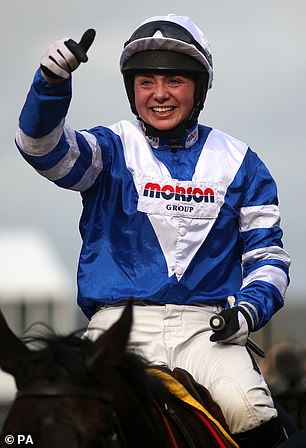 Frost is the most successful British female jump jockey

The jockey is accused of breaching two British Horseracing Authority rules in relation to each event at Uttoxeter, Stratford and Southwell.

Under rule J19 it is alleged he displayed ‘conduct prejudicial to’ the sport by ‘bullying and harassing’ a fellow jockey. He denies all three of these charges.

Under rule J20 it is claimed he was ‘acting in a violent or improper manner’ by abusing another rider. Dunne only accepts allegations in relation to Southwell.

Today, the lawyer for the BHA indicated that Dunne disputes some elements of Frost’s claims in relation to Southwell.

Weston said that in his statement about events at the Nottinghamshire course, Dunne claims he said, ‘I will put you through… not that you’ll get hurt, but if you get hurt it is the only way you are going to learn’.

The BHA representative said that Dunne believes it is the role of older jockeys to instruct younger ones and the same has happened to him in the past and it is OK as long as you ‘make an apology’.

Dunne is also expected to point out that stewards have not found fault with his riding.

But Weston concluded: ‘Each of those incidents of itself is a breach of J19.

Calling a woman jockey, any jockey, a ‘f****** whore’ or a ‘dangerous c***’ is prejudicial to the reputation of horse racing. It is language that has no place at all, misogynistic language of that sort. 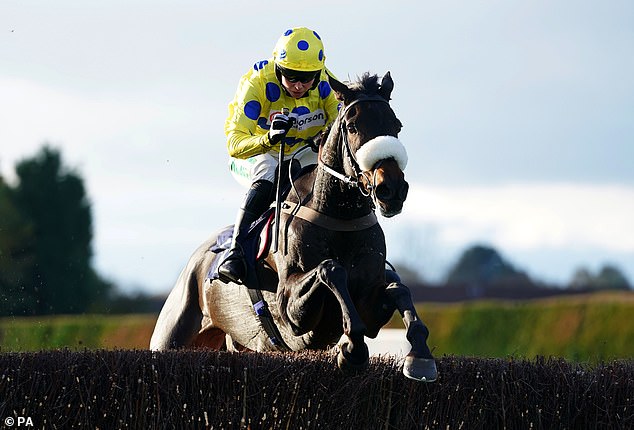 ‘Threatening to ‘murder’ someone. Premediated breaches of the rules of racing are plainly conduct that is prejudicial [to the reputation].

‘As threatening to put someone through a wing is plainly prejudicial.

‘Participants should be able to compete on equal terms whatever their gender,

‘Where a sport allows someone to call someone slut and whore on the course… it is wholly unacceptable.’

The hearing is finally taking place at the BHA headquarters in London 15 months after Frost’s original complaint.

There has already been a long investigation by the BHA’s former head of integrity, Chris Watts, resulting in a 120-page report, which highlighted concerns over weighing room culture.

The build up to the hearing has been racked by controversy after that report was leaked to a national newspaper and Watts left the BHA. The Professional Jockey’s Association claimed that a fair hearing had become impossible. 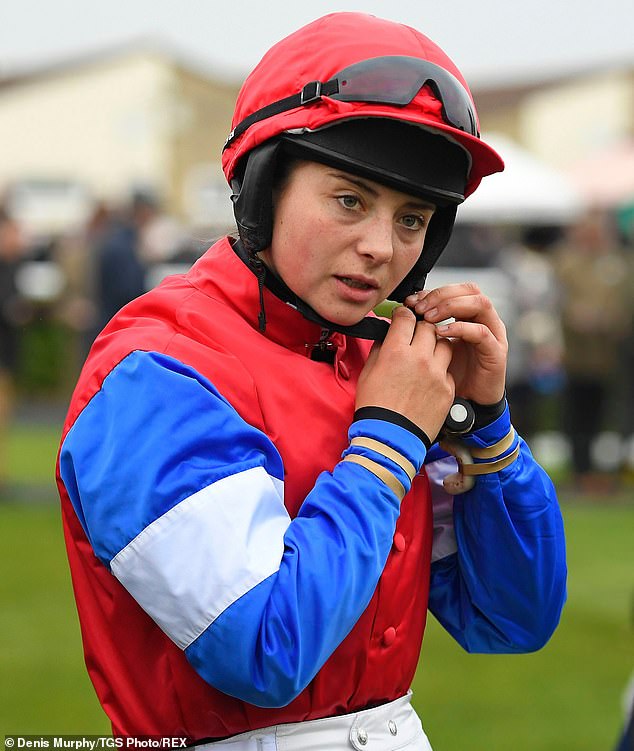 However, the BHA has pressed on and the hearing is scheduled to last six days.

If Dunne is found to have breached the rules, he could face a fine and a ban from competing.

The range of punishment for breaking Rule 19, acting in a way that is prejudicial to horse racing, is a fine of between £1,000 and £15,000 and a ban from one month to three years.

How the saga has unfolded

September 2020: Bryony Frost complains to the BHA about her alleged treatment by Robbie Dunne.

December 26: Frost talks about negativity in the weighing room after her King George VI Chase win on Frodon.

January 12, 2021: Details emerge of an angry exchange involving Frost and Dunne after his mount Cillian’s Well fell fatally at Southwell on September 3.

January 24: Racemail reveals Frost’s concern about her treatment goes back to June 2019, when she was involved in a verbal incident with trainer Johnny Farrelly at Uttoxeter.

April: BHA head of integrity Chris Watts completes his 120-page report into Frost’s allegations, with Dunne told he will be charged.

October 17: Watts’ leaked report appears in a Sunday newspaper. It details Frost’s statement with allegations of problems with Dunne back to 2017 and threats he had allegedly made against her. Dunne’s legal team accuse the BHA of losing control of the investigation.

November 24: Dunne is charged with bullying and harassing a fellow jockey on three race days in 2020.