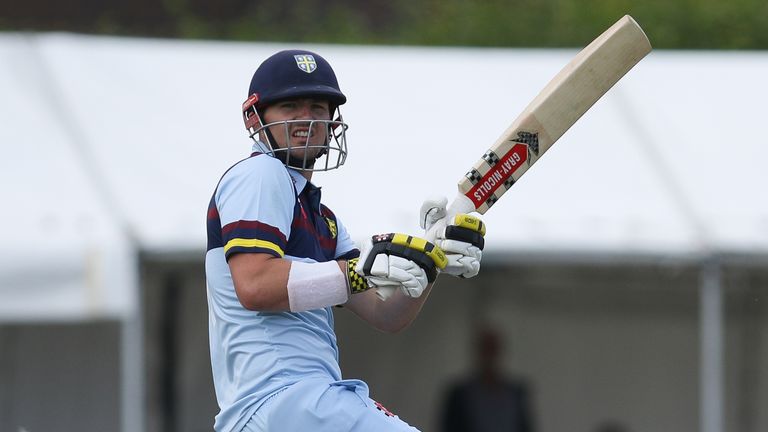 Alex Lees produced a career-best knock of 126 to guide Durham to a nail-biting two-wicket win via the Duckworth Lewis Stern method over Essex Eagles in their Royal London Cup clash at the Emirates Riverside.

Lees anchored the Durham chase single-handed as no other player in the batting order passed 25, notching his second ton of the campaign. Durham vs Essex scorecard

The Yorkshireman held his poise on a slow wicket to make his highest List A score, striking the winning runs off the first ball of the final over to lift the north-east outfit top of Group A with two matches remaining.

Feroze Khushi scored a century on his List A debut for the visitors in their total of 227-6 in an innings which was interrupted by the rain.

Although the Eagles mustered a competitive score from their 45 overs due to the elements, Khushi’s efforts were in vain as the hosts held their composure to claim the win.

Meanwhile, a dominant Northamptonshire batting display, underpinned by an excellent, enterprising century partnership from Ben Curran and Ricardo Vasconcelos, provided the foundation for a comprehensive 81-run win over Somerset. Northants vs Somerset scorecard

The pair put on 129 in exactly 20 overs before both falling short of well-deserved centuries after facing 93 balls. Curran made 94, his highest List A score, while Vasconcelos contributed 88 to set the hosts on course for a big total.

With the middle order upping the momentum with some aggressive hitting, Northamptonshire posted a formidable 305-6 in a match reduced to 46 overs a side due to rain.

Somerset’s top order got bogged down against some disciplined bowling in reply and fell rapidly behind the run rate as they lost four wickets in seven overs as they were left with too much to do.

Hampshire’s hopes of qualifying for the knockout stage are still alive after they coasted to a six-wicket win over Kent Spitfires at Beckenham. Kent vs Hants scorecard

Ian Holland ripped out Kent’s top order with 4-12 as the hosts failed to bat out their overs, despite a rain-reduction to 24 per side. Scott Currie took 2-4 as the Spitfires were all out for 105.

The Duckworth Lewis method pushed the target up to just 107 and Hampshire chased it down with relative ease, finishing on 107-4 with Tom Alsop making 37 and Holland hitting an unbeaten 30.

Kent have now been eliminated, regardless of the outcome of Thursday’s final scheduled match with Gloucestershire at Beckenham, a fixture in doubt due to the Covid outbreak that saw Sunday’s match between Gloucestershire and Middlesex cancelled.

Glamorgan cruised to their fourth win in seven matches in Group 1 of the Royal London Cup as they beat Nottinghamshire Outlaws by eight wickets after easily chasing down a modest score of 73 in a weather-affected contest. Glamorgan vs Notts scorecard

It means they still lead their group and remain very much on course for a home semi-final in the knockout stage. They host Yorkshire on Thursday, while the Outlaws, now four points behind the leaders, welcome Northamptonshire.

Carlson smashes the ball away to the boundary to seal the victory! 💪

Will Fraine scored the fastest List A 50 in Yorkshire’s history to take his side to an emphatic eight-wicket victory over Derbyshire in a Royal London Cup match reduced to 10 overs a side at Chesterfield. Derbyshire vs Yorkshire scorecard

Fraine smashed 50 off only 19 balls and his unbeaten 69, which contained five fours and four sixes, from 32 deliveries took Yorkshire to their target of 109 with eight balls to spare.

Derbyshire had set a challenging total of 108-6 after rain delayed the start by six hours with Fynn Hudson-Prentice hammering four sixes in an unbeaten 38 from 17 balls.

Josh Sullivan took 4-11, including three in four balls, with his leg-spin before Fraine’s assault carried Yorkshire home at a canter and keeps alive their chances of making the knockout stage.

Meanwhile Lancashire vs Worcestershire was abandoned due to rain causing a washout at Old Trafford.