Sonny Bill Williams’ promoter claims the boxer’s Muslim “appearance” was questioned by Fox Sports when they were negotiating a fight contract with the pay-TV network.

Williams’ long-time manager, Khoder Nasser, said he had a conversation with a senior Fox Sports employee about a deal for the Williams v Barry Hall fight that he will “never forget”. 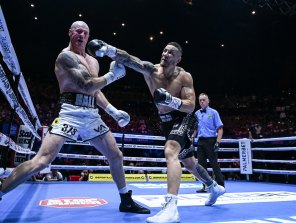 Cop that: SBW’s promoter, Khoder Nasser, has taken a swing of his own at Fox SportsCredit:Flavio Brancaleone

“We were talking at the cafe in Centennial Park and he starts talking about Sonny’s beard and asks me word for word, ‘What can we do with that beard’,” Nasser said. “I did everything I could not to go off my rocker. He is questioning why Sonny looks like a Muslim. There is no bigger insult as far as I am concerned. I told Sonny about it at the time and he was in a state of disbelief that he can have that even brought up.

“I was so angry about it that I wanted to raise it with Lachlan Murdoch [co-chairman of News Corp – which owns a majority stake in Foxtel] and I attempted, without any luck, to get in touch with him. Ithink Lachlan needs to be aware of this kind of behaviour. I am happy to relay the story to him face to face.

“I had a long and very profitable relationship with Fox Sports and Main Event through Anthony Mundine when Brian Walsh was doing the dealings for Fox. We had some robust and heated discussions, but the superstar talent was never asked about their appearance. Never.

“He knew the value of entertainment and the entertainers, no matter how they look. And I don’t ask why someone I am negotiating with has a shave or not, or whether they go home and drink 40 beers or they go home and pray. We did more than 40 fights with Walshy and that was never an issue for us.”

Nasser’s claims come a week after Fox sacked AFL reporter Tom Morris for sexist comments about a colleague. And this column last Sunday revealed Fox scrapped part of a Bryan Fletcher and Nathan Hindmarsh interview with Cameron Munster over a crude gag about Queensland premier Annastacia Palaszczuk that angered the Storm star and his manager, Fox host Braith Anasta. Fox Sports did not respond to requests for comment.

The SBW-Hall fight was the first foray into pay-per-view for Stan Sport, which is owned by Nine Entertainment Co, which also owns this masthead.

The alleged victim in the George Burgess matter was apparently no stranger to the Burgess family. Leaked text messages suggest that she reached out to three of the Burgess brothers, George, Tom and Luke, in the lead-up to the alleged incident that has jeopardised the remaining years of George’s career.

St George Illawarra forward George Burgess was charged on Monday with sexually touching a woman without consent and will face court next month. The incident is alleged to have occurred in Sydney earlier this month.

According to the text messages, the woman was trying to obtain charity items for a fundraising event and sent messages to the brothers. She appears to have known them for a number of years and has previously extended an invitation to at least one of the brothers – not George – to come to her home to have a “cup of tea”. I have seen text messages of this nature, which state: “I’ll be … living on my own. You can pop over for a cuppa.”

On March 4, she sent messages to the twins, George (pictured) and Tom, asking for help with a fundraiser. “Hi guys. It’s a huge favour to ask you guys please. My sister is organising [a fundraiser],” the message reads. “We want to get some footy jerseys signed. We will purchase them unless you’re willing to donate one and auction them off. If I got your respective team jersey to you, could you please get it signed for us?”

She then sent the message to Luke Burgess because she had not received a reply.

“Hey Luke, can you do me a favour please?” she wrote. “I just messaged George and Tom, but no idea if I still have their current phone numbers. My sister is organising [a fundraiser] and we want to get a couple of jerseys signed to auction off. So I’ve asked the boys if they could help. Would you please let them know I’m trying to get in touch with them. Either if they can message me here or on my number. I appreciate your help.”

The incident is alleged to have happened when George was delivering the jumper to her place on March 8. He was charged on March 21.

The NRL has the police report and the integrity unit wants to speak to George as the governing body assesses whether it needs to intervene and possibly stand George down. The NRL will not consider the moral issues, and will only focus on the criminal charge when making its decision.

More on the SBW-Hall aftermath. After the fight Hall came into SBW’s change room. Williams left his mates and the back-slappers behind and went for a private chat with Hall in a side room, showing great humility and compassion towards the man he had just beaten in comprehensive fashion.

Many good boxing judges were privately tipping Hall to knock Williams out. They may have been basing it on Hall’s draw with Paul Gallen in 2019 and Hall’s background as a fighter. What they did not count on was the work ethic and determination of Williams. His preparation was thorough and he never shirked the hard work. From the moment Williams set up his own gym in southern Sydney it should have been a clear sign to Hall and, potentially, Gallen that he was serious about the bout and a short-term career in boxing.

The next $6 million man

We’ve told you about Payne Haas′ decision to take his former agent Chris Orr to court. While that action is still before the courts, Haas has a new management deal, teaming up with Sportsplayer Management, which will do his next deal. It is unclear if Haas will need to conclude his case with his old manager before signing a rich new deal. The Broncos will need to pay him at least $1 million a year to secure his services and they have previously indicated they want him for up to six years. The $6m man has a ring to it.

While Cameron Ciraldo is the NRL-coach-in-waiting most clubs are keeping an eye on, the club Ciraldo is watching with interest is said to be the Melbourne Storm. 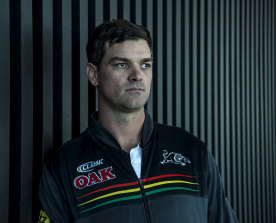 Craig Bellamy is a year-to-year proposition and, while the Storm are favoured to replace Bellamy from within the club, it would be hard to ignore Ciraldo, given the huge raps on him as a coach and a person. The Panthers assistant has been linked to the Tigers, Bulldogs and any other club with a coach under pressure, but the Storm are a viable option and would be ideal for a young coach to learn his trade, given Bellamy is likely to be there in an advisory role.

The Sims family has a strong sporting pedigree, and now Tariq Sims’ wife, Ashleigh, is set to add to that. After seven years of training, she will make her pro debut as a boxer as a super-featherweight on April 6 on the undercard to Harry Garside’s fight with Manuer Matet at the Hordern Pavilion. “I’m very excited to finally put all the work into action and start my journey in the pros,” she said.

Tariq has played more than 200 games for the Cowboys, Knights and Dragons, and six matches for NSW, while his brothers, Korbin and Ashton, also played in the NRL. Sister Ruan was a trailblazer in women’s rugby league, captaining the Jillaroos and NSW Blues.

Former All Black and Newcastle Knight John Schuster has reached out to Andrew and Matthew Johns to ask them to be involved with the Samoan league team, and now it could happen.

“I think involving the Johns boys is a no-brainer,” said Schuster, who played 47 games for the Knights in the early 1990s and played with the Johns brothers during that time.

“They give the team instant credibility but, more than that, they understand exactly what it takes to make a team successful. They are smart minds and they have expressed an interest in doing it and I think it would be foolish to ignore their interest and desire to help. When people of that calibre want to assist you have to involve them.”

Schuster is enjoying retirement in Samoa and rarely misses a chance to catch up with the NRL.
“We get the games on TV over here,” he said. “I love watching the NRL. It’s a real passion of mine.”

He has an obvious family interest. “I keep a close eye on my nephew, Josh,” he said. “Injuries have got him at the moment, but he is a real talent.”

Josh Schuster has played a starring role on the Sea Eagles’ left edge in recent years.

The off-season match-up that is sure to catch the eye is the pairing of South Sydney’s Liam Knight and Jai Arrow as flatmates. To say the least, they are excitable characters.