‘Still we rise, I really can’t believe it’: Delight for Lewis Hamilton as British F1 ace wins his SIXTH Drivers’ Championship with second-place finish at US Grand Prix

Despite a poor qualifying session at the Circuit of the Americas that saw the British driver start from fifth on the grid in Austin, Texas, Hamilton worked his way to second to clinch the title.

He is now only one championship title away from joining Ferrari great Michael Schumacher, who had seven world crowns, at the top of Formula One’s list of champions.

Just a finish of eighth place was needed to secure the four points to land him out of reach of his last remaining title rival – Mercedes teammate Valtteri Bottas.

Bottas needed to win and rely on a catastrophic race for Hamilton to have any chance of taking the title fight to the next race in Brazil.

If the Finn had taken the chequered flag, Hamilton would still have won the title as long as he finished eighth or higher, something he has done in the previous 17 out of the last 18 races.

With only 78 points still available over the next three races, Hamilton is within touching distance of another title as he led Bottas by 74 points after winning in Mexico last week. 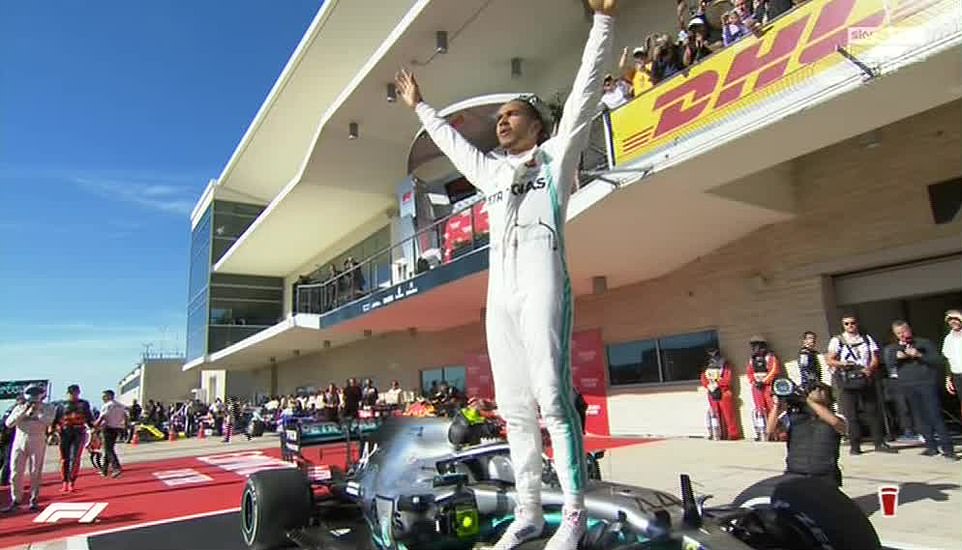 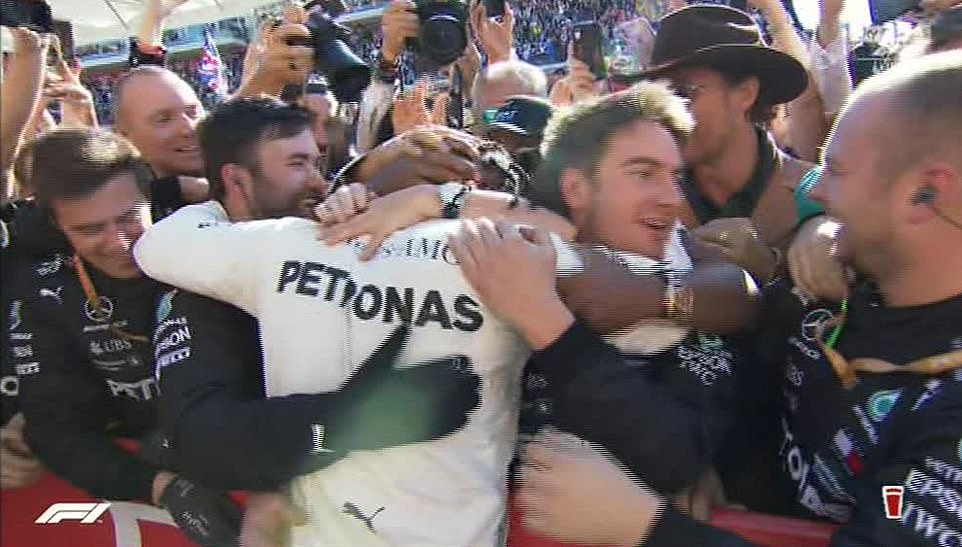 The British driver was mobbed by his team as he cross the finish line to seal a near-record equalling world championship in Austin, Texas, today 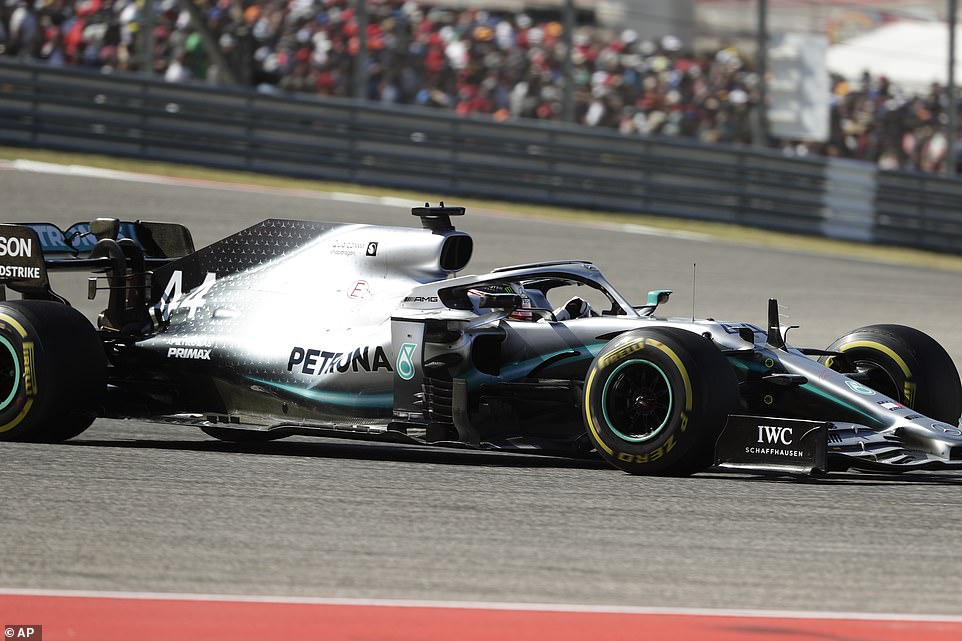 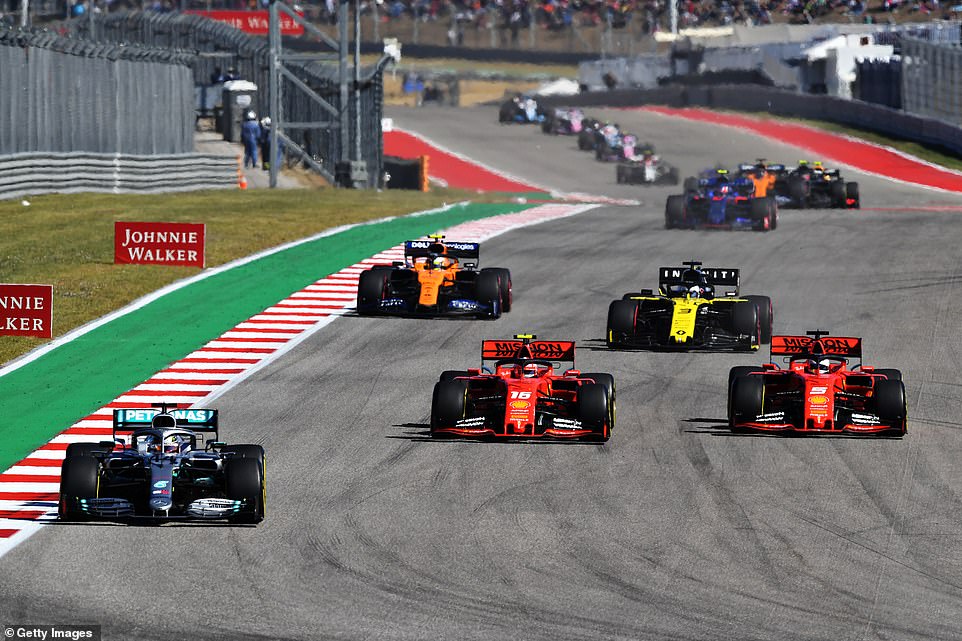 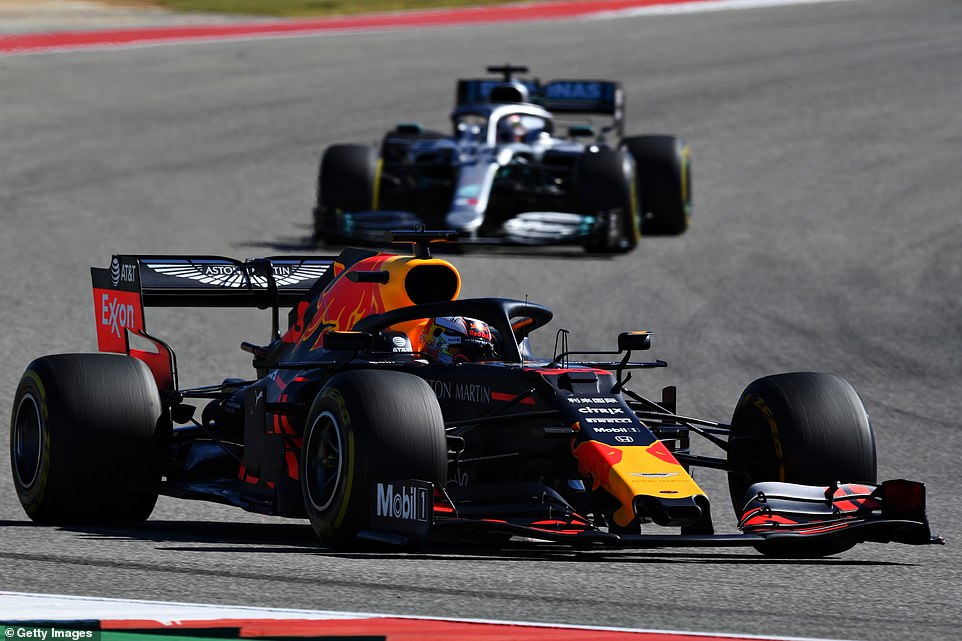 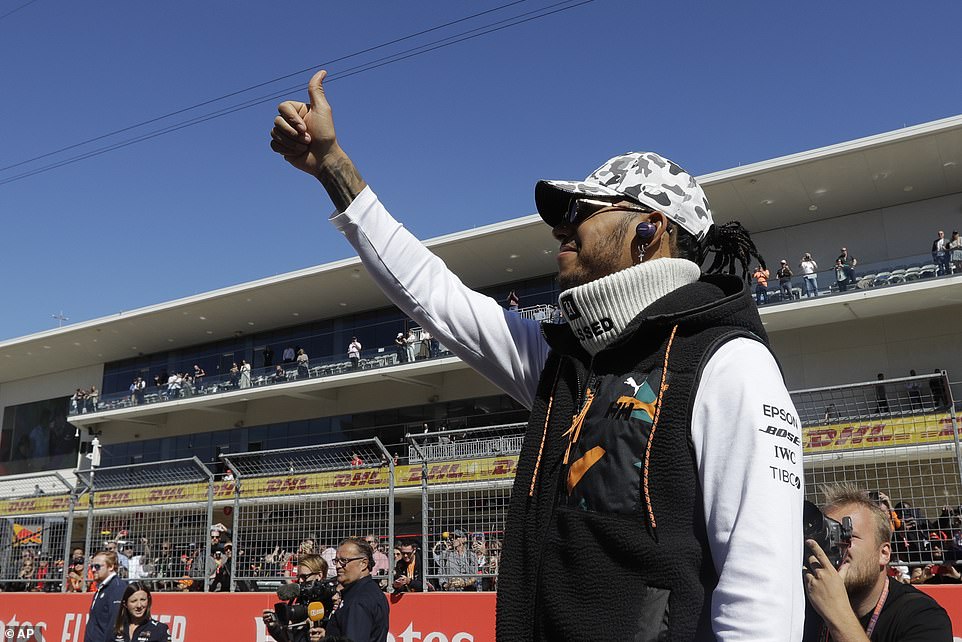 Mercedes driver Lewis Hamilton giving a thumbs up to fans before the Formula One US Grand Prix race at the Circuit of the Americas in Austin, Texas, today 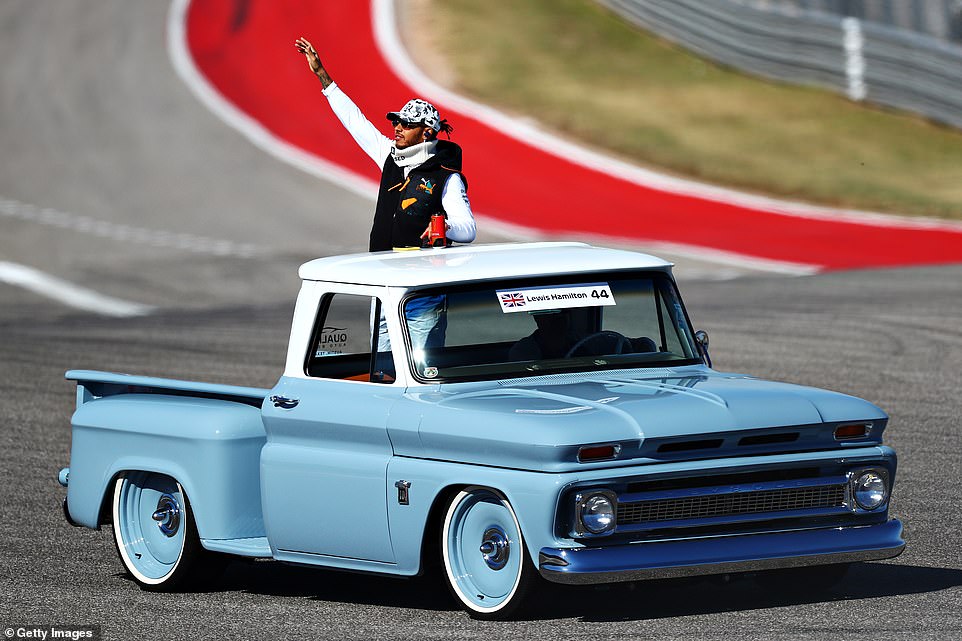 Lewis Hamilton waving to the crowd from a classic car during the drivers’ parade before the F1 race in Austin, Texas, today 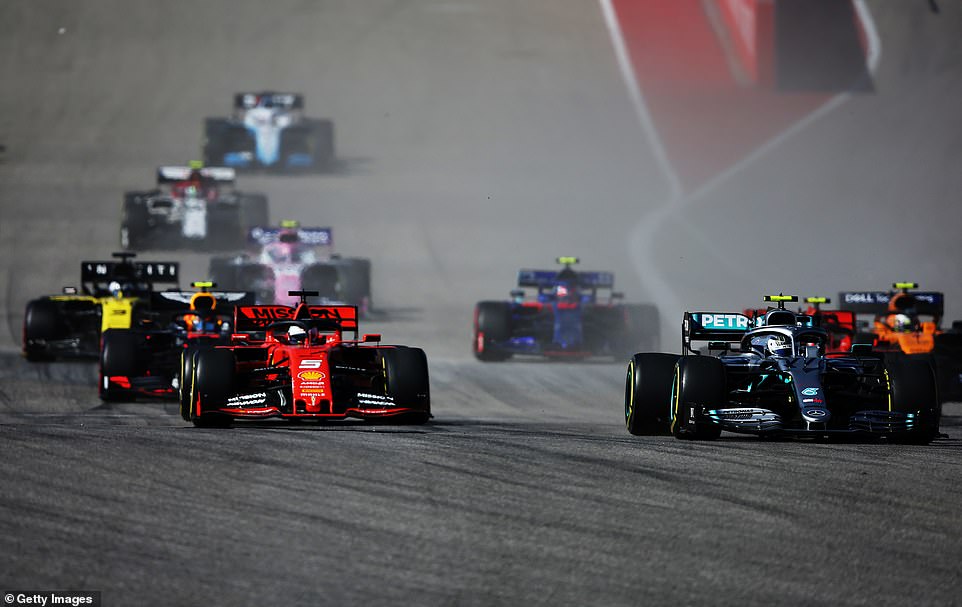 But Hamilton held on to secure a sixth world title that puts him just one behind legendary driver Schumacher’s all-time record of seven.

As the season draws to a close and Hamilton’s £40million-a-year contract comes to an end, there has been speculation about his future at Mercedes-AMG Petronas.

There were rumours Hamilton may return to McLaren where he won his first title 11 years ago, but that was ruled out by chief executive Zak Brown who said he intended to stick with Lando Norris and Carlos Sainz.

Hamilton, who urged his fans to go vegan this week, himself has strongly hinted he intends to stay with the Silver Arrows team.

He also gave suggested he will be still be in F1 in 2021, when the new regulations announced by the sport on Thursday will come into force, saying ‘I am definitely enjoying what I am doing and I don’t see any reason to stop because I love what I do’. 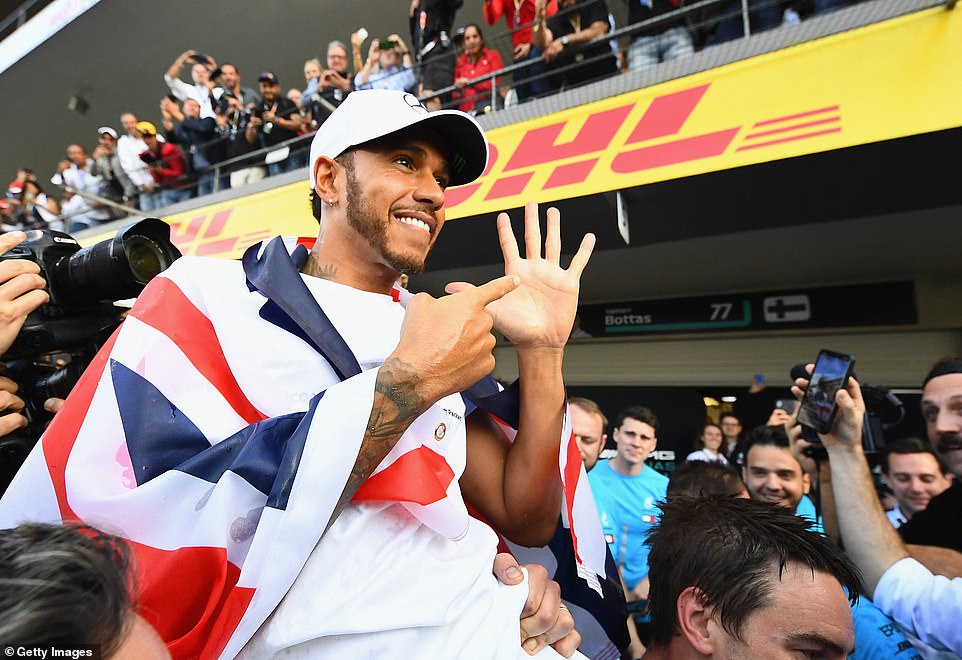 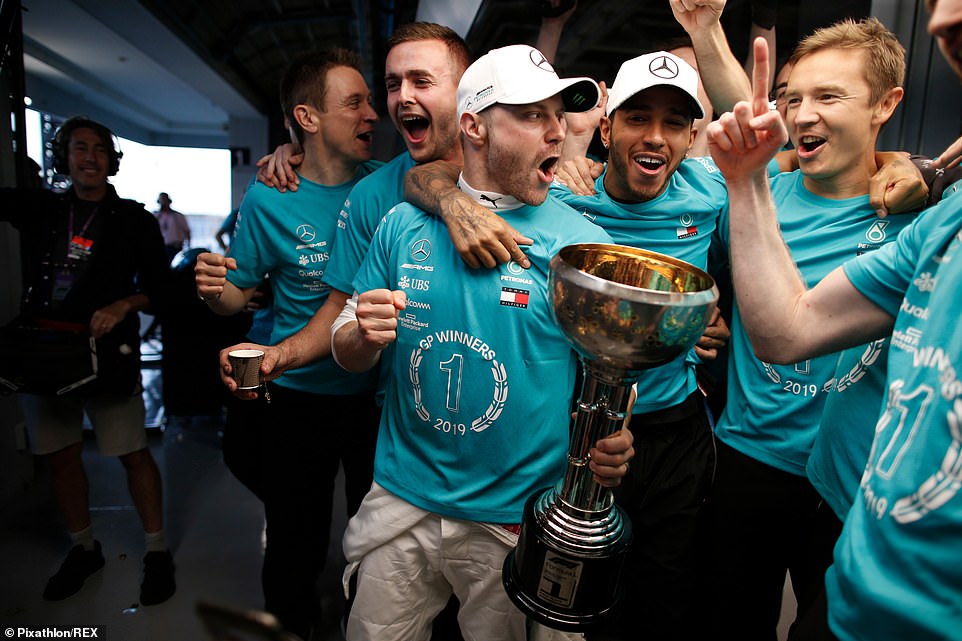 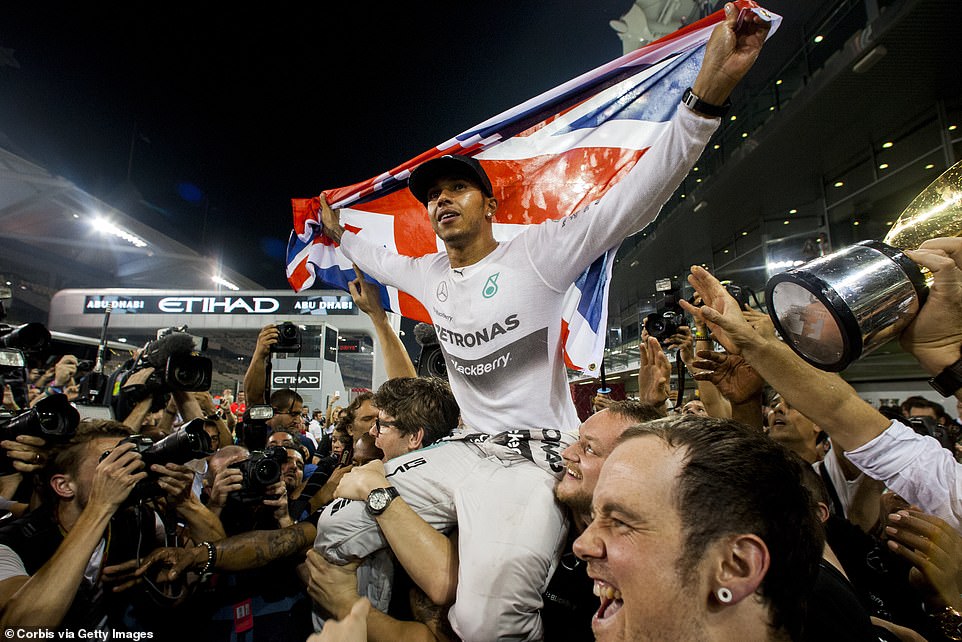 Hamilton though edged Nico Rosberg throughout 2014 to go on and win his second title. He is seen here celebrating winning the World Championship at the Grand Prix of Abu Dhabi 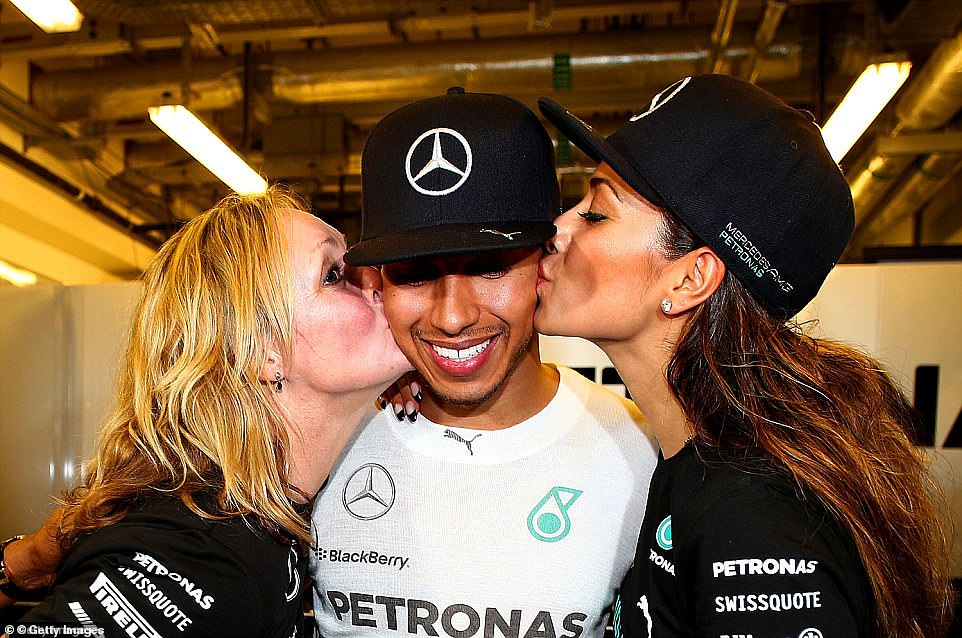 At the start of the US Grand Prix Bottas started on pole position ahead of Sebastian Vettel and Max Verstappen, with Hamilton in fifth on a track he has won a record five times.

Hamilton made his way through the filed into first position, but at lap 42 his team told him they were ‘concerned these tyres will not get to the end’.

The British driver is the sport’s fastest man ever over one lap but has had only four poles to his name this year.

The flare up came during the second qualifying session when Hamilton and Verstappen became entangled at Turn 19.

Hamilton was trying to find a way past the Toro Rosso of Daniil Kvyat and in doing so pushed Verstappen to the edge of the track. The Dutchman ran on to the grass to escape a collision.

Verstappen screamed over the radio: ‘So, it’s his f***ing fault this, what’s happening.’

The pair had a spat over the course of the week over the first lap in Mexico last Sunday in which Hamilton said he feared he would be ‘torpedoed’ by Verstappen and called his rival’s racing ‘silly’. 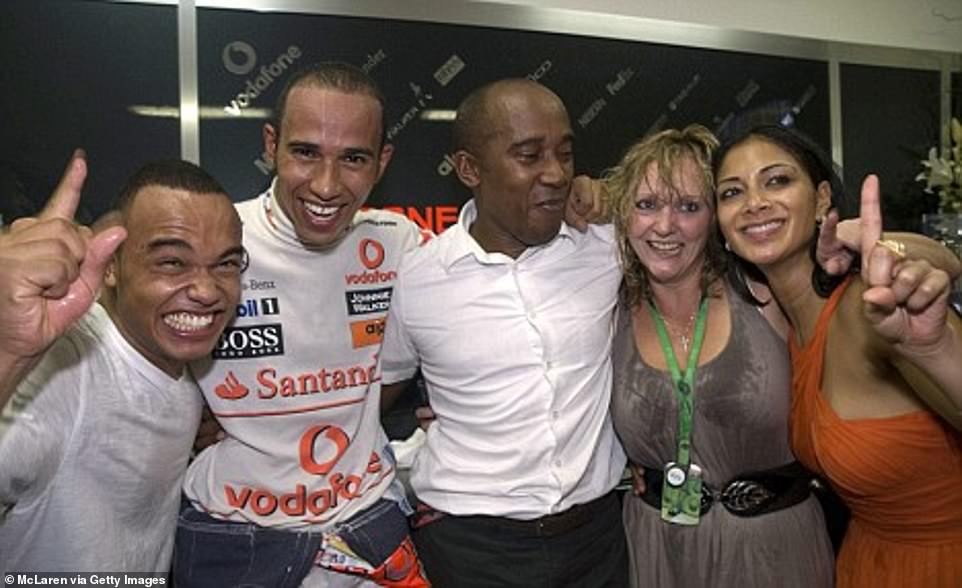 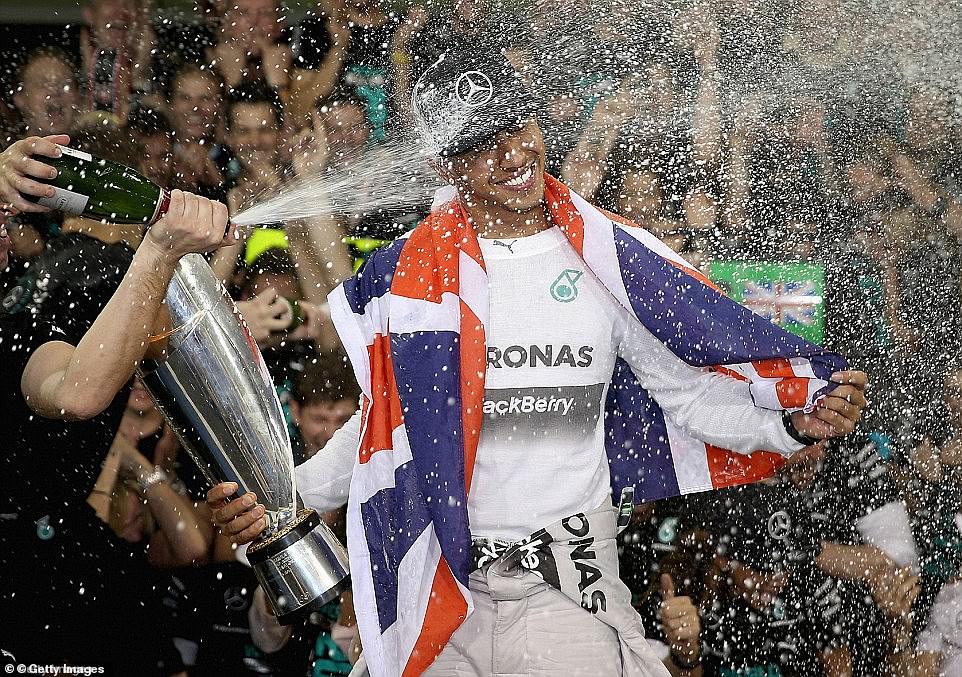 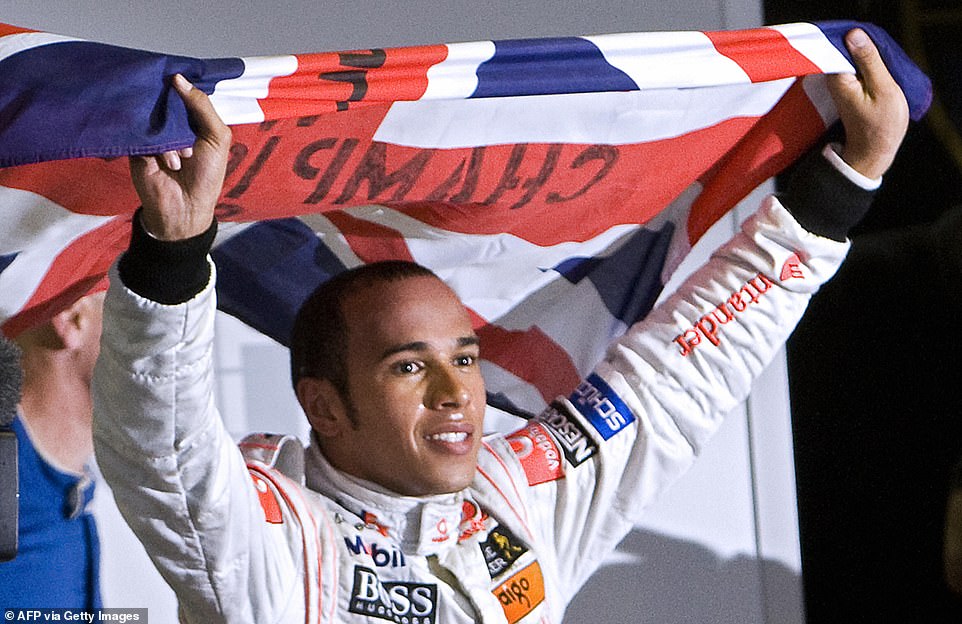 Hamilton waving his the Union flag to celebrate after winning his first F1 World Championship in November 2008 at Interlagos race track in Sao Paulo, Brazil. Hamilton was crowned Formula One champion after finishing fifth in the Brazil Grand Prix. It wasn’t until the final few seconds of the season he was able to secure his first world title 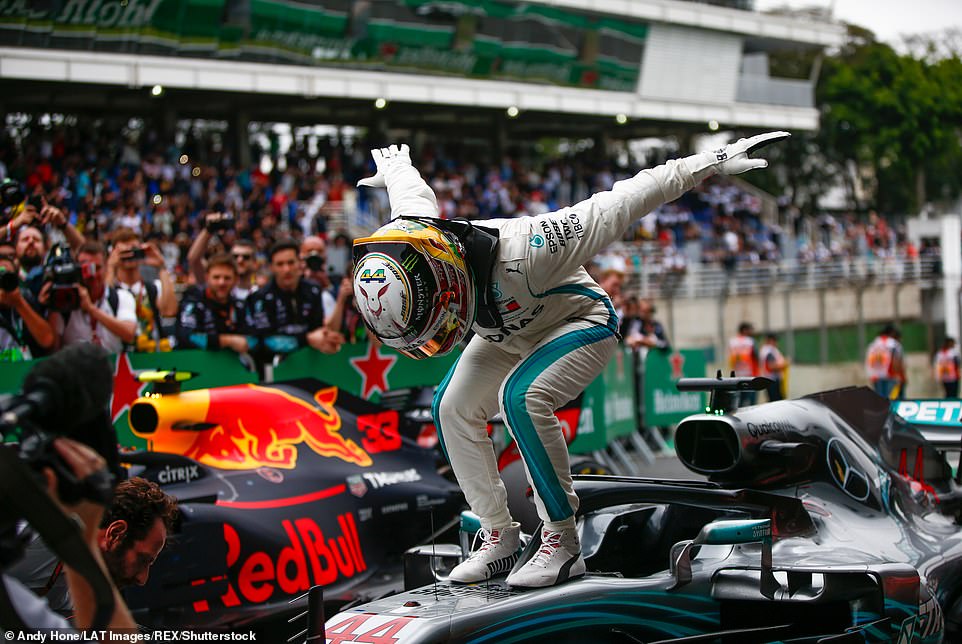 Hamilton celebrating winning the during the Brazilian GP in 2018. He had already clinched the world title at the Mexican Grand Prix two weeks earlier 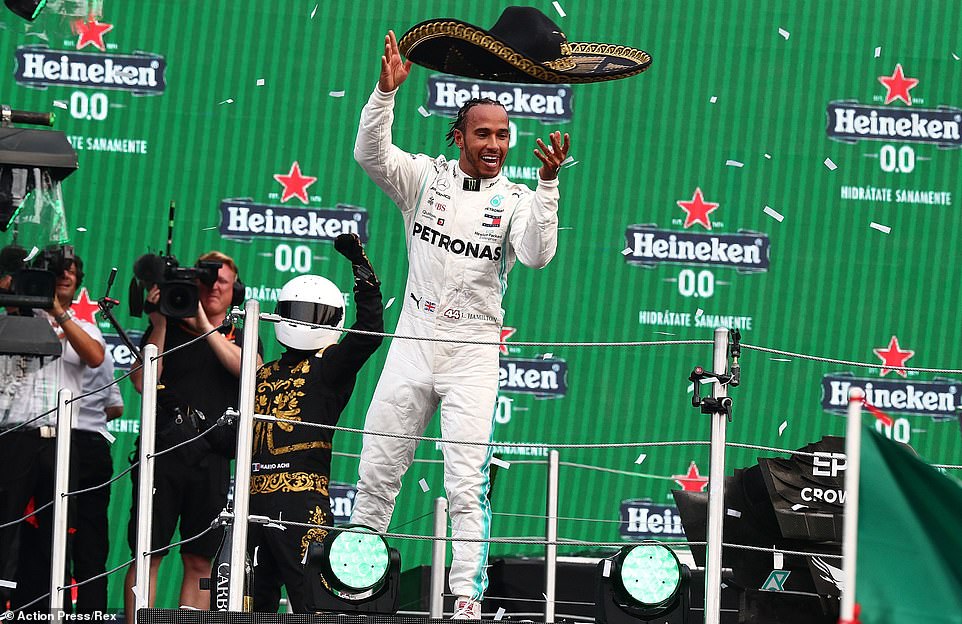 Hamilton, Sebastian Vettel and Valtteri Bottas at the end of the Mexican Grand Prix last Sunday. Hamilton celebrated edging closer to his sixth title with a win in Mexico City 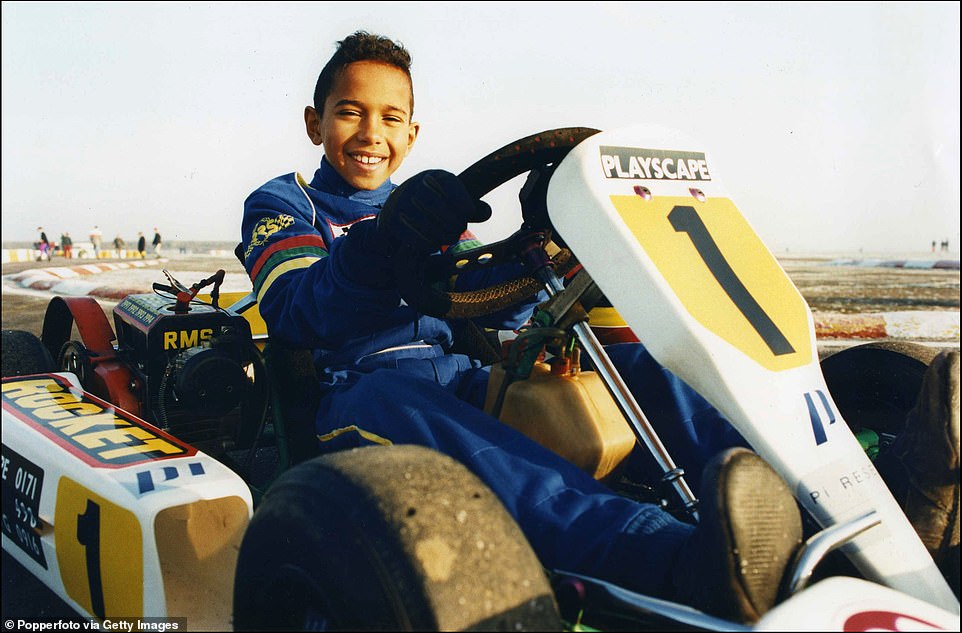 Before becoming a world champion, Hamilton was a British Junior Go Kart racer. He is seen aged 10, ready for a drive at Kimbolton race track in Huntingdonshire, Cambridgeshire, in December 1995 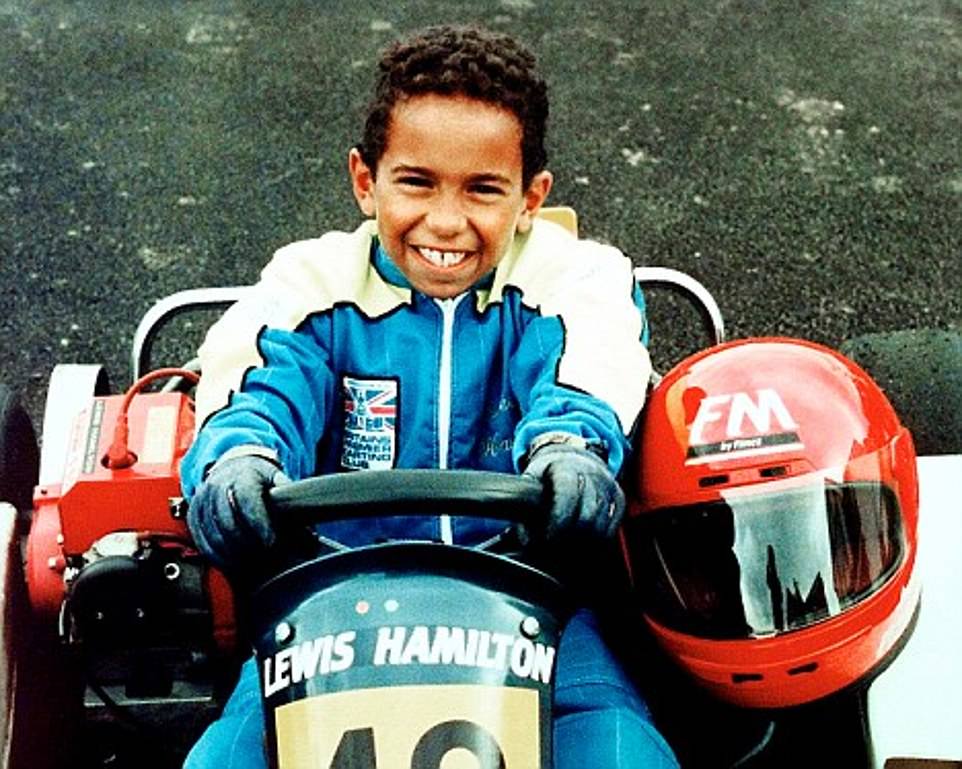 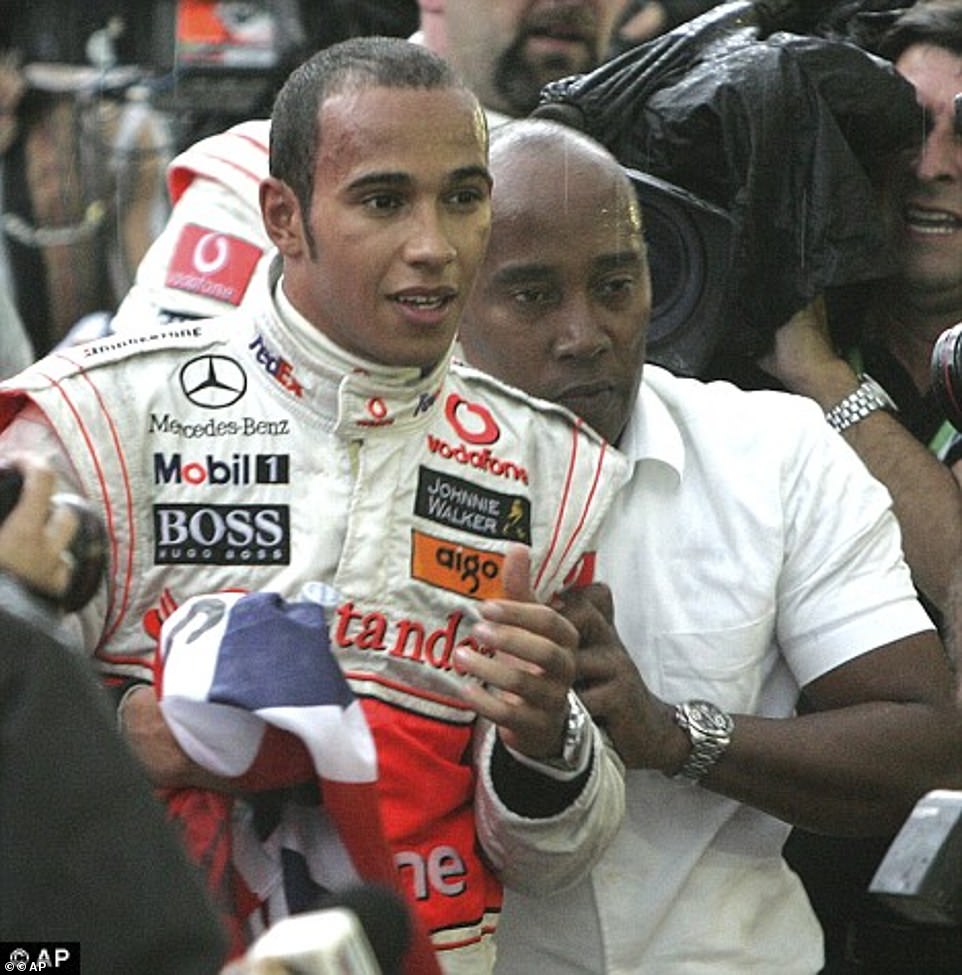 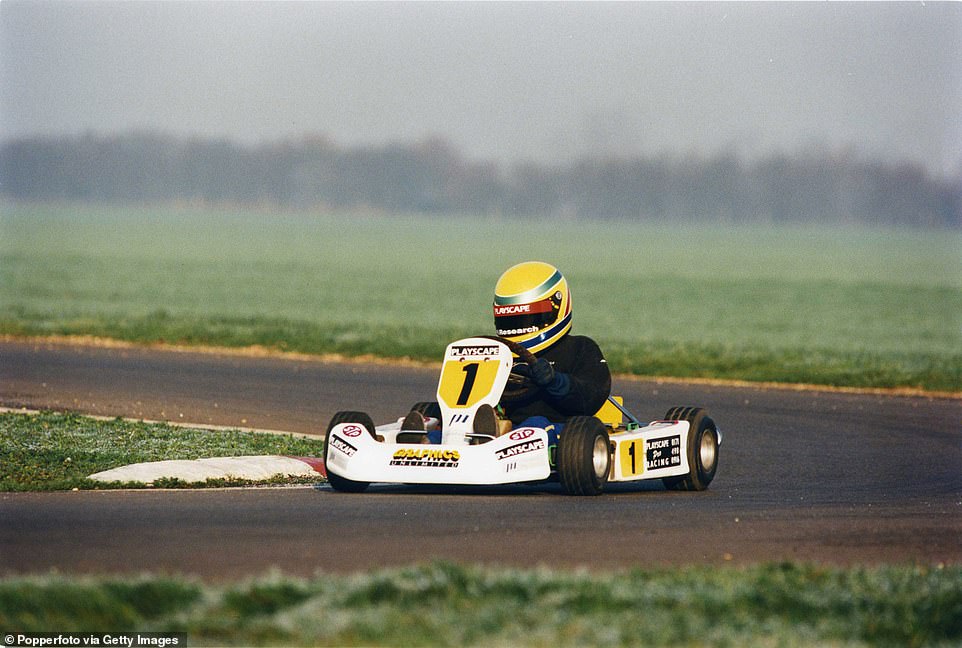 Bright future: Hamilton has come a long way since his karting days He is pictured (above) racing at Kimbolton in 1995 at the age of 10