Home » Sport » Tom Thibodeau’s effect on Knicks has been drastic

Tom Thibodeau’s effect on Knicks has been drastic 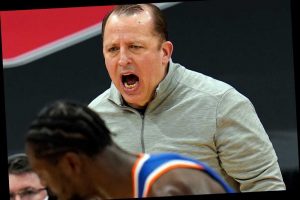 The Knicks are must-watch

The Knicks are finally worth your time

From the minute the Knicks hired Tom Thibodeau as their new head coach in July, their defense figured to be in for an upgrade.

But there was no guarantee a tangible change — and the wins that followed — would come this quickly.

The Knicks left New York on Dec. 27 fresh off their first win of the season, a surprising defeat of the Bucks. They returned on Tuesday as winners of four of their last five entering Wednesday night’s showdown against the Jazz at the Garden, with plenty of strong efforts fueling their surge but the defense chief among them.

“I think the togetherness is a big part of it. I think the willingness to share the ball, to play hard for each other,” Thibodeau said after Monday’s 113-108 win over the Hawks. “[But] it starts with our defense and the rebounding. We still have to get our turnovers down but I think just the overall way they’re playing for each other. I think that’s a big part of winning. They come in and they work every day.”

“The big thing is if you defend and you rebound and you take care of the ball, you’re going to be in position to win,” Thibodeau said.

Of course, it’s not the defense alone that led the Knicks to winning three of four on their road trip. There have been key performances from newcomers and holdovers alike as the Knicks got off to their best start through seven games since the 2012-13 season:

“Quivers”: The backcourt combo of Immanuel Quickley and Austin Rivers is still very new but it has been impressive enough to already garner a nickname via social media. They were both on the floor for crunch time Monday against the Hawks — Rivers for the final 17:06 and Quickley for 15:09 of the final 15:51 — to help turn a 15-point deficit into a five-point win.

Rivers played strong defense on Trae Young and drained a key 3-pointer late off a sharp pass from Quickley, who chipped in 16 points.

“We kind of play off each other offensively, defensively he’s really good as well,” Quickley said. “So it just makes it really easy on both ends of the floor playing with him.”

King Julius: Julius Randle had another monster game Monday, racking up 28 points, 17 rebounds and nine assists. His struggles last season were well-documented but he has been much improved early on this year while putting in heavy minutes.

“I think guys are believing in Coach and believing in his message and playing for each other, playing hard, playing together,” Randle said.

Resiliency: The Knicks have spent plenty of time with the lead during their four wins, but dug themselves out of a 15-point deficit in the third quarter Monday to end the road trip on a high note.

“It starts with Thibs and then it goes all the way down,” RJ Barrett said. “Everybody that comes in the game plays hard, plays with an edge.”

Shooting hiccup: The anomaly during the five-game stretch? The Knicks shooting 3-for-36 from deep against the Raptors. Across the other four games, they combined to shoot 49-for-100. That includes only one game from Alec Burks, who was expected to be one of their top shooters.