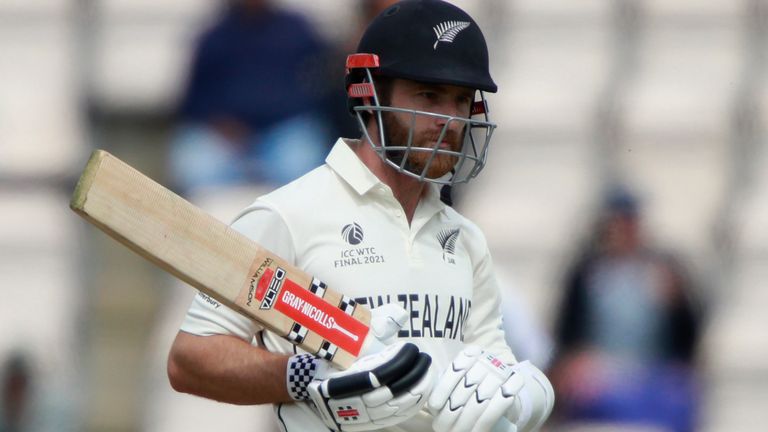 New Zealand have become Test cricket’s inaugural world champions after Kane Williamson and Ross Taylor steered them to an eight-wicket victory over India on a gripping sixth and final day at The Hampshire Bowl.

The Kiwis were set 139 to win from 53 overs after rolling India for 170 and reached their target in 45.5 overs despite a few scares as a weather-affected game – days one and four were entirely washed out – ended in the Southampton sunshine on the reserve day.

Ravichandran Ashwin reduced the Black Caps to 44-2 in the chase after dismissing openers Tom Latham (9) and Devon Conway (19) before skipper Williamson (52no) and Taylor (47no) shared an unbroken match-winning partnership of 96, with Williamson overturning an lbw dismissal off Ashwin on one and Taylor dropped by Cheteshwar Pujara at slip on 26.

Williamson – who was also dropped late on by Jasprit Bumrah while on 45 – reached fifty from 86 balls before Taylor smoked the winning four as New Zealand scooped the World Test Championship title and the £1.2m winner’s cheque, getting on for two years since their heart-breaking defeat to England in the 50-over World Cup final at Lord’s. 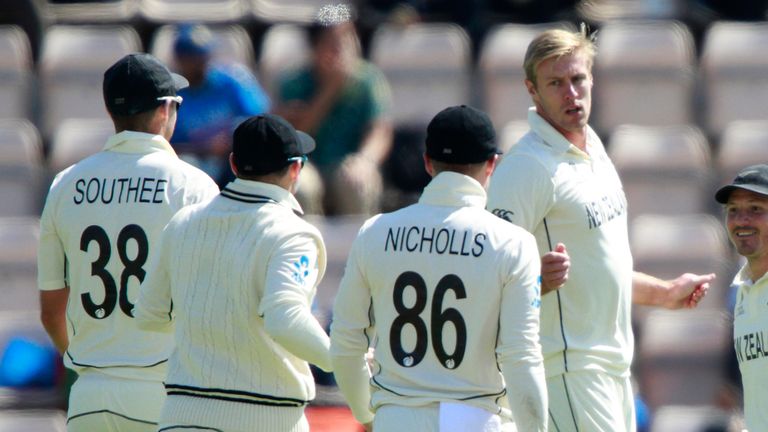 Tim Southee (4-49), Trent Boult (3-39) and Kyle Jamieson (2-30) had earlier ripped through India, although at one stage it seemed New Zealand may be left ruing Southee dropping Rishabh Pant (41) on five when Virat Kohli’s men were 82-4 and leading by just 50 runs.

Pant was eventually seventh man out amid India losing their final five wickets for 28 runs, with Boult and Southee each striking twice in an over.

Jamieson had made two crucial early blows after India resumed on 64-2 with a lead of 32, having Virat Kohli (13) and Pujara (15) caught behind during a magnificent spell of 2-6 from seven overs.

The skipper pushes outside off and snicks Jamieson behind! India 71-3 lead by 39 runs.

Jamieson has now taken 46 wickets in eight Tests for New Zealand – it would have been 47 had Southee not shelled Pant in the cordon – and ended the final with stunning match figures of 7-61 from 46 overs.

Kohli would have hoped to play a major role with the bat on the deciding day but added just five runs to his overnight tally of eight before snicking Jamieson’s rising ball outside off stump through to Back Caps wicketkeeper BJ Watling – Jamieson removing Kohli for the second time in the game.

Pujara then clipped a ball he tried to leave through to Taylor at slip as India slipped to 72-4 – and Jamieson would have struck again 10 runs later had Southee not spurned a regulation chance to oust Pant. 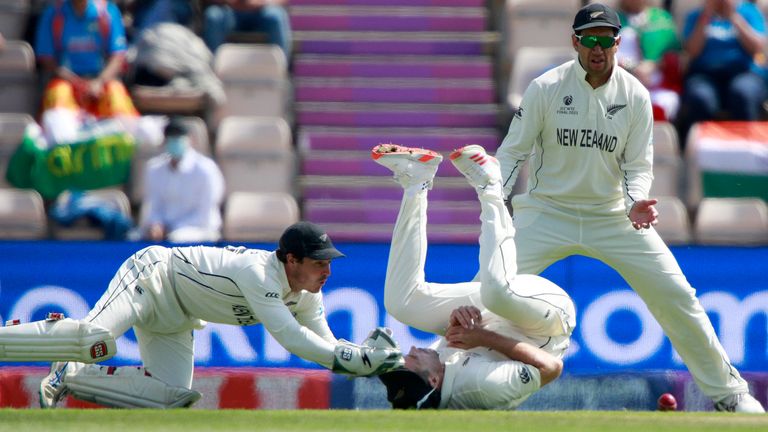 Pant went on to counterpunch, firstly alongside Ajinkya Rahane (15) and then Ravindra Jadeja (16) after Rahane gloved Boult down the leg-side one ball after crunching the seamer for four through point.

Pant’s duel with the wholehearted Neil Wagner was a fascinating watch, with the Indian happy to charge the New Zealand seamer.

Jadeja also played some pleasing strokes but his running was a little sketchy, although it was New Zealand wicketkeeper Watling who came off worse when Williamson tried to the run the India star out.

Williamson’s throw from mid-off hit Watling, who is retiring after this Test, on the ring finger of his right hand and it was later revealed that the 35-year-old had suffered a dislocation. 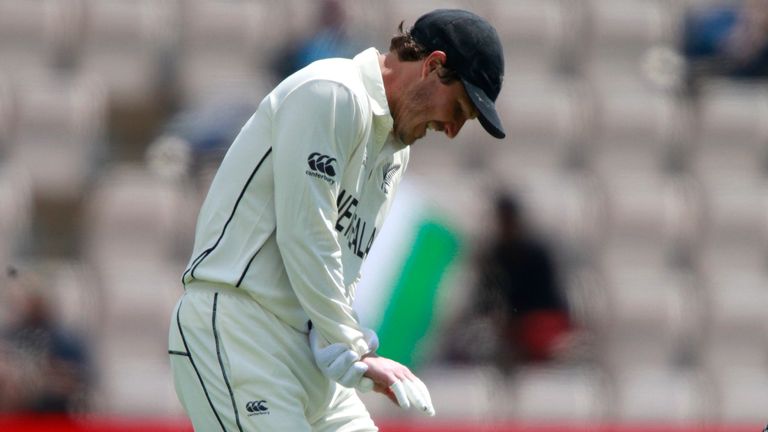 Watling carried on keeping and showed no ill-effects of his injury when he caught Jadeja post lunch, after Wagner forced the left-hander to play a fuller delivery that angled across him following a series of short balls.

Jadeja’s dismissal triggered an India slump from 142-5, with Pant’s exit – the 23-year-old caught superbly on the run by Henry Nicholls after skying Boult into the off-side – a hammer blow to India’s chances.

Ashwin (16) drove Boult to slip two balls after Pant departed, while Southee then had Mohammed Shami (13 off 9) caught at fly sip and Bumrah (0) pouched at regulation slip in the 73rd and final over of the innings.

Game very much on! 🏏

WinViz gave New Zealand an 84 per cent chance of that victory at that point but there was still time for twists and turns with Ashwin having Latham stumped and Conway lbw as the Kiwis wobbled from 33-0.

Ashwin also had Williamson given out on the sweep early in his innings but the Black Caps captain’s review proved successful, with ball-tracking showing the delivery was set to spin past leg stump.

Bumrah was then the frustrated bowler when, with 55 runs required, Pujara spilled Taylor at first slip.

Bumrah went on to smash Taylor on the helmet with a fierce delivery that reared up from back of a length – and the full New Zealand camp may now have sore heads in the morning as they celebrate a tremendous team triumph, which was sealed as Taylor whipped Shami over square leg.