Matt Hancock was interviewed by BBC Breakfast’s Charlie Stayt about all things coronavirus and the self-isolating/quarantine guidelines. However, those watching at home were unimpressed by the manner in which the interview was conducted. Discussions between the two gentlemen ramped up very quickly with some claiming Stayt “interrupted” the guest, while others suggested the host made “mincemeat” of the Health Secretary.

“Charlie not listening once again… #BBCBreakfast #whowritestheirquestions,” someone else added.

A fourth commented: “@BBCBreakfast in my opinion the interview conducted by Charlie this morning with Matt Hancock crossed a boundary and was rude and disrespectful (sic).” 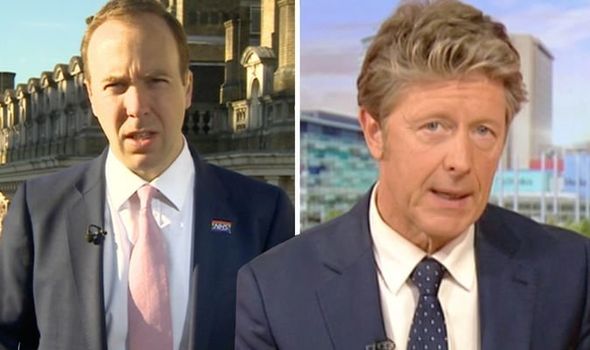 However, there were many who enjoyed Stayt’s line of questioning.

A tweet read: “@BBCBreakfast Charlie Stayt making mincemeat of @MattHancock who has no credible answers.”

“Charlie Stayt you tell him! Fab hard questioning this morning! Taking no BS from the Health Secretary! @BBCBreakfast @TVNaga01 @MattHancock,” a viewer wrote.

Someone else remarked: “@MattHancock is performing the worst ever ministerial interview on @BBCBreakfast; is it me or does he appear to be making stuff up when he doesn’t know the actual answer? Rambling and bluffing for the entire thing.”

“Some decent questions by #chaliestayt on @BBCBreakfast Another car crash interview from #matthancock trying to pretend he understands science when it comes to people flying back into UK,” another mentioned.

Hancock spoke about the science changing which therefore means the government needs to adapt their quarantine and self-isolation rules.

“There is a suggestion that there is to be a change to the self-isolation rules, the timetable which is appropriate there. Can you explain what is happening?” Stayt asked.

“The Chief Medical Officer is going to set out more details later today – on the question of those who test positive, how long they need to self-isolate for as the science on this has been developing,” Hancock replied.

“And also, because we want to take a precautionary approach to make sure we can keep people in this country as safe as possible.”

The Health Secretary then spoke about the most recent developments: “We can see sadly, a second wave of coronavirus that’s starting to roll across Europe.

“The number of cases is going up again and we want to do everything we can to protect people here and protect people from that wave reaching our shores.”

On several occasions, Stayt interrupted Hancock, but the guest was adamant he was going to finish his sentence.

“I was just going to answer – to continue finishing my answer,” the politician hit back at one point.

Another time, Hancock replied: “No, no I am going to answer this!”

BBC Breakfast airs everyday at 6am on BBC One.