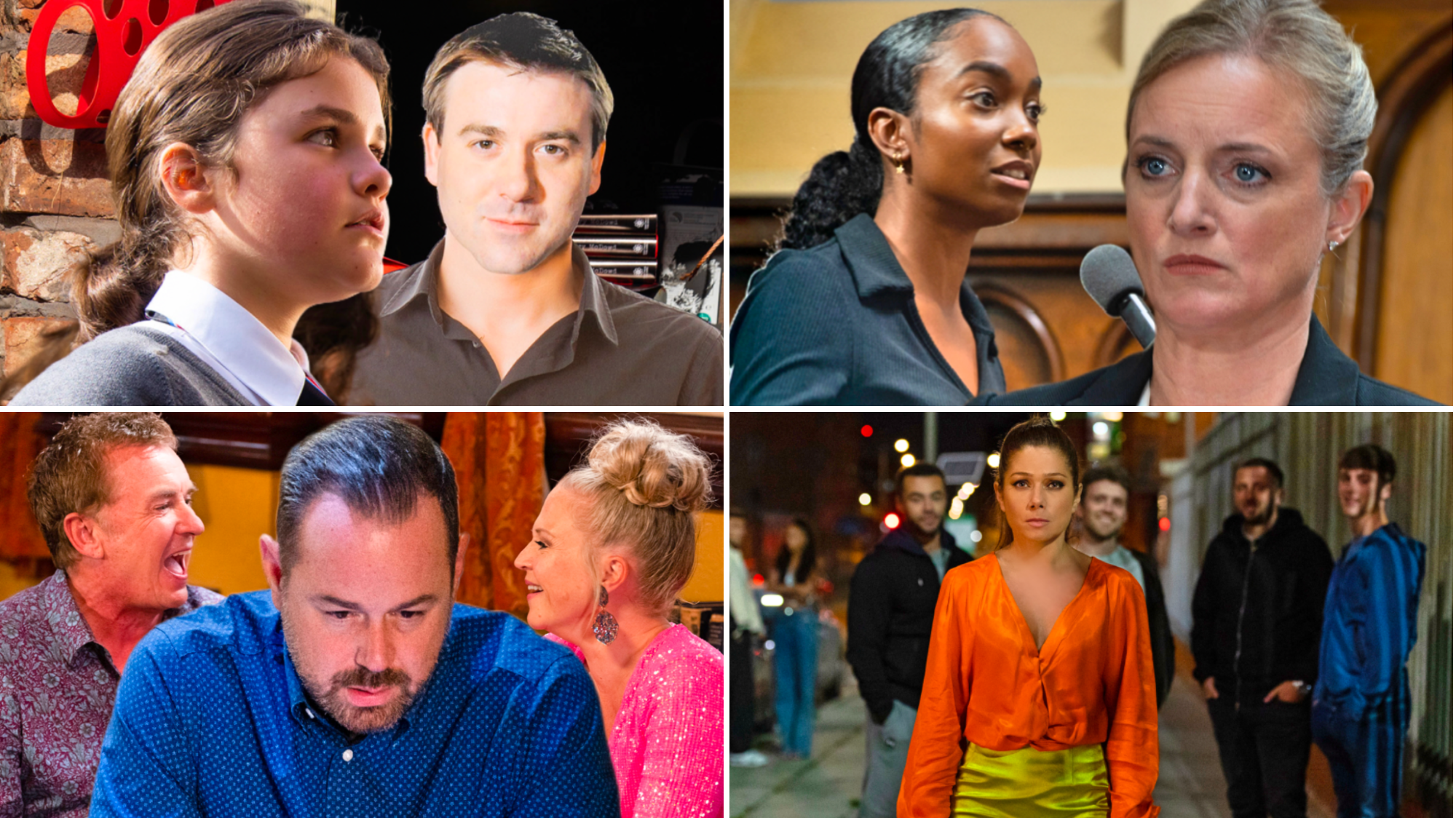 Strap yourselves in, soap fans! Next week is going to be another high octane one, with shocks and surprises in store for some of the genre’s finest.

Tyrone Dobbs once again fails to control his anger in Coronation Street over the whole John Stape saga and his actions this time result in him being arrested – not once, but TWICE!

Hope, meanwhile, finds a surprise in her outhouse.

Over in EastEnders, Mick Carter paints on a smile amid his engagement to Janine Butcher, but he’s soon tested when Alfie Moon and Linda spend some time together.

Is Janine really the woman he loves? Or is it Linda who still holds his heart?

Emmerdale, meanwhile, sees Nicola King receive a verdict after a tense trial, but will she finally get the justice she deserves?

And Hollyoaks’ Maxine Minniver features in a big week for the Channel 4 soap, which explores women’s safety via an important episode that is not to be missed.

For all this and more, Metro.co.uk has you covered, so take a look at what’s ahead in the form of this week’s spoiler guide.

Tyrone attends a Q and A with the author of the John Stape book, who implies Fiz was complicit in her husband’s murders. Tyrone attacks the author and is arrested as a result. Fiz manages to convince the journalist to drop the charges, but the situation is soon taken out of their hands when the video goes viral, with Ty being arrested for assault once more!

With both Fiz and Ty having failed to stop the book from being published, Tyrone heads to the local bookstore and buys all the copies – and the cardboard cutout of John! Hope, meanwhile, is on to her parents and thus she kicks open the door of the outhouse, where she comes face-to-face with the cardboard cutout!

Sam explains to Roy how he’s been reading about restorative justice and that he wants to visit Harvey in prison – and wonders if he’d go with him! Roy tells Nick, and Leanne urges him to consider letting Sam visit Harvey, adding that it might give him closure. But what will Nick decide?

Todd calls at the flat and is shocked to find Summer’s moving out, and Billy admits to him that he’s been far too overbearing. Todd, however, tells Summer that Billy’s really hurt, and thus Summer tells her dad how much she loves him – and how much she’ll miss living with him.

Suki decides to stand by Nish after she finds him preparing a meal for the family, but their happiness is short-lived as the police arrive to arrest Suki for Ranveer’s murder! The Panesar’s fret as Suki is questioned by the police and Kheerat points the finger at Ravi, who is nowhere to be found.

Mick and Janine are engaged! Linda, having made the discovery for herself, lets the news slip to Shirley, who is fuming. Shiril makes it her mission to put a stop to the wedding. Mick, meanwhile, proposes properly to Janine, who is on cloud nine.

Linda is all set for a blind date after Sharon does some organising, and Alfie offers her words of encouragement. When her date fails to show, Alfie steps in to buy Linda a drink, which leaves Mick annoyed. Mick subsequently lets Alfie go from the pub, but Alfie asks him if it’s really Janine that he’s in love with, which hits a nerve.

Callum encourages Ben to tell Lexi the truth about Lola’s prognosis but Ben is more concerned with doing research and finding her treatment options. At the hospital, everyone rallies round Lola and Callum suggests that Ben move back in with him to help support Lexi. Lola is touched by the support.

Nicola’s day in court arrives, and Saskia’s barrister runs rings around her while she’s on the stand. Naomi, meanwhile, is left feeling as though she might go down, and matters are made worse when a manipulative Saskia threatens to drag her family into it if she doesn’t change her version of events.

Kim is delighted that she’s got her family back again as she offers Dawn and Billy free lodgings. Billy and Dawn, overwhelmed, accept the offer.

Having collected Liv’s ashes, Vinny is sat with Chip feeling lost and depressed as he comes to the realisation that Liv is never coming back.

Maxine, Theresa, Verity and Zoe boycott a series of local bars and enjoy a night out in Liverpool, but things soon get messy when Verity sneaks a secret hip flask into the club.

Maxine gets separated from her friends and is thrown out of the club, and as navigates her way home alone without money or a mobile phone, she is violently attacked.

The special outing of the Channel 4 soap will see Maxine examine whether different choices she had made during the evening would’ve changed the outcome.