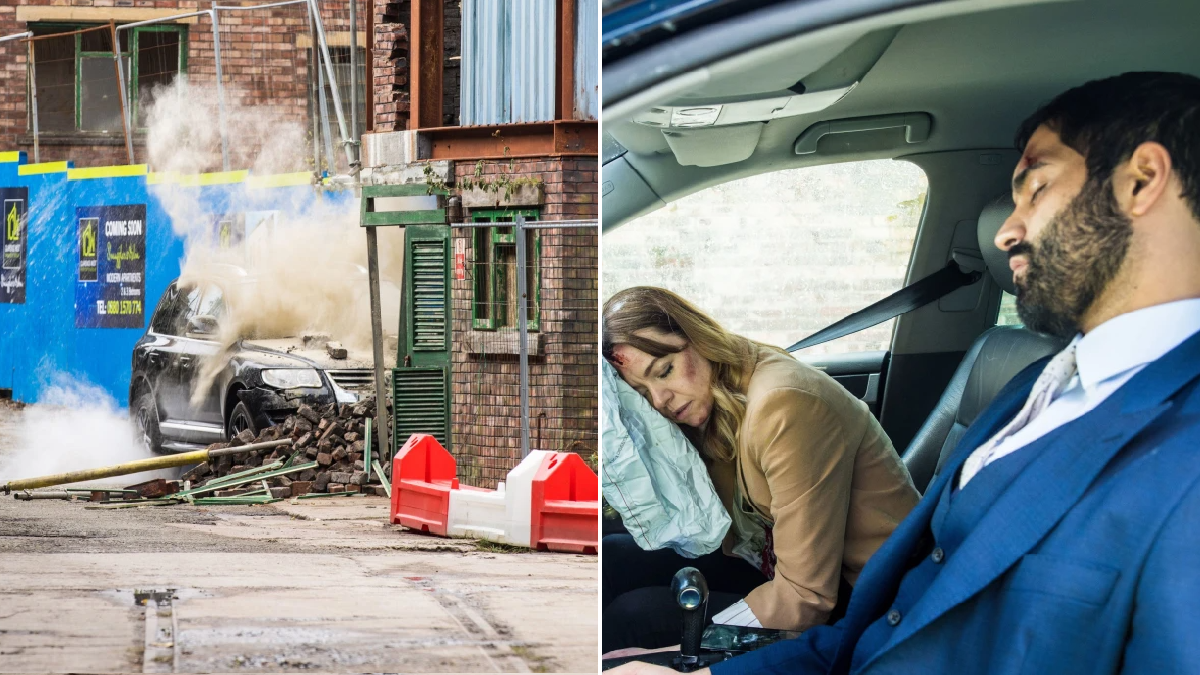 The catastrophic scenes will air next week and the imagery paints a very bleak picture for the doomed couple, already estranged after recent events.

With Abi Webster (Sally Carman) attempting to escape with her son Alfie, Toyah and Imran are in hot pursuit.

But a tragedy unfolds when their car smashes into a wall, leaving them in a bad way.

Viewers can see that the crash is a very serious one as dust rises from the mangled vehicle.

And there is initially a lack of response from driver and passenger in the direct wake of the impact.

When Imran comes round, Toyah remains lifeless and he pulls her free of the wreck but it might be too late.

Begging her not to die, Imran is in a state, his battle with Abi ending in a much worse way than anyone could have anticipated.

‘It was amazing!’ Georgia said of filming the stunt scenes. ‘We had a whole week on location which is really rare.

‘Mainly Charlie and I had brilliant stunt doubles, our team then an amazing stunt team – director David Kester has worked here and on all the soaps for years and is hugely experienced and so we were all excited about it.’

Adding more details on what was involved, the actress continued: ‘We had stunts, drones, he threw the kitchen sink at it.

‘We felt like we were doing our own little film for a week, it was Corrie but feels different like an exciting short film.

‘There were lengthy scenes driving on a low loader round Manchester. Driving past tram stops and people staring at us but by the time we’d driven round for the eighth time they’re totally over it!

‘Everyone pulled together, there was a lot to do, it was an ambitious schedule but we got through it. It felt exciting and it was a privilege to be a part of.’