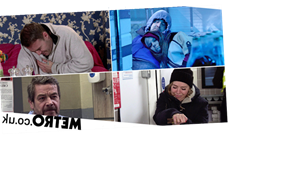 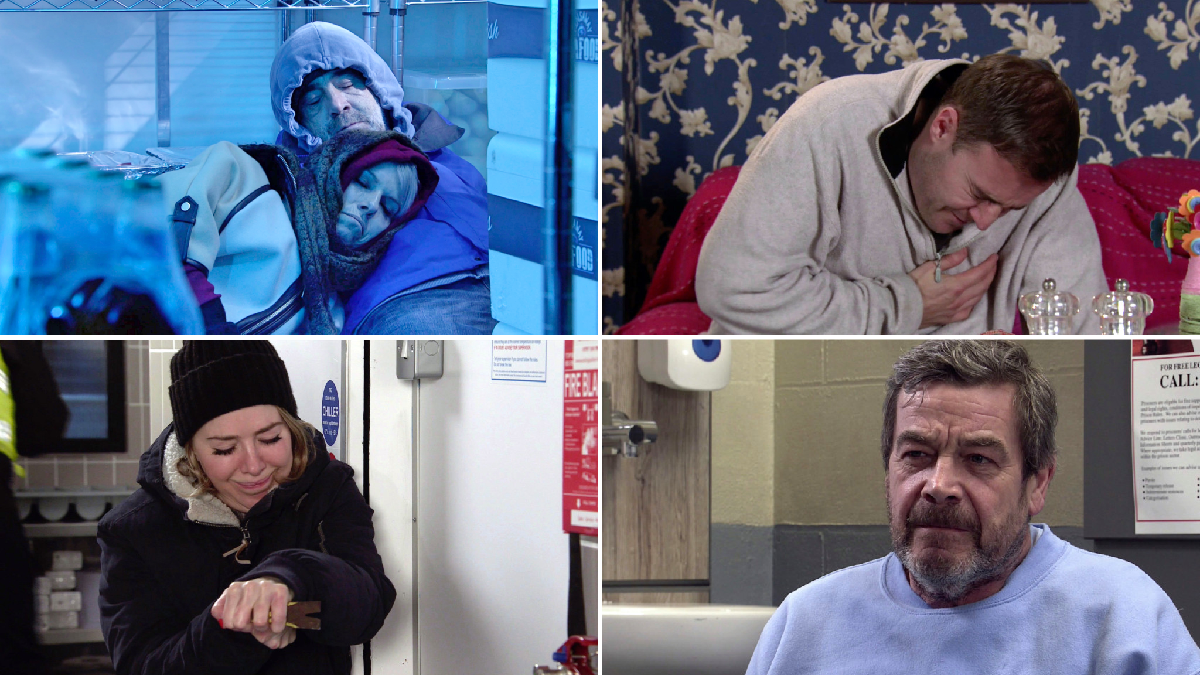 There are chilling scenes ahead for Kevin and Debbie Webster (Michael Le Vell and Sue Devaney) as they remain trapped in a walk in fridge in Coronation Street – will they die and will Ray Crosby (Mark Frost) get away with murder?

Elsewhere, Leanne Battersby (Jane Danson) takes a turn for the worse – and lashes out at Simon Barlow (Alex Bain).

With Abi expecting home from camping, she doesn’t realise how much danger Debbie and Kevin are in. Abi heads to the Bistro to confront Debbie but will she find her and Kevin locked in the fridge?

Fiz returns from visiting Gary and tells Tyrone that he is enraged. He has insisted that she finds the £600. Tyrone suddenly grips his chest in agony and falls to the ground.

Billy reveals his plans for the church to Todd and Todd has an idea, suggesting he should sell the church pews.

Johnny hallucinates and sees the cat again and Gary is concerned. Johnny reassures him he is seeing a psychiatrist – and he later gets a diagnosis.

Leanne is about to book another session with Crystal Moon but Simon is left suspicious.

Fiz and Evelyn wait for news on Tyrone – but he emerges and says it was heartburn. Evelyn and Fiz discuss a new healthy regime for Tyrone, leaving him downhearted.

Debbie and Kevin have a heart to heart about their childhood. The police tell Abi that Kevin and Debbie are missing still. Abi then breaks into the bistro and finds the signed contract on the floor.

The police question Ray and he suggests that they have run away together with his money.

Billy tells Todd that the church is happy with the plans. Todd reveals that he has found a buyer – but what is he up to?

Simon confronts Leanne with her phone records and tells her that Crystal Moon is a fraud.

Johnny admits to Jenny that he doesn’t want the hallucinations to stop as he is comforted to see Aidan.

Kevin drags Debbie to her feet as she starts to pass out. Abi confides in Seb that Kevin and Debbie may have fled. Debbie slips off unconscious. Abi enlists Faye’s help. Hypothermia takes hold of Kevin and he too passes out – but Abi and Faye hear him slump to the floor.

Billy and Todd discuss the church pews sale – Paul tells Todd that he is going to quit his job. Ed hears that Paul is looking for work and makes an offer.

Leanne admits to Simon that her grief for Oliver is getting worse. Jacob offers Simon another drugs delivery job.

Michael researches alternative birthing methods but Grace is unimpressed. Tyrone buys himself a yoga mat but Fiz accuses him of wasting money.

Abi frantically tries to smash open the door and she finds Kevin and Debbie unconscious. Kevin stirs and tells Craig and Faye that Ray was the one who locked them in. Meanwhile, Ray is released and prepares to flee but will he get away? Later, Abi proposes to Kevin.

Leanne finds another feather and Simon tells Jacob that he won’t do the delivery. Jacob calls his boss while Nick worries about Leanne when she tells him about the feathers.

Summer tells Paul she’d like to go on a day out together while Ed makes another offer to give him work. Later, Todd takes the wind out of Paul’s sail.

Ed and Michael are excited by a visit from Uncle Ronnie but Aggie is left unimpressed.

Fiz and Evelyn rib Tyrone as he heads off for a yoga lesson.

Leanne shows Simon another feather and asserts that his way of communicating. Outside, she drops a feather and is nearly knocked over as she chases her. Brian makes a revelation about the feathers and Leanne slaps Simon when she realises he has put the feathers around to try and ease her pain.

Ronnie arrives at the Baileys but as the brothers reminisce, Aggie is on edge and makes an admission to Grace. Ronnie reveals he is looking to move to Weatherfield.

Peter is irritated to find Steve keeping watch. James tells Ed that he might be transferred. George confides in Eileen and Mary that he has a driver down – so no-one to drive Ted’s hearse so Eileen suggests Steve or Tim.