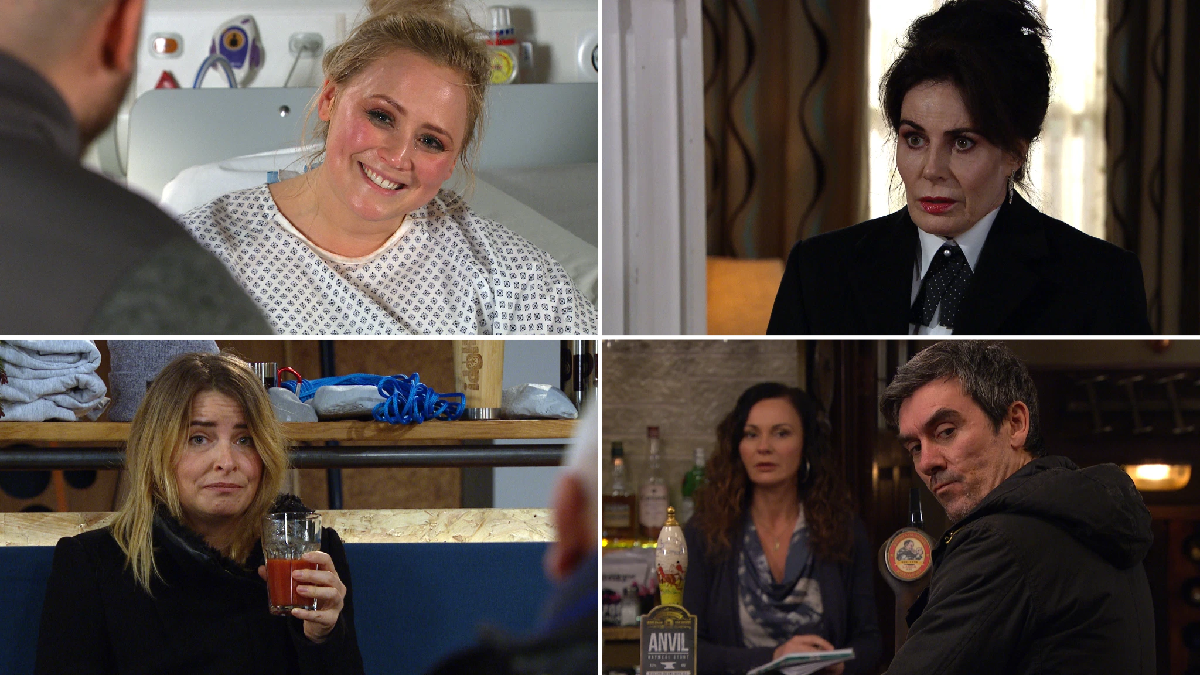 There are Emmerdale arrivals old and new as Faith Dingle (Sally Dexter) rocks back into the village in a stolen hearse – with stories and apologies to share. But Cain (Jeff Hordley) is having none of it.

Nicola and Jimmy are being secretly watched by Juliette who makes an approach to Carl to go with her. She later warns Nicola that she plans to involve a solicitor but Jimmy sticks to his guns. However, Juliette slips Carl her phone number.

Laurel frets about Gabby’s involvement with the Tates and admits to Jai that she is scared of losing Gabby.

Carl goes missing again and Jimmy is convinced that Juliette has kidnapped him but Angel reveals Carl went of his own accord. When Juliette arrives, Jimmy wants her arrested but Juliette gets the upper hand and later, she meets with Nicola.

Charity continues to be shunned. She decides to sign the documentation over for the Woolpack and Chas feels bad about her exclusion.

Jamie is unnerved that Mack knows his information. Manpreet is crushed when Rishi rejects her. He later takes advice from Charity.

Nicola and Juliette are interrupted by a furious Jimmy and he turns on Nicola, feeling betrayed.

Laurel is hurt when Jai confides his fears in Rishi as he makes checks that she is not hiding alcohol.

Cain accepts a night away and Nate feels the pressure of looking after the kids as Tracy supports him.

Moira looks forward to a night alone with Cain as he drops off the kids with Nate. As Cain heads to leave, Tracy goes into labour and he and Nate rush over. Nate is in a panic as they arrive at the hospital.

Meanwhile, Moira is understanding when Cain calls. Later, she runs into Faith – who has stolen a hearse.

Moira wants answers from Faith, who is desperate to get away. An undertaker heads over and Faith heads away in the hearse. Moira finds Faith back home and puts on a brave face – she wonders if Cain will accept her back. When he arrives, he is disgusted to see her and kicks him out.

A midwife reassures Tracy as she goes through labour while Nate is overwhelmed. But Cain gives him a pep talk and bond – leading to Nate being by Tracy’s side as they welcome their daughter.

Jamie is surprised when Gabby announces that she is moving to Home Farm.

Chas is stunned to see Faith in a parked hearse. Chas admits she missed her but Cain doesn’t want her to stay. Chas suggests Dingle court – but what will the family decide?

Gabby tells Laurel that she is moving to Home Farm, leaving her extremely worried.

Paul suggests a meal with Mandy and Vinny tries to cheer his dad up when Mandy reminds him they are taking things slow.