Rylan is co-hosting all of the semi-finals with BBC Radio 1 presenter Scott Mills for the UK  on the Eurovision Song Contest this week.

The pair were busy bouncing off each other, and shared a number of hilarious jokes and tweets during the show, both noting how much of a good time they’ve had this week in Tel Aviv.

Yet some of the live on-camera segments proved a little bit more difficult, as was later proved when Rylan tried to speak to the commentators for Russia.

The segment began when Rylan decided to let viewers in on what goes on backstage in the commentators’ boxes.

“So guys I’ve snuck out of my commentary box and I’m going to try and show you something we’ve never showed you properly,” he shared excitedly.

“So this is our actual balcony, all the guys are over there. You don’t normally get to see this, because we’re the only ones who get it. No other country!” Rylan continued. “But Australia have just performed.”

Getting distracted, Rylan suddenly went off-piste to say: “Sorry I’ve just seen my hair, look what those headphones have done to my hair! Not happy about that.”

“Shall I go in this one?” the presenter then asked his production team about Australia’s door. “I can go in this one can’t I? Yeah?”

“Oh my goodness we’re so proud we’re nearly weeing ourselves with pride,” Myf cried. “So so incredibly good wasn’t it?” 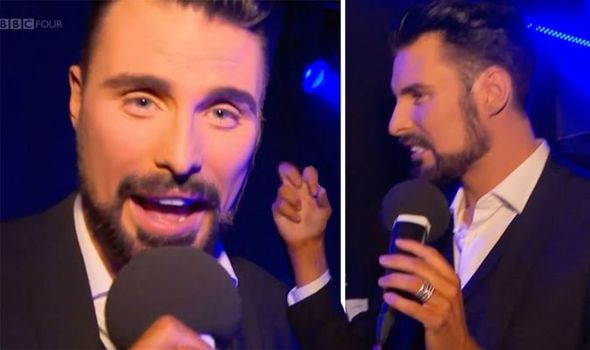 No, no, I’m not gonna knock on that one

“Now gonna have Eurovision in European country, Australia,” Joel joked with a giggle.

The trio continued to chat over whether Rylan had been Down Under, but when he admitted he’d never had the chance the commentators urged the UK to vote tonight, which they can’t.

“We can’t vote tonight!” Rylan reminded the pair, as Joel teased they always vote for the UK.

“Ok now they’re playing tactics,” Rylan finished. “Come on get back to work, get back in your box. Get out of it.”

“Love them guys,” the host then told viewers,” but as he went to knock on Russia’s door, he was suddenly stopped in an awkward moment.

“Oh, Russia still…” Rylan began, grasping the door handle, when he was stopped in his tracks.

“No, no, I’m not gonna knock on that one,” the commentator stuttered, having presumably been ordered not to continue by someone in his ear.

Rylan continued on, but it wasn’t long before it was time to get back to the jam-packed show.

Also during the first semi-final, the main presenter was sabotaged by her co-host and ended up telling him  to “go” as she stumbled upon her lines.