This week on NBC’s La Brea, Eve’s race to save Josh’s life was on, while Gavin plotted to learn when his wife and son are.

IN THE LAND DOWN UNDER….

Having come face-to-fanged face with a sabre-toothed tiger, Eve, Sam and Ty did not simply seek cover in the big, metal ambulance (as one TVLine reader reco’d), but instead decided to make a run for it — because one of the show’s mysteries apparently is how humans traversing unfamiliar terrain can outpace apex predators in their natural environment.

And yet escape they did, by fending off one tiger with shots from Ty’s gun and then scrambling down to a cliffside ledge to evade another. But just when they thought the coast was clear, a tiger returned to pounce at Sam, knocking him off a cliffside to… where? Eve and Ty forged ahead, only to realize that she was carrying the wrong knapsack — that Sam had with him the antibiotics and such. They located a howling Sam, who had hurt his back, badly, in the fall, and as such had to be lugged by both Eve and Ty back to camp. But when it started getting late — and as we saw back at camp, Josh’s infection was spreading rapidly, sending him into shock — it was agreed that Eve would hightail it to her son. In doing do, she caught some flack from Riley for “abandoning” her injured dad, but Eve gave Josh the meds he needed, while Ty and hobbled Sam got an assist from a new acquaintance named Lucas (Josh McKenzie).

Lucas, it was confirmed in the closing moments, is the man whom Marybeth-the-cop had spent the episode looking for, after spotting the car that has heroin bricks in the trunk. She had followed Lucas to Los Angeles, tipped off that he was looking to make a score — because he is her son.

In the course of Mary’s search, we also got to know Veronica and Lilly Castillo (Lily Santiago and Chloe De Los Santos), the girls whose father got mauled and dragged away by a dire wolf in the premiere. Veronica enlisted Scott-the-stoner to help find her dad’s body for a proper funeral, and along the way Scott (who does anthropology research for the titular mesum) gleaned that they were in fact near said tar pits. And based on the caravan of camels he saved from getting sucked into the pools of black goop, they had landed in approximately 10,000 B.C. Shortly thereafter, Scott and Veronica found her father, whose corpse had been laid inside an arrangement of rocks that formed the recurring “handprint” motif. Also: Veronica claims that her kid sister doesn’t speak, when actually she does (but the gals are hiding somethingoranother). 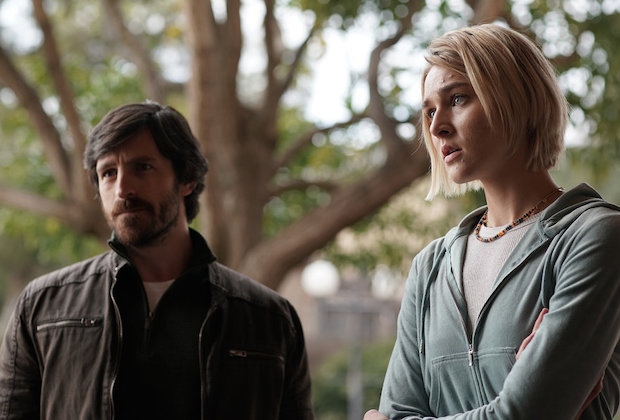 Dr. Nathan lobbied her superiors at DHS to authorize a deeper exploration of the sinkhole and the “light” inside it, but they refused to do so unless there was proof of survivors. Gavin meanwhile reached out to a science dude he saw being interviewed on the news, explaining his wild theory/”visions” and asking for Eve’s unearthed ring to be carbon dated. Science dude begrudgingly agreed, but Gavin later learned that the ring had been seized by DHS. Just then, scary SUVs pull up to Gavin’s home to scoop him up and deliver him to Dr. Nathan.

Dr. Nathan touches on her theory about the “light” and how her hands are tied without proof of life — but carbon dating has revealed that Eve’s ring dates back to about 10,000 B.C. When Gavin wonders how he formed this “connection,” Dr. Nathan notes that his 2018 jet fighter crash was at same time of and nearby the government’s discovery of a sinkhole/”light” in the Mojave Desert. Thanks to Gavin’s “visions,” she is ready to deploy a manned exploration drone outfitted for a journey into the L.A. sinkhole, and she wants Gavin to help.

What did you think of La Brea “Day Two”?