Home » TV & Movies » Netflix Just Renewed ‘Russian Doll’ for Season 2, and Now I Have That Song Stuck in My Head

Netflix Just Renewed ‘Russian Doll’ for Season 2, and Now I Have That Song Stuck in My Head

In the best news since Nadia Vuvlokov discovered that it’s no longer her birthday, Netflix has just picked Russian Doll up for a second season! If you haven’t yet seen the super-dark but super-hilarious comedy created by Amy Poehler, Natasha Lyonne, and Leslye Headland, you need to get on it immediately. It’s so ridiculously good. Even if you have seen it, you should rewatch because it’s loaded with Easter eggs. Anyway, here’s everything you need to know about the new season.

Natasha Lyonne announced the news in the most perfect way ever.

Natasha (aka Nadia) casually re-created the most infamous scene from Russian Doll to let us know that season 2 is on the way. Sure, this bathroom is significantly less cool than the one from her birthday party, but I’ll take it.

The last episode might have a few hints for season 2.

Remember at the very end of the last episode, when there were a few Nadias marching through the city? It left the ending of the season up to interpretation, but Natasha says:

“There’s always a million yous walking around,” she told Thrillist. “It just depends on which one you’re going to put on today. It raises the question of how many versions [of the characters] are there all together? That’s certainly something that was considered.”

Then she mentioned the whole video-game connection to the show. “In this video-game sense, it presents a question of do they in fact enter a whole new sort of scenario in that moment that they kind of completed that round?”

If this means that Nadia and Alan are going to have to go through that shit all over again…I’m going to need to meditate in between episodes…or something.

When Amy, Natasha, and Leslye originally pitched Russian Doll, it was intended to be three seasons.

“We definitely pitched it as this three-season idea, and yet it’s so interesting to think about how that shapes and morphs in the time since making it,” Natasha told the Hollywood Reporter. “Who knows if we’ll be lucky enough to go back down the rabbit hole. That’s tomorrow’s question. But I think we have some ideas.”

So, it sounds like they kind of have this whole story figured out, and Netflix just needs to give them the green light.

Natasha Lyonne will definitely stay in the cast.

There haven’t been any official casting announcements, but Leslye has assured the world that Natasha will stick around to play Nadia.

“When initially pitched, Nadia was a presence throughout all three of [the proposed seasons],” she told The Hollywood Reporter. But…don’t get too excited just yet. She also says that she won’t return in the way that we might expect her to.

“It was not in a very conventional way, if that makes sense. She was always a presence, as we knew Lyonne would always be the beating heart and soul of this show. Whether she was being haunted or she was haunting the narrative, she would be there.” 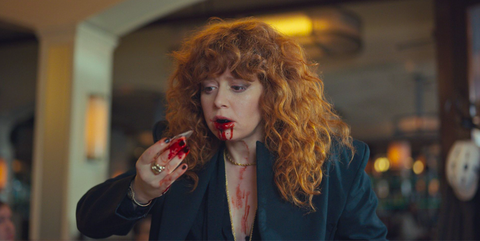 Uh…does that mean Nadia will become a ghost? I have questions.

There’s no release date yet.

Netflix literally JUST announced season 2, so in terms of a release date, they’re not there quite yet. If I had to look into my nonexistent crystal ball and make a wild guess, I’d assume that we shouldn’t be expecting anything until the very beginning of 2020, as season 1 dropped in February of this year.