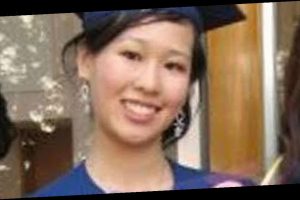 Over the years The Cecil Hotel has been the site of dozens of deaths, murders and hauntings – and it has also been the home of several serial killers for a time.

The creepy, compelling and fascinating four-part series includes commentary from individuals like Amy Price, former Cecil Hotel manager from 2007 and 2017 and retired Los Angeles Police Department homicide detectives, in a bid to find out what happened to Elisa.

Elisa, a student at the University of British Columbia, booked herself into the Los Angeles hotel on January 26 2013 – after which she mysteriously vanished.

The 21-year-old student’s last moments alive made international headlines after a video of her going in and out of a lift at the hotel went viral.

Elisa, who was diagnosed with bipolar disorder, was acting bizarrely, making erratic and odd hand gestures.

The video was watched by millions, which resulted in amateur sleuths trying to figure out what happened to Elisa.

What happened to Elisa Lam?

Elisa was eventually found in a water tank of the roof of the Cecil Hotel, with her clothing floating in the water.

The series goes into a number of theories about what happened to Elisa.

Authorities found no evidence of physical trauma in her autopsy report, and there was no presence of alcohol or illegal drugs.

An LA coroner issued a finding of accidental drowning, with bipolar disorder as a significant factor.

While there were never any suspects tied to her death or disappearance, there are several theories as to what happened to her.

One theory was that it was a copycat murder of the the Jennifer Connelly and Tim Roth horror film Dark Water.

In the 2005 movie, discoloured water comes out of hotel taps and a girl falls into the water tank.

There was also speculation that Elisa’s death was linked to an outbreak of tuberculosis in Skid Row at the time.

Lam-Elisa is the name of a type of TB test and she studied at Columbia University where there is a tuberculosis research centre.

Another much discussed theory is that the death metal musician Morbid was behind her death, because he had stayed at the hotel and his lyrics included a girl dying in water.

Morbid, real name Pablo Vergara, said: “I was in Mexico recording my album at the time she went missing.

“I received death threats every day. There was no escape. I tried to take my life and I woke up in a psychiatric hospital.”