This calls for some celebratory champagne! Only Murders in the Building has been renewed for Season 3, Hulu announced Monday.

Only Murders Season 2 Clues and Suspects 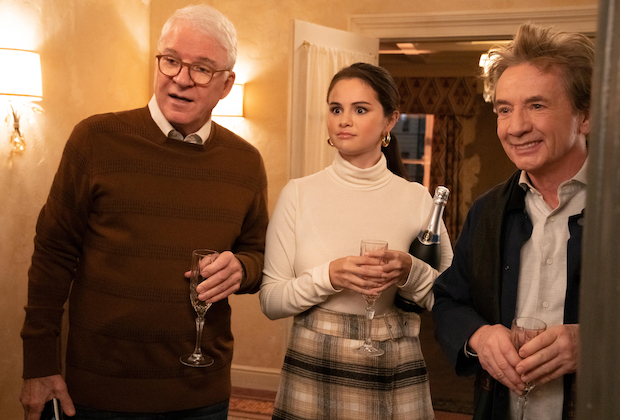 “Only Murders in the Building is the true crown jewel of our slate,” Hulu Originals and ABC Entertainment president Craig Erwich said in a statement. “Its appeal across generations, the intersection of humor and heart, and its truly original approach are a hallmark of and testament to [executive producers] Dan [Fogelman], John [Hoffman], Steve [Martin], Marty [Short] and Selena [Gomez’s] work. We are grateful to be able to continue telling the stories of Charles, Oliver and Mabel to viewers that have consistently shown us they crave more of this story.”

At the end of Season 1, Charles, Oliver and Mabel were taken into custody for the murder of Arconia board president Bunny Folger. In Season 2, the amateur sleuths find themselves on a race to unmask Folger’s killer, during which a number of unfortunate complications arise: Not only have they been publicly implicated, but they’re now the subjects of a competing podcast, Cinda Canning’s Only Murderers in the Building.

In addition to Martin, Short and Gomez, the Season 2 ensemble includes Cara Delevigne as art world insider Alice Banks, Shirley MacLaine as Bunny’s mother Leonora and Amy Schumer as a heightened version of herself (and the current occupant of the penthouse that previously belonged to Sting).

The renewal comes just three episodes into Only Murders‘ Season 2 run, which wraps Tuesday, Aug. 23. TVLine’s Streaming Scorecard has been updated to reflect the early pickup.

Are you looking forward to even more Murders in the Building? Sound off in Comments.