Our Girl was full of drama this evening when it returned to BBC One with episode three of season four. The squad was back in Afghanistan where they were tasked with tracking down Omar. After a successful mission, spirits were high as they returned to camp, but on the way back they were ambushed. In the free-for-all shoot out they managed to escape, but Fingers (played by Sean Ward) had got caught in the crossfire and suffered a bullet wound to his rib. With the instalment ending on a tense cliffhanger, viewers feared the worst for the fan-favourite character, but what if his fate had been sealed by an earlier symbolic clue?

Earlier on in the episode, Georgie Lane (Michelle Keegan) was seen breaking down, when reminders of the life she was meant to have with her beloved Elvis Harte (Luke Pasqualino) came flooding back.

Taking a step outside the tent, the moment to herself was interrupted by brother-in-law Fingers who asked her why she was crying and the two characters shared a beautiful scene.

“What are you up to?” Fingers asked and after silence he started to ramble: “Stars hey, freaky isn’t it, billions! Have they got more stars here than they have in Lanzarote?”

“You alright?” He asked when he noticed she started to cry. “Georgie, what’s up man?” 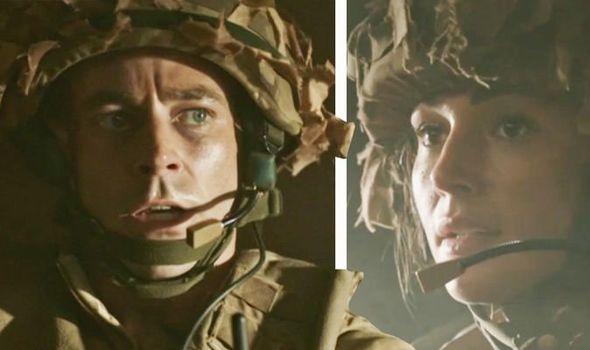 “I just thought I had everything in this little box in my mind I never had to open again,” she explained through tears.

“Listen, I knew this was gonna be hard, I did. But I keep being reminded of Elvis, he was so alive, he is so alive here.

“Fingers I just miss him so much. I don’t think I can do this anymore fingers, I don’t,” she blubbed.

“Don’t pack up on this Georgie,” Fingers begged. “You’re the grownup babe. You’re the one who’s got their sh*t together. Come on, come on. You’re Georgie Lane, alright?” 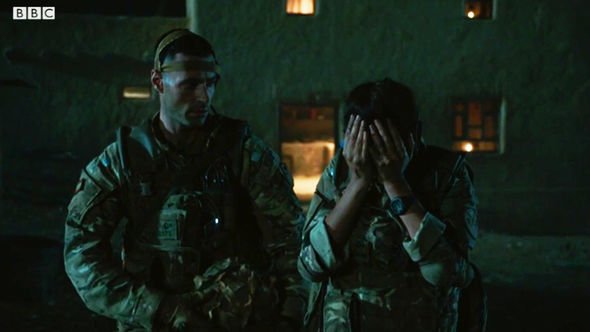 Contrastingly, the final scene saw Georgie notice there was a “man-down” in the vehicle.

“Is everybody alright?” Georgie asked around and they all replied yes.

“Well done Throbber, never do anything that stupid again understood?” Sergeant King (Rolan Bell) commanded after he volunteering himself to run out into the gunshots to bring the vehicle closer for them to retreat.

“Don’t know how many of them were up there firing down on us!” Prof (Nico Mirallegro) commented. 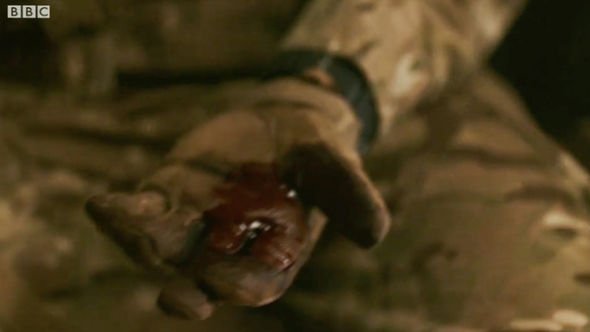 But Georgie was focused on Fingers, who removed his hand from his ribs and she saw the blood.

Unable to tell her what was wrong, Georgie moved closer: “Fingers has been hit. Man down! Man down! Fingers can you get down?

“Ive got you just keep breathing. It’s alright mate,” she muttered as she started to work on him and block the wound.

The camera saw an anguished Fingers fighting for his life as flashbacks reverted to the day of his wedding, looking down at his bride.

The screen then went black and a “to be continued…” flashed up meaning viewers had to wait until next week to find out whether or not he survived the gunshot. 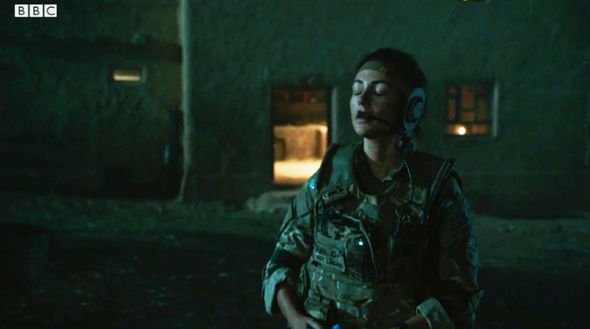 However, while many were distraught with the fact Fingers could be dead, there was one viewer who suggested he may not be killed off following other events in the episode.

Before they completed the mission to find Omar, Georgie and Mimi (Amy-Leigh Hickman) assisted a local in giving birth to a baby.

The moment the newborn came into the world, its father was killed.

“This was quite symbolic.A life being brought into the world (the child) but another life being taken out of it (the father)…#OurGirl,” a tweet read.

With a death already occurring in the show, would they take another life in the form of Fingers?

“No! You cannot end the episode like that and not give a preview for next week #OurGirl,” a distressed fan argued.

Someone else wrote online: “How am I meant to wait 1 whole week for next episode, I can’t deallllll #OurGirl.”

“Okay so im crying at #OurGirl again, the moment between fingers and georgie broke my heart the acting is so good what @michkeegan @seanjward @TheOurGirlArmy,” another added.

Our Girl returns next Tuesday on BBC One at 9pm.