Home » TV & Movies » The Fabelmans Is a Best Picture Oscar Frontrunner, But Spielbergs Latest Could Be a Crafts Player, Too

The Fabelmans Is a Best Picture Oscar Frontrunner, But Spielbergs Latest Could Be a Crafts Player, Too

While “Top Gun: Maverick” and “Black Panther: Wakanda Forever” are expected to be Oscar craft juggernauts (“Avatar: The Way of Water” and “Babylon” are still TBD), don’t discount Steven Spielberg’s semi-autobiographical “The Fabelmans” as a major contender as well. That’s because of its status as Best Picture frontrunner (winning the influential TIFF People’s Choice audience award) and great craftsmanship in recreating the celebrated director’s troubled coming-of-age in the ’50s and ’60s and his early brilliance as a filmmaker.

“The Fabelmans” is obviously special to its director: The tribute to his late parents — computer engineer Arnold Spielberg and concert pianist Leah Adler — is his most personal film to date. (It was also made during the COVID-19 pandemic, which forced Spielberg to grapple with his own mortality.) The fictionalized cinematic memoir is filtered through alter ego Sammy Fabelman (Gabriel LaBelle), an aspiring director who falls very under the spell of the movies at an early age (when he’s played by Mateo Zoryon Francis-DeFord). Caught in a tug-of-war between artistic, free-spirited mom Mitzi (Michelle Williams), and scientific, workaholic dad Burt (Paul Dano), Sammy learns to use the camera for empowerment. Uprooted from New Jersey to Arizona and later to Northern California, Sammy’s adventures in fractured suburbia, family dissolution, and the joys of directing provide us with a visual and thematic roadmap for understanding Spielberg’s past work.

As always, the director was joined by his veteran, Oscar-winning crafts teams, but this time was different. As the director said at TIFF: “I’ve always been able to put a camera between myself and reality to protect myself and I couldn’t do it telling this story.” That’s where his entrusted crafts teams came in. They understood the biographical importance of the story and were well equipped to go on this meta journey with Spielberg given their personal history with him. 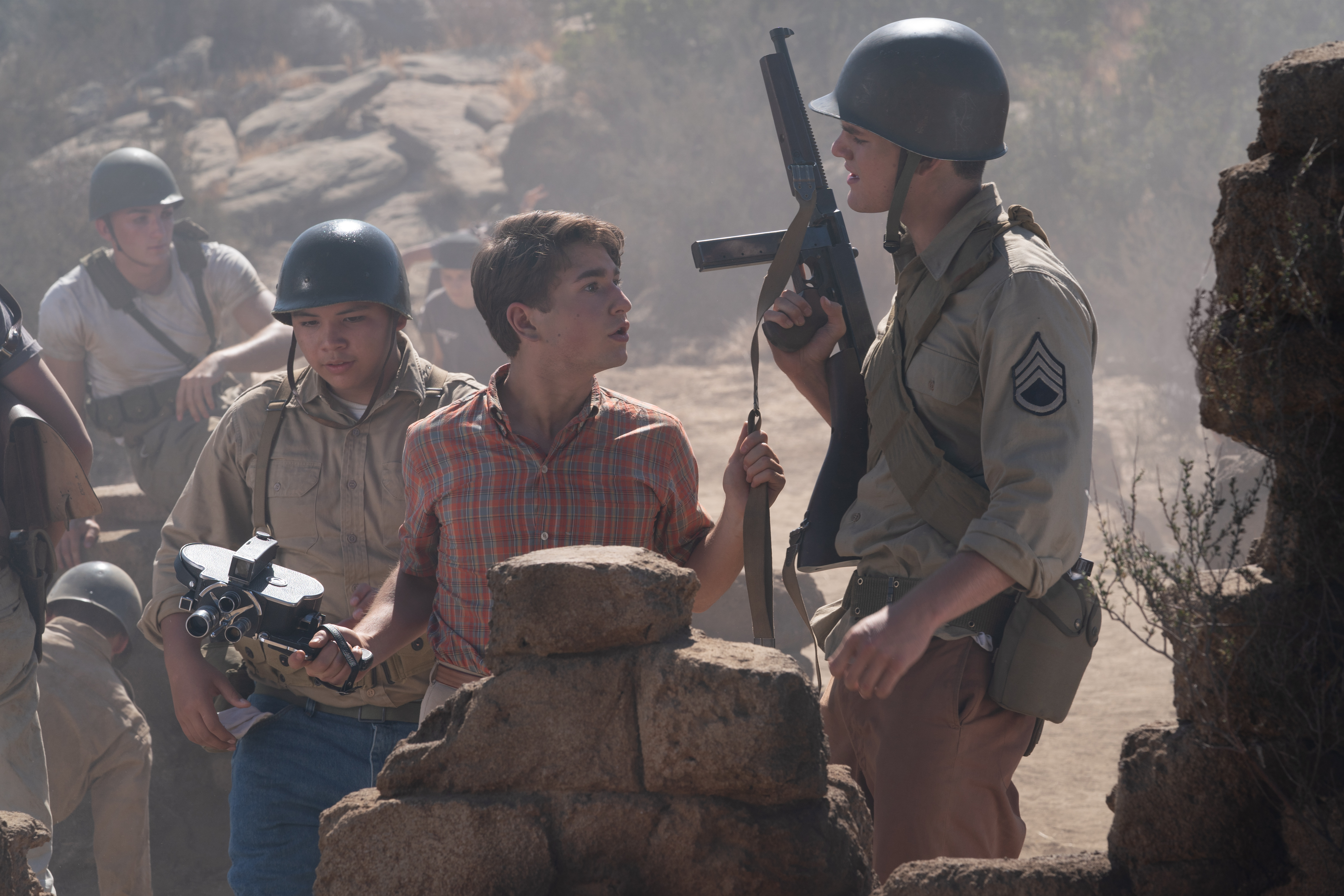 Carter, whose collaboration with Spielberg began with “Jurassic Park,” has always been reflective about his craft. He likes to be in the moment to world build from the inside out, but then pull back and analyze. Reconstructing the world of the Fabelman family created a new challenge. This was a road trip, stripped of metaphor, built around what Carter calls “the Spielberg code” of recurring themes and motifs from his movies. Therefore, as the family moves westward, the journey becomes a classic migration story. But, for Sammy, it becomes a journey to the promised land of Hollywood.

Although “The Fabelmans” was forced to shoot in California due to the pandemic, it ironically worked to the filmmakers’ benefit, precipitating a nostalgic aesthetic for Spielberg and Carter that was reminiscent of their respective production experiences in the ’70s, where the state stood in for anywhere. The most important sets were the three Fabelman houses in Haddon Township, New Jersey; Phoenix, Arizona; and Los Gatos, California. These were the chambers of Sammy’s psychological development, based on Spielberg’s memories and photo reference material from his family archives. The recreations captured the emotional spirit of the spaces: For the New Jersey house, it was Sammy’s interior life and fledgling love of cinema; in Phoenix, a ranch style channels Burt’s hopeful ambitions. The Los Gatos house is older, gloomy, and spare, devoid of any childhood memories.

Bridges, who’s become a master at mid-to-late 20th century costume design, not only studied Spielberg’s family photo albums but also watched his old home movies. He then took artistic license in conveying the Fabelman family’s westward progression and changing mood in a color palette that evolved from cool tones to brighter ones to, finally, dirty pastels. For Mitzi, Bridges appropriated Leah’s signature red lipstick, Peter Pan collars, and overalls, but altered the look to complement Williams’ silhouette and individual vibe.

For Burt’s engineer vibe, the costume designer utilized Arnold’s propensity for plaids, but worked with actor Dano’s very different physique. For Sammy, Bridges had fun with what he gleaned from the photo albums. This included oversized jeans, two-toned shoes, suspenders, and Hawaiian shirts.

Kamiński, who’s been Spielberg’s go-to cinematographer for 30 years (beginning with “Schindler’s List”), has gotten to know the director and his family very well during that time. Now he gets to demonstrate that familiarity.

Shot on Kodak stock — in 35mm as well as 16mm and Super 8 for Sammy’s movies — “The Fabelmans” became Spielberg’s ultimate expression of film’s analog glory, which Kamiński captured by getting warmer and brighter as the Fabelmans journey from the ’50s to the ’60s. The coming-of-age drama offered moments of emotional intimacy and thrilling spectacle (including a tornado courtesy of ILM), and plenty of Easter eggs (topped off by the signature stream of light coming through the windows).

The biggest treat, though, was shooting Sammy’s engaging amateur movies, starting with his toy train crashes as a little kid in New Jersey and progressing to his impressive teenage efforts in Arizona (including a recreation of Spielberg’s acclaimed World War II actioner, “Escape to Nowhere”). Making Sammy’s movies involved a close collaboration between director, cinematographer, and prop master Andrew Siegel. Spielberg not only got to relive his youth — shooting an 8mm camera himself  — but also improve upon the handmade quality of his early work. This was the best way to demonstrate Sammy’s prodigious talent as a director. Also, to get usable film, Spielberg and Kamiński shot with both 8mm and 16mm cameras, with footage from the former used as a visual reference to guide the work of degrading footage from the latter to resemble 8mm quality film.

Kahn began cutting with Spielberg on “Close Encounters of the Third Kind,” and also has had gotten to know the director and his family. “The Fabelmans” additionally marks the editor’s ninth collaboration with Broshar, starting with “The Adventures of Tintin” in 2011. As was the case in other crafts, Kahn and Broshar’s “Fabelmans” experience was like making multiple movies in once — Spielberg’s and Sammy’s. Editorially, the family’s cross-country trek highlights the emotional highs and lows of Sammy and Mitzi.

At the same time, the sub-theme involving Sammy’s filmmaking exploits offers its own emotional arc. For example, while shooting and cutting movies from a family camping trip, Sammy treads into “Blow-Up” and “The Conversation” territory by discovering a family secret that leads to disillusionment. However, Sammy also realizes how to weaponize moviemaking to his own advantage. This later occurs when shooting a beach-party movie during senior class ditch day in Malibu.

“The Fabelmans” may be telling a fictionalized version of Spielberg’s story, but it also finds a chance to pay homage to Kahn’s career: Watch for the nod to “Hogan’s Heroes,” the World War II sitcom on which the editor cut his teeth.

The sound team of supervising editors Rydstrom and Brian Chumney (“West Side Story”) and Oscar-winning re-recording mixer Andy Nelson (“Les Misérables,” “Saving Private Ryan”) got to excel at multiple soundscapes for the Fabelmans’ migration and Sammy’s various film projects. The highlight of the family story is the sound of the tornado, in which Mitzi actually speeds toward it in the car with Sammy and his three sisters (Reggie, Natalie and Lisa). Notably, the sound team also got to recreate young Spielberg’s “Escape to Nowhere” and his Western short, “The Last Gun” (called “Gunsmog” in “The Fabelmans”) while delivering what we expect from Atmos or IMAX sound mixes.

Williams has scored 28 out of 35 Spielberg’s films since the director’s 1974 theatrical debut, “The Sugarland Express.” But “The Fabelmans” marks the last of their nearly 50-year collaboration, with Williams’ impending retirement following “Indiana Jones 5.” He too had the privilege of knowing Spielberg’s parents and particularly admired Leah’s musical talent. This served him well in several ways: At the center of the story is Sammy’s strong connection to Mitzi, and Williams was inspired to compose one of his most beautiful piano-based themes around that bond. He also got to musically convey “the Spielberg code” throughout the film and during Sammy’s film projects using the piano in a variety of ways (including ragtime).

Meanwhile, the piano pieces for Mitzi were personally selected by Spielberg and recorded for the soundtrack by Joanne Pearce Martin, principal pianist of the Los Angeles Philharmonic. The pieces, of course, were among Leah’s favorites that she played on her piano. These include Friedrich Kuhlau’s Allegro burlesco from Sonatina in A Minor, Muzio Clementi’s Spiritoso from Sonatina in C Major, Joseph Haydn’s Allegro con brio from Sonata No. 48 in C Major, and Johann Sebastian Bach’s Adagio from Concerto in D Minor. The last of those pieces figures prominently when Sammy cuts his camping trip movies together and makes his shocking discovery.