Home » TV & Movies » 'The Office': This Stunt Got Push Back From Fans for Being Unrealistic

'The Office': This Stunt Got Push Back From Fans for Being Unrealistic 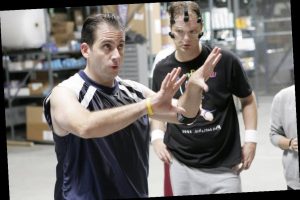 The great thing about The Office is that it captured the absurd parts of work culture for a lot of people. But there were times fans called out the show and Michael Scott (Steve Carell) for being unrealistic. One of those times was when the actors pulled off a big stunt.

Dwight and Michael drove into a lake on ‘The Office’

“Dunder Mifflin Infinity” showed Ryan (B.J. Novak) returning to Scranton after his promotion. He announced that there will be changes to revitalize the company. That meant using newer technology and everyone was given a Blackberry.

But not everyone was happy about this. Creed (Creed Bratton) dyed his hair black in order to look younger. Michael accused Ryan of ageism and brought in Dunder Mifflin’s co-founder to speak to the employees. He then took things even farther.

Michael left to win back former customers by giving them gift baskets with Dwight (Rainn Wilson). While they’re out, Michael drove into a lake because of the GPS even though Dwight points out there is obviously no more road.

Fans thought it was too unrealistic

The stunt looked like it took a lot of effort. But some fans weren’t impressed and thought it was too unrealistic despite Michael’s past bad decisions. Jenna Fischer, who played Pam Beesly, and Angela Kinsey, who played Angela Martin, talked about this on the Office Ladies podcast.

“When I was emailing with Steve about this scene, Angela, he reminded we got a lot of push back after this episode aired because of this moment,” Fischer said. “He said people kind of thought it was a little over the top, that it was unrealistic that someone would follow their GPS into a lake.”

Writer Jennifer Celotta is the one who came up with this idea after looking in a minivan’s manual that had a warning against driving your car into a body of water even if your GPS told you to. She figured one person who would do this is Michael Scott.

Celotta brought in all of the evidence that this actually happens in the writers’ room to pitch the idea. Wilson also talked about doing this stunt in the podcast episode.

They didn’t really drive a car into a lake

There were a few tricks to pulling off the stunt. The car wasn’t driven into a lake. Instead, it was put on a system that pulled it into the lake and stopped it at a point. The car also didn’t have an engine or gas tank. A camera man sat in the back seat with a gift basket to capture the stunt.

Wilson said the water wasn’t clean so he was most worried about getting something like an eye infection. But the actor said it was “super fun” to shoot. Unfortunately, not everyone was happy with the scene.