Naturally, the biggest hurdle for any TV show based around food and drink is that taste is the sense that travels least efficiently through a screen. Even when presented with an exotic locale, you can imagine the sun on your skin or the bustle of a busy marketplace or the scent of an ocean breeze. But when presented with someone — particularly an expert in their field — who says that they’ve never tasted anything like what they’ve just ingested, you’re getting close to the realm of fantasy.

So it’s series like “The Wine Show” that best work around the problem by making food its main dish (or, in this case, the beverage paired with it), but surrounding it with plenty of other courses. Some of those arrive in the form of its presenters: Season 3, now available to stream on Acorn and Sundance Now after premiering in the U.K. last fall, adds Dominic West to the existing trio of James Purefoy, Matthew Goode, and Matthew Rhys. Under the guidance of wine experts Joe Fattorini and Amelia Singer, their slow refinement of their respective palates is on display as the show hops between continents with an energy as vibrant as some of the vintages they’re tasting on screen.

This year, the quartet of actors are flung to different parts of the world, with Rhys holding down his own unofficial New York restaurant tour and Purefoy joining West in private tasting sessions with Fattorini and sampling Portuguese wine regions with Goode. That latter set of segments, with the pair on a set of “missions” to retrieve bottles from each section of the country, is the best kind of self-aware middle-ground between a reality show competition and a highly staged field piece. Yes, there is some coordination to where these men are headed (it’s not like they plop them in a sedan with a GPS and have them do all their own recon), but there’s a charm and spontaneity in how they go about it. They’re comfortable in what they don’t know and thrilled by what they manage to pick up. 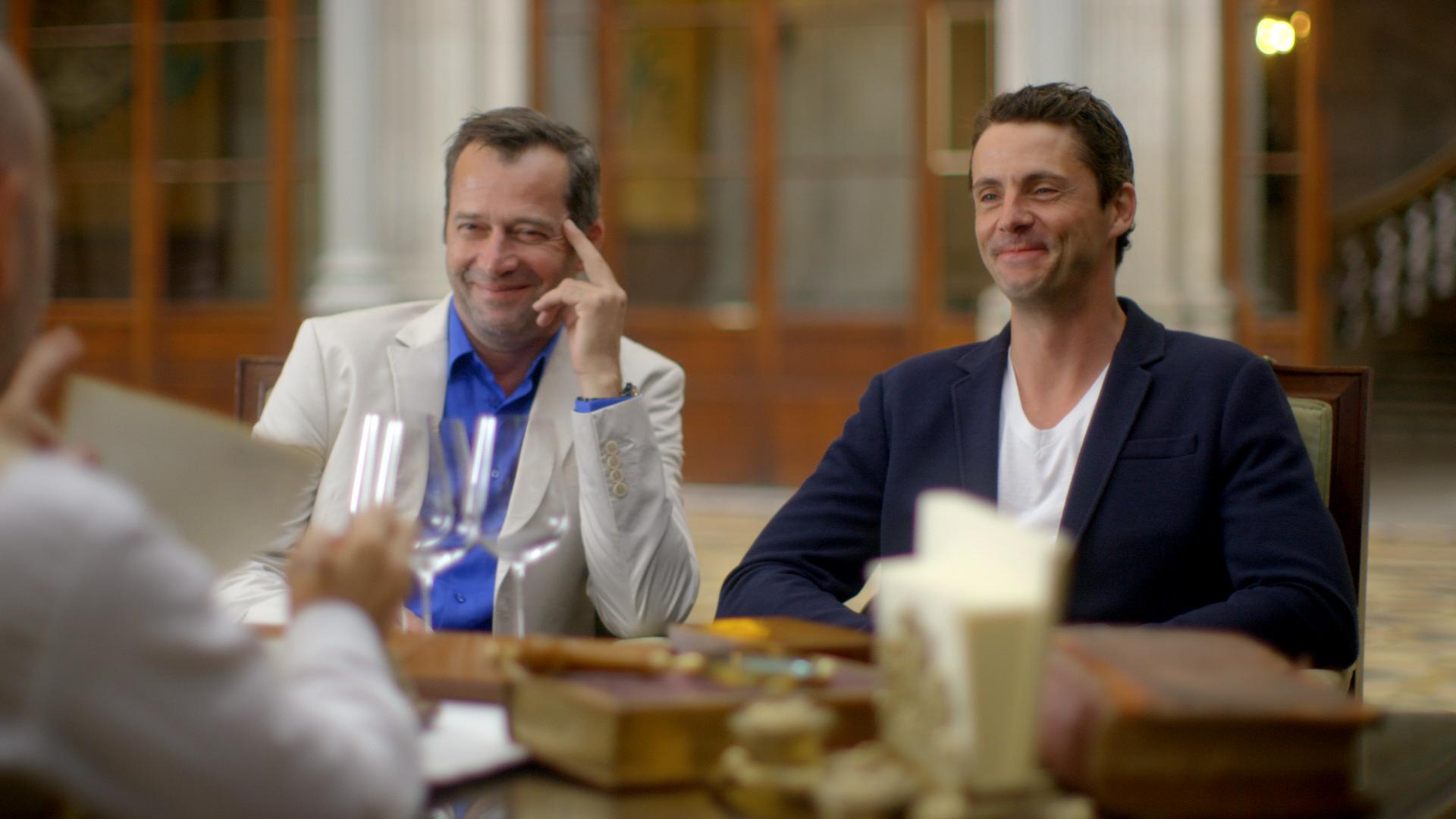 A playful attitude runs through each of the show’s separate features. “The Wine Show” is at its best building an atmosphere when it gives its participants free rein. There’s structure in their various discoveries, but the best colo(u)r comes from the more spontaneous moments in between. (Goode, holding an ax-like instrument designed for harvesting cork from trees: “Normally you see that spinning into the back of someone you went to drama school with.” Purefoy, when posed a geography-related question: “I’m very good at iambic pentameter. I’m not very good at sailing ’round the world.”) When this project could easily be an elaborate exercise in snobbery, it’s far more readily a vehicle for glorious self-deprecation.

Like travel, wine appreciation isn’t the most accessible hobby. “The Wine Show” doesn’t shy away from the high dollar figures for some of these bottles, but doesn’t fetishize the exclusivity. It’s presented in a more matter-of-fact way and, if anything, there’s a respect among the drinkers for the higher-end offerings, even when the overall feeling of those tastings is loose and casual. For those who have watched each season, there’s also a gradual sense of honing a craft, of being able to pick out different subtleties you might expect a classically trained performer to be attuned to. Is it a hardship to hang out at a sun-drenched villa and indulge in some of the finest wine the world has to offer? No. But in a deceptive, unmistakably entertaining way, these fresh new encounters represent a kind of all-around effort that doesn’t happen by accident.

As a de facto glue holding some of these disparate parts together, Fattorini doesn’t present himself as an all-knowing oenological savant. There’s often a joking tutor/pupil dynamic with the actors, but when he and Singer venture to countries around the world to offer a window into their respective wine traditions, they often allow themselves to be humbled by what they find. The show isn’t completely immune to the inherent viewpoint of The Outsider that many of these food/travel hybrids take on. Yet, to counterbalance that, there’s a concerted effort to let the experts from those respective parts of the world have a chance to tell their own stories and to present themselves to anyone curious enough to sample their wares, wherever in the world those future drinkers may be. 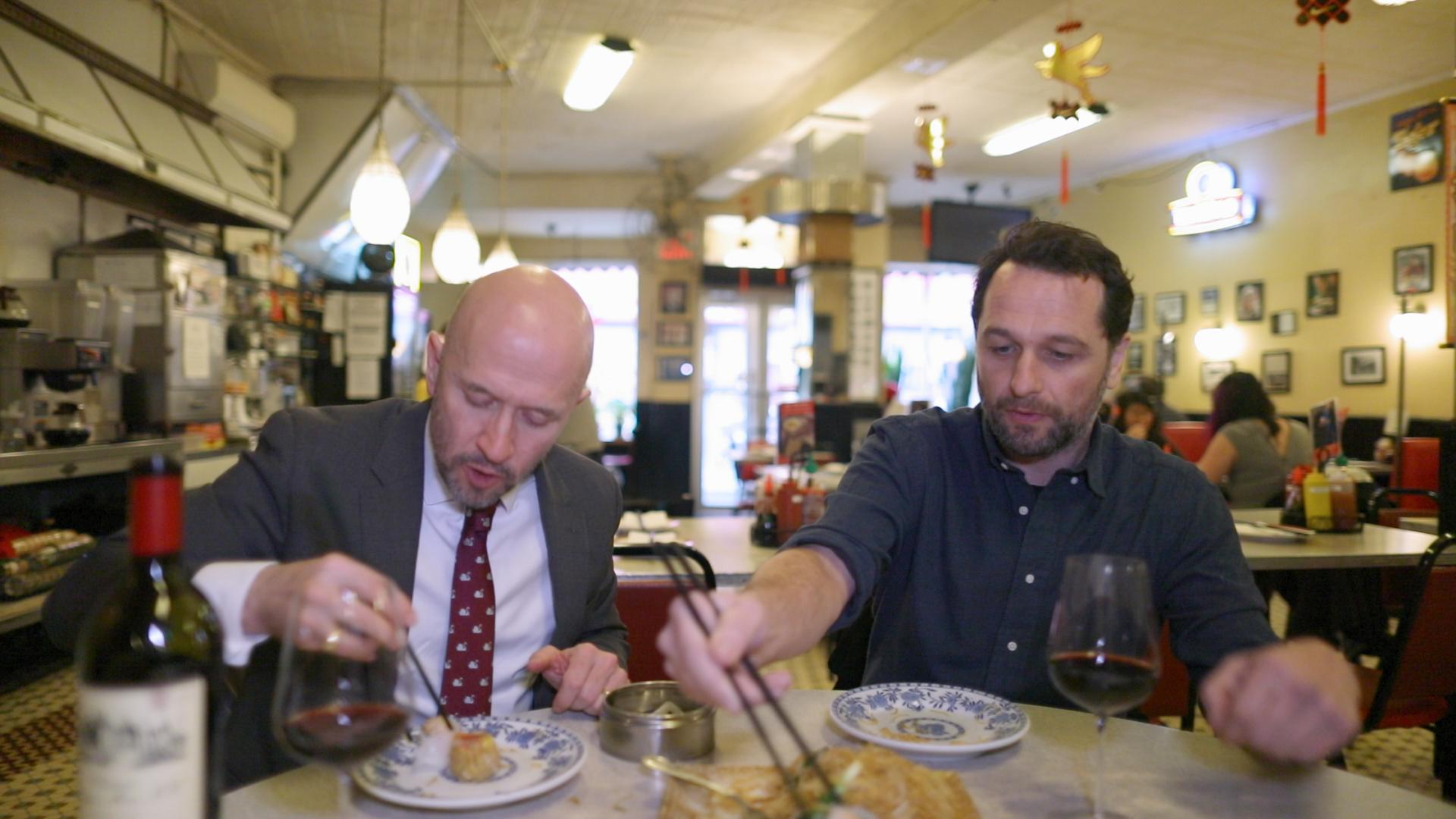 There’s an air of gratitude amidst the playfulness that really makes “The Wine Show” work. Essentially, the gents are on vacation, getting the chance to metaphorically soak up knowledge of each successive region and varietal. The perpetual smiles plastered on all of their faces is either the mark of a half-dozen people having a blast getting to do what they love or a sign that the main cast is populated by exceptionally good actors. It applies to those off-stage too: You can almost hear a satisfied smirk in plenty of West’s voiceovers.

“The Wine Show” also acknowledges it’s impossible to be comprehensive, especially in a culinary area that’s seen lineages span millennia in any number of untold places around the world. So instead of treating this pastime like a book to be memorized, “The Wine Show” becomes a study in metaphor. Fattorini’s answer to pairing wine with a spicy curry isn’t to try to soften the blow but to balance the kick. It’s part of a larger back-and-forth that becomes about more than just wine, about how to adapt and approach new experiences. On an international level, the ebbs and flows of global taste prove that it’s impossible for one country or a single principality to truly corner a market (and that uniqueness or primacy does not always translate to superiority). Though the Purefoy and Goode “challenges” come down to who can best represent a particular style or tradition of wine, it’s almost always framed as a close call. In wine, the show seems to say, there really aren’t winners or losers. Just a plethora of players in a game that’s been going on as long as people have had words to describe it.

“The Wine Show” Season 3 is now available to stream via Sundance Now and Acorn.