Home » TV & Movies » ‘To All the Boys: Always and Forever’ Review: Netflix Concludes Hit YA Series with a Stuffed Sequel

‘To All the Boys: Always and Forever’ Review: Netflix Concludes Hit YA Series with a Stuffed Sequel

“To All the Boys I’ve Loved Before” and its sequel were nothing if not dependable. When we last left star-crossed teens Lara Jean Song Covey (Lana Condor) and Peter Kavinsky (Noah Centineo), the couple at the heart of Netflix’s most charming YA series had overcome (yet another) near-fatal relationship misunderstanding. For a romance built on miscommunications and cute complications, “To All the Boys: P.S. I Still Love You” offered up more of the sweetness of its predecessor, with a gentle nudge into grown-up concerns. Similar issues frame the final entry in the film trilogy based on Jenny Han’s popular books, which is also touted as the conclusion to the series. “To the All the Boys: Always and Forever” marks the longest entry in the franchise, and it certainly feels it — especially through a middle both overstuffed and inert — but its otherwise keen energy often keeps it afloat.

So, yes, again, Lara Jean and Peter are facing down some bumps on their road through love, but Condor and Centineo cook up enough appeal that, three films in, audiences can’t help but be invested in them. While “P.S. I Still Love You” ended with the pair reunited after a love triangle nearly waylaid them, the deeper issues at play in the 2020 entry of the series come home to more fully roost in “Always and Forever.” Above all else: Who are Lara Jean and Peter without, well, “Lara Jean and Peter”? “Always and Forever” hinges on that premise, with more grown-up concerns at play, and starts with the pair apart. Sort of.

Opening during a family trip to Seoul, “Always and Forever” sets into early motion the big themes of the film: Lara Jean’s unstoppable maturation, the sense that perhaps she and Peter will not always see eye to eye, and the loving bond with her family that will guide her through the tough stuff. Director Michael Fimognari again returns to helm this entry (he previously served as the DP on the first film, directed by Susan Johnson, and directed the previous one) and his zippy visual flair is on full display. The Instagram aesthetic of the series might not be totally rooted in the real world, but the good heart of the franchise will endure long past the social media looks that inspired it.

Halfway across the world with her family, Lara Jean suddenly finds herself opened up to all kinds of experiences, and while missing Peter is never far from her mind, she can’t deny that she’s having a blast. Back home in the States, “Always and Forever” holds tight to that idea, even as Katie Lovejoy’s script struggles to always keep it front and center in the midst of an often convoluted storyline. In short: Lara Jean and Peter have been planning to go to Stanford together, but when Lara Jean doesn’t get in, it throws that plan — and perhaps their entire romance, not one “built” for long distance, as little sister Kitty (Anna Cathcart) observes — into total disarray.

But that’s not even the half of it, as “Always and Forever” soon burns through the Stanford problem and introduces yet another higher education-centric wrinkle (what if, Lara Jean starts to wonder, she wants to actually go to NYU?). It just keeps moving from there, first by diving deeper into Peter’s own family issues, then adding in some Covey clan drama, reinvestigating old wounds inflicted by Peter’s ex-girlfriend Gen (Emilija Baranac), trying to make its audience care about sassy BFF Chris’ (Madeleine Arthur) dating woes, and giving Kitty her own boyfriend. For good measure, there’s also a class trip and a prom. With two films already behind it, “Always and Forever” is still, somehow, the first film in the franchise that seems made for the episodic treatment. There’s just too much here, even if we can guess where it will all end up.

That overstuffed nature does, however, lend itself to some benefits, from a closer look at the Covey family bond (that Lara Jean’s family is just as important and interesting as her romantic life has always been one of the greatest elements of the franchise) to a real desire to patch up fractured bonds elsewhere (Lara Jean and Gen’s fraught history isn’t exactly thrilling material, but the generosity with which the films approach it is the sort of thing in short supply in a genre that so often loves to pit women against each other). These are warm, fun, and funny films that never let their rom-com wackiness get in the way of hard-won affection. 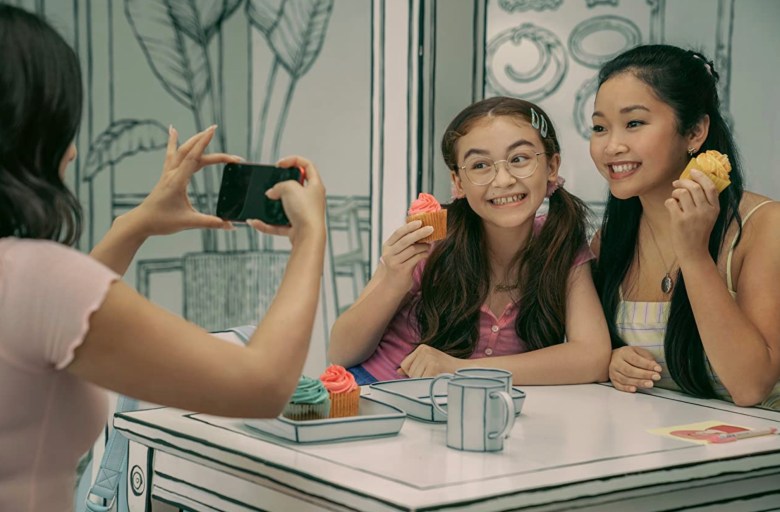 “To All the Boys: Always and Forever”

Things grow slacker and a touch sillier by its middle act, which both does away with big problems and introduces entire new ones in their place. Still, Condor remains such a genuinely adorable leading lady and Lara Jean such a special character that fans will undoubtedly embrace the messy ride. Many of the issues facing Lara Jean and Peter are familiar to any high school rom-com, but this franchise has never shied away from its genre bonafides before — this is, after all, a series as comfortable throwing out references to “Say Anything” to “Annie Hall” and every classic in between — and it embraces the cliches with honesty and wit.

Who are Lara Jean and Peter? And what does the future hold for them, together, or perhaps apart? While Fimognari’s film definitively answers both of those questions — turns out, when you have six hours to develop a relationship and love story on screen, you can get deep — it still provides the space to wonder what’s next for them as they take their tentative step into the wider world. It’s about as satisfying as any teen-centric romance could ever hope to be.

“To All the Boys: Always and Forever” starts streaming on Netflix on Friday, February 12.