The problem with reality TV shows like “90 Day Fiance” or “Say Yes to the Dress” is that the season (or one-off episode) ends as soon as you get attached to a character. “My 600-lb Life” is not immune from this problem. For those who haven’t watched, the TLC show follows Dr. Nowzaradan on his quest to save morbidly obese people from certain death. By the time Dr. Nowzaradan intervenes, the patients featured on the show are often so ill that they are barely able to move.

To get their lives back on track, the patients must adhere to the doctor’s strict diet and the lifestyle changes he suggests. The stakes of the show come from the patients’ struggle to make the necessary dietary and physical adaptations to their life, and their frequent clashes with Dr. Nowzaradan and their families.

One particularly memorable patient, who found the doctor’s advice very hard to follow (and was not very nice about it), was Joyce Del Viscovo. Joyce appeared on the 8th season of the show and said many memorable things like “shut up and give me the food.” Additionally, her 759-lb. starting weight made her one the heaviest patients to appear on the series, per Cinemaholic. Like everyone else, Joyce’s time on the show has come and gone, but where is she now?

Let’s figure it out. 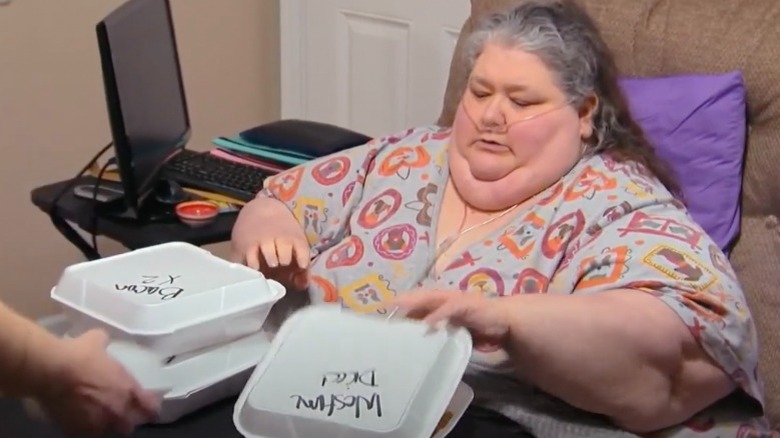 Joyce Del Viscovo’s decision to seek help from Dr. Nowzaradan and appear on “My 600-lb Life” came after she was forced to shut down her home daycare due to her obesity, preventing her from adequately running her business. Joyce was especially memorable to viewers because of her combative style of communication with Dr. Nowzaradan. Typically Dr. Nowzaradan wants his patients to lose around 50 pounds a month, something Joyce resented and struggled to do (via Heavy.com). She dropped out of the program after just a year. So, where is she now?

To make a long story short, we aren’t entirely sure. What we do know is that Joyce refused to stick to the weight loss program provided by Dr. Nowzaradan. We also know that she was having a hard time accepting responsibility for her medical condition as she was prone to blame her family for not intervening sooner. The good news? She was down 150 pounds when she left the program, per In Touch.

Unsurprisingly, Joyce hasn’t spoken out publicly since she appeared on “My 600-lb Life.” Wherever she is, we hope that she found a weight loss program that worked for her, even if it isn’t Dr. Nowzaradan’s.

Del, from, Joyce, My, Viscovo, What
World News