Singapore: Australian mining billionaire Andrew Forrest will invest $740 million in Ukraine’s private sector to kick-start its post-war economy, marking the first tranche of a $US100 billion global fund that has been described as Ukraine’s “Marshall Plan”.

The fund, which has been negotiated between Forrest, Kyiv, Washington, Canberra and London for nine months, will be launched on Thursday. It will be led by BlackRock, one of the world’s largest asset managers. The $740 million contribution will come from Andrew and Nicola Forrest’s family investment company, the Tattarang Group. 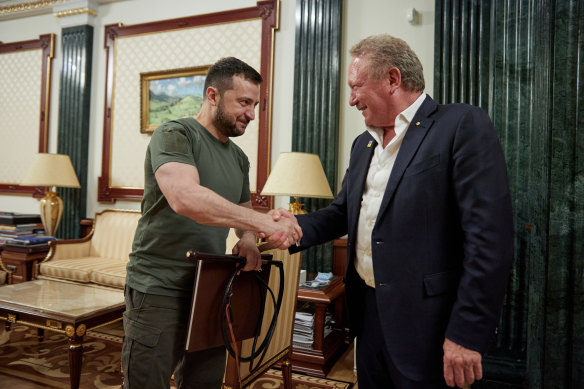 “I don’t want to wait for the last bullet to be fired. I want people to know now that Ukraine will enter into a golden era. It will be the highest growth economy in Europe without any doubt,” Forrest said.

Ukraine was battered by Russian missiles on Tuesday and Wednesday, including strikes on 10 regions including Kyiv, Lviv and Rivne, that knocked out power infrastructure, blew up apartment buildings and caused widespread blackouts and deaths. The war has taken at least 38,000 lives, displaced 14 million people and cost $520 billion as it grinds into its ninth month.

On Monday, NATO Secretary-General Jens Stoltenberg said despite Ukraine taking back the strategically important city of Kherson, “we should not make the mistake of underestimating Russia”.

“[Moscow] retains significant capabilities, as well as a large number of troops,” he said.

Ukrainian President Volodymyr Zelensky said he and Forrest would not replace “communist-era rubbish Russian infrastructure” if Ukraine wins the war.

“Instead, we will leapfrog to the latest technology. We will take advantage of the fact that what the Russians have destroyed can readily be replaced with the latest, most modern green and digital infrastructure.”

Forrest first raised the idea with OECD Secretary-General Mathias Cormann in Paris in March after an International Energy Agency meeting.

“I said: ‘I’ve got something really burning in my heart, I feel we’ve got to put a massive investment fund together to signal to the people of Ukraine and to the world that at the cessation of hostilities or the expulsion of Russian forces from the lands of Ukraine that they can invest straight away’,” he told The Sydney Morning Herald and The Age.

“He said, ‘oh my God, you’re talking about the Marshall Plan’. I said, yeah, but the Marshall Plan started late, four years after [World War II] ended when there was devastation. I said, ‘No, we need a Marshall Plan immediately after the last shot is fired’. And he said, ‘Well, you better start the work now’. So we did.”

In between trips from Kyiv to army bases in Donbas in June, Zelensky privately endorsed the Fortescue chairman’s push for investment. Forrest had just donated $1.8 million to organising a ship filled 23,000 tonnes of wheat grain to travel from Ukraine to the Horn of Africa.

The meetings in Paris and Kyiv in the northern spring and summer triggered a round of talks between Forrest and world leaders, including US President Joe Biden, former British prime minister Boris Johnson, Australian Prime Minister Anthony Albanese and BlackRock chief executive Larry Fink. On November 11, Ukraine’s Economy Ministry signed a Memorandum of Understanding with BlackRock to drive private capital for the recovery of Ukraine’s economy. Zelensky and Forrest will announce Forrest’s investment at Bloomberg’s New Economy Forum in Singapore on Thursday.

Between the 1950s and 1970s the post-war economies in Europe and Asia made a fortune for investors as capital flowed after the end of conflict.

“Neither before nor since have world production and trade expanded so rapidly and for so long without experiencing a major recession,” said University of Oxford economist Tamas Vonyo.

Albanese said he welcomed the initiative by Andrew and Nicola Forrest “to promote investment to ensure Ukraine can build back stronger with a more secure economic future”.