Home » World News » As Trump melted into the background at Davos, one big new climate idea stood out

As Trump melted into the background at Davos, one big new climate idea stood out London: Something strange happened this week: for the first time in a long time, Donald Trump wasn't the main attraction at a gathering of world leaders. The circus had lost its ringmaster.

It wasn't from lack of trying. The US President blew into the World Economic Forum at Davos and quickly sprayed environmental activists like Greta Thunberg as "prophets of doom" and made the outlandish claim that America was enjoying an economic boom "likes of which the world has never seen". He threw a cluster of attention-seeking bombs but the spotlight just wouldn't stick. 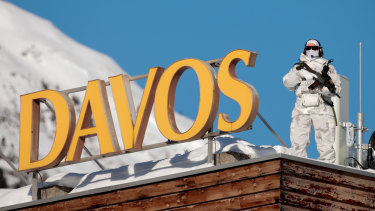 Davos is the usual mixture of snowy heights and high security.Credit:Bloomberg

But the gathering has its benefits in an era of nationalism and amid increasing recognition that the climate change crisis can only be solved by financial markets and a coordinated international political effort.

About one fifth of the formal sessions at Davos were directly related to the intersection between climate change and the economy. Heavy hitters like International Monetary Fund Managing Director Kristalina Georgieva, European Central Bank President Christine Lagarde and German Chancellor Angela Merkel all enthusiastically addressed the elephant in the room.

Business leaders also showed they've now got the message about climate change but, like many political leaders, struggled to outline concrete steps by which they will substantially reduce emissions.

By contrast, two people did lay some actual substance on the table.

Prince Charles used his first speech at Davos for three decades to essentially outline a new economic model that rewrites traditional investment mandates and risk assessments to put nature at the heart of business decisions. The future king even challenged governments to drop "perverse" subsidies for fossil fuels and endorsed carbon pricing regimes – a message that would have gone down like a lead balloon in the ministerial corridors of Parliament House in Canberra.

A couple of hours before that address, European Commission President Ursula von der Leyen also spoke of a proposed scheme that has received a staggering lack of attention given its potentially huge ramifications for emissions reduction policy. Expect to hear a lot more about this big idea over the coming months.

Von der Leyen's 'carbon border adjustment mechanism' would essentially slap a tax on certain carbon-intensive goods imported from countries that are not doing their bit to lower emissions under the Paris climate accord. China would be an obvious initial target.

The 'carbon border adjustment mechanism' would essentially slap a tax on carbon-intensive goods imported from countries that are not doing their bit.

Its first phase would likely apply to industries like steel, cement and aluminium but the scheme could be expanded to the mining and resources sector. Australia's dominant resources market is Asia but it still exported about $4 billion worth of coal to the EU in 2018. 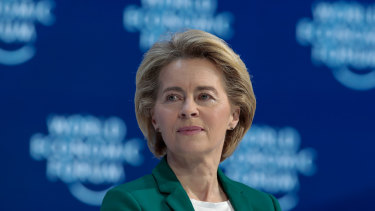 The whole idea is to protect European businesses from goods produced in countries without a carbon price, therefore encouraging overseas producers to lower their emissions and avoid any financial import penalties. It could also have the effect of preventing European firms from moving operations offshore as the bloc's climate change policies get more ambitious.

"There is no point in only reducing greenhouse gas emissions at home if we increase the import of CO2 from abroad," von der Leyen said. "It is not only a climate issue; it is also an issue of fairness. It is a matter of fairness towards our businesses and our workers."

The policy will be extraordinarily difficult to design because it will need the agreement of all 27 EU member countries. It would have to be crafted in a way that doesn't breach WTO rules or raise the ire of a deeply protectionist White House.

The scheme's development could also seriously embolden Europe's push for Australia to adopt tougher climate change targets in a planned free trade deal with the EU, despite the Morrison government's assertion that it is on track to "meet and beat" its Paris commitments.

This sleeper in climate policy is about to roar to life and what happens in Davos suddenly matters a great deal.

as, backg, into, melted, the, Trump
World News