London: The Australian government has told the UN high commissioner that blocking an Australian man’s wish to return home to support his mother during her cancer treatment did not cause him “irreparable harm”.

In April, the UN issued an interim ruling ordering the Australian government to facilitate the return of two men who had launched a case to the UN Human Rights Committee, claiming that Australia’s border closures and strict caps on returning citizens were a violation of their human rights. 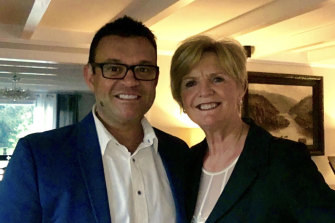 Jason George, shown here with his wife Deborah, is stranded overseas and has taken his case to the UN.

One of the pair, Jason George, an Australian working in the United States who has been fully vaccinated since March, said that one of his reasons to return home was to support his mother through cancer.

But the Australian government said the UN’s interim order should be overturned because Mr George’s circumstances did not pass the threshold of what is considered harmful enough.

“With regard to the author’s claim that he wishes to support a close family member going through treatment for cancer as well as another family member expecting a baby, and that he owns a property that requires regular attention and maintenance, Australia respectfully submits that the author has manifestly failed to substantiate the harm he would suffer if he were unable to return to Australia immediately and that such harm could be reasonably considered irreparable,” the government said.

George’s visa to work in the United States is due to expire in December 2021, meaning that he needs to return home to renew it, but the government said this was merely a “disagreeable consequence” rather than “irreparable harm”.

“Nor is there any evidence that the consequence is imminent given that his current visa remains valid for another seven months,” the government said.

“How can the loss of the right to be at her deathbed and comfort her as she dies ever be compensated for in money or called back in any way?” Robertson said.

“It is not just a ‘disagreeable consequence’: it is the permanent loss of an opportunity that the right exists to vouchsafe. To claim that it is ‘merely disagreeable’ is callous and inhumane.”

The government argued in its submission that it had organised repatriation flights from the United States for Australians in George’s situation but that the applicant had never registered with DFAT, which prioritises vulnerable Australians for return.

It noted that many of its repatriation flights, including from the United States, had not been fully booked out.

“By requesting that the Australian government ‘ensure’ the ‘prompt return’ of this individual author specifically, the committee is prejudicing the government’s policy objective of prioritising the return of more vulnerable Australians,” the government said.

Australian consular officials have not helped George get home. The second man who brought the petition, Alexander Marshall, is quarantining in Australia after being bumped off multiple flights for months. He was registered with DFAT but received no assistance from the government to get home and borrowed money from friends to fund the ticket.

The UN petition is being supported by a grassroots organisation of stranded Australians called Free and Open Australia.

Spokeswoman Deb Tellis said the government’s recent threat to fine and jail any citizen who tried to return home directly from India made a mockery of its claim that it was looking after stranded Australians.

“The government’s announcement to halve the caps again, for the foreseeable future, due to their own failures to safely manage hotel quarantine for returning citizens and permanent residents aligns their values perfectly with their attempts to have the UN case overturned,” she said.

The UN tribunal is expected to take several months to adjudicate the case.