This is the bizarre moment two giant baubles bounced down London’s Tottenham Court Road after being swept by high winds.

A video posted on social media – believed to have been taken in the early hours of Tuesday morning – shows the baubles rolling down the street in the capital’s centre.

The enormous baubles caused chaos amongst traffic with one appearing to blow into a moving car as the Met Office announced the arrival of Storm Claudio, set to bring gales of up to 70mph in parts of the country.

They are reportedly part of an art installation by artist Tom Shannon which was due to remain on display in St Giles’ Square until Friday.

Musician Kai Campos, one half of electronic band Mount Kimbie, wrote in an Instagram post: ‘Heartbroken to report that the extreme winds in London last night took down Tom’s beautiful ‘Four World Set’.

‘Seeing it completed on Sunday night was one of the most exciting things I’ve been involved with. The fact that it was so out in the open and public was one of the best parts of the work and when seeing the joy and intrigue it brought to everyone who walked through the square.

‘It felt like it had a life of it’s own and one that was just getting started. I’m absolutely gutted that more people won’t get to see it this week.’ 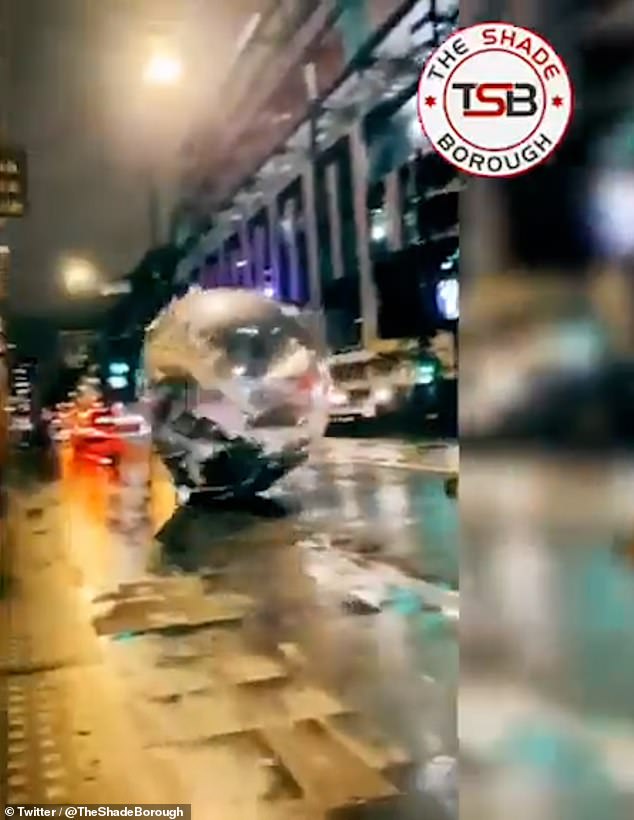 Two massive baubles were seen rolling down the street in Tottenham Court Road, in the centre of London 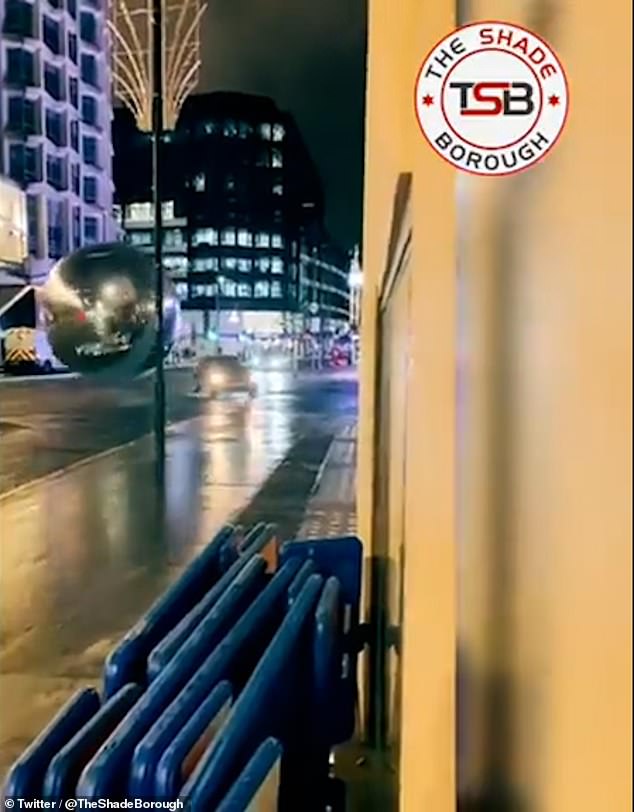 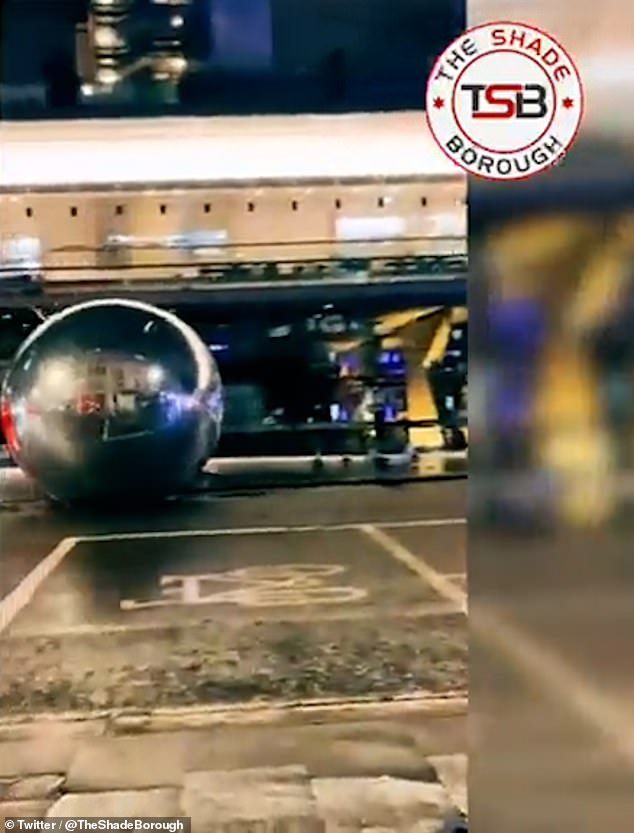 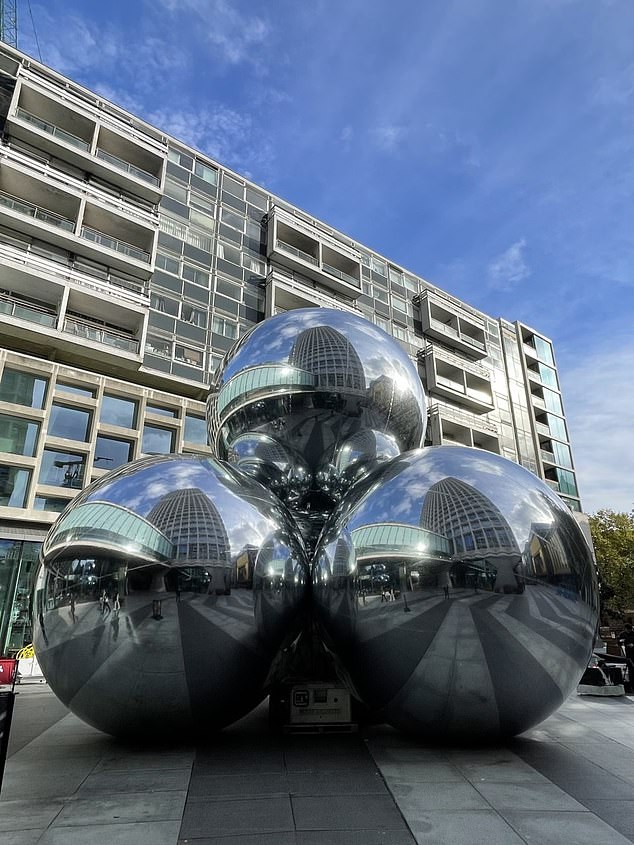 The art installation by Tom Shannon which was meant to be on display from Monday 31 October until Friday 4 November in St Giles Square, Tottenham Court Road

One who commented on the post wrote: ‘The first bauble shedding its wrapper on impact with the signpost is perfection.’

Another said: ‘Imagine walking down the road staring at your phone then getting cleaned out by a bauble.’ 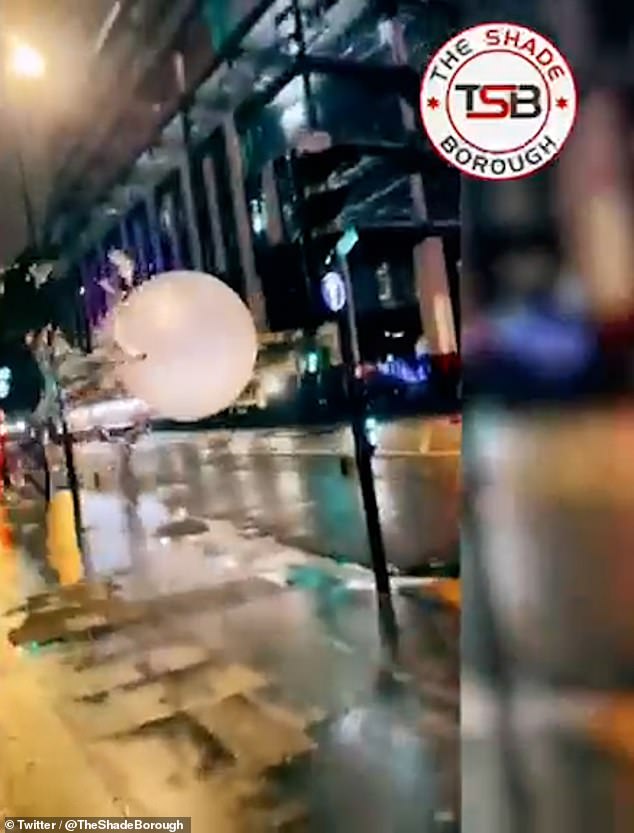 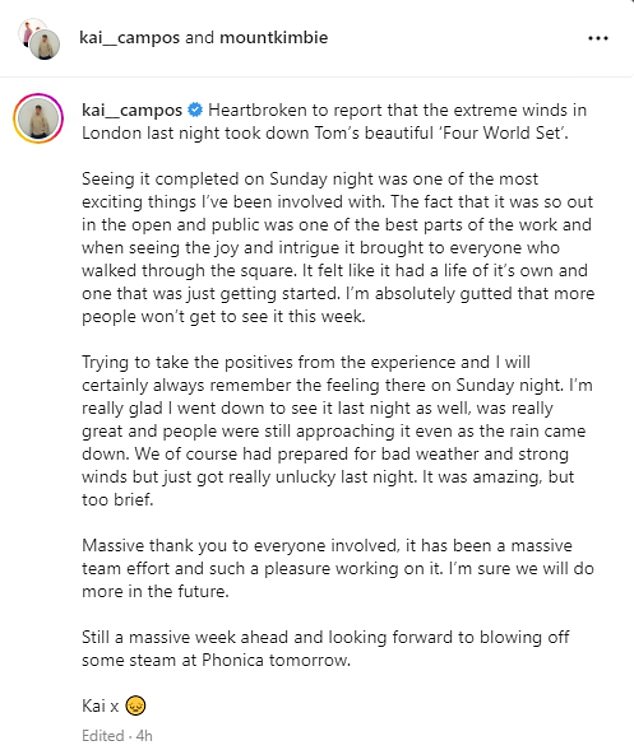 The Met Office issued a yellow weather warning in force until 8am on Tuesday, saying the weather could risk causing disruption.

Neil Armstrong, chief meteorologist, said: ‘The biggest impacts from Storm Claudio are expected in northern France, which is why is has been named as a system by Meteo-France.

‘What it means for us in the UK is for some high winds to be possible along much of the southern coast of England.

‘Some isolated and especially exposed coastal areas could see gusts in excess of 70mph, while much of the warning area will see gusts of between 50 and 60mph.’

Conditions are unlikely to improve by midweek as low pressure moving in from the west is forecast to bring wet and windy weather.

The Met Office said winds are likely to be strongest along Irish Sea coastal areas, including western Wales, north west England and south west Scotland, as well as the east coast of Northern Ireland.

It has issued a yellow weather warning for wind on Wednesday.