Brazil star Neymar could be cleared of rape accusation within days

Neymar could be cleared of the rape accusation levied against him within days, MailOnline can reveal.

His accuser Brazilian model Najila Trindade has been told by her lawyer that she faces seeing her case against the £200 million footballer collapse unless she provides more evidence.

She also faces losing the second lawyer to represent her after he said he could not carry on if his professional ‘trust’ in her was compromised.

Her attorney Danileo Garcia de Andrade said he still believed Ms Trindade had a case, but he would step aside if there was a lack of evidence. 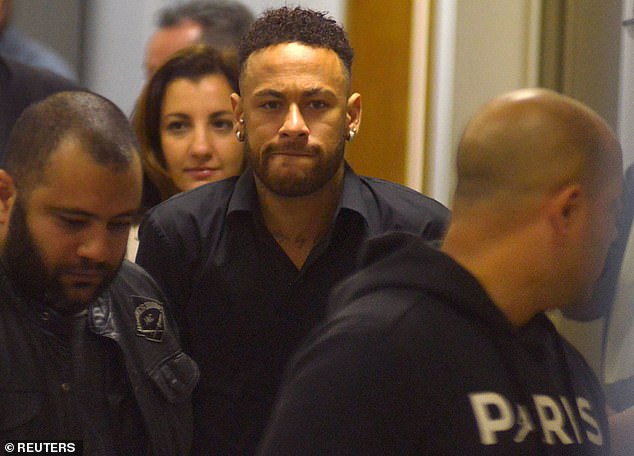 Brazilian soccer player Neymar leaves the police station after testifying in Rio de Janeiro, Brazil June 6. He could be cleared of the rape accusation within days after his model accuser was told she needed more evidence 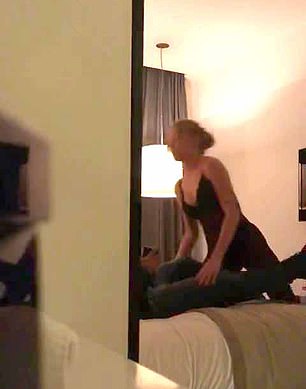 A video emerged, filmed by Ms Trindade (left) during her second meeting with Neymar, that showed her hitting him (right) as he lay on the hotel bed in what she said was an attempt to get him to repeat the aggression of the first encounter

He said he had given her a deadline to produce the video and photographs she claimed to have had which would help prove her allegations of rape against the Brazilian superstar who was bought for £200 million by Paris St Germain.

If the evidence was not forthcoming, he said, he would drop the case next week.

Ms Trindade, who says she was attacked by Neymar, 26, in a Paris hotel room last month, told police her tablet containing a seven-minute video, messages and photos she alleged incriminated the footballer, was stolen in a burglary at her apartment.

But police said they found no major signs of a break in and only Ms Trindade’s fingerprints and those of her maid and friends around the flat.

Mr de Andrade told Brazil’s UOL Esporte: ‘If the police investigation of the supposed break in where she lives shows there was no break-in, I am leaving the case.’

He added: ‘The attorney-client relationship is based always on trust. If there is no trust, then there is no reason to stay on’ 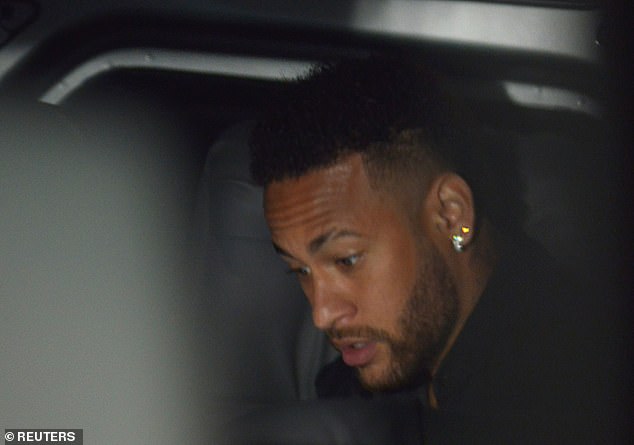 Brazilian soccer player Neymar leaves the police station after testifying in Rio de Janeiro, Brazil, June 6. His accuser has claimed that the seven-minute video of the rape was stolen from her apartment although police said, upon inspection, that they found no evidence of a break-in

Neymar has strongly denied the rape allegation and said he has been ‘set up,’

He is still set to be interviewed by police in Sao Paulo when he flies in from Rio de Janeiro early this week.

Although he is injured the Brazil team will be in Sao Paulo where Ms Trindade lives for a Copa America match against Bolivia.

Sources said police will have to drop their investigation without evidence, but would be weary of being seen allowing a multi-millionaire super star footballer, the most famous sportsman in the country, to walk free without being interviewed.

‘There is still a woman here who has been crying, unwell and saying she has been raped. It has to be thoroughly investigated if the police have something to go on.’

Neymar has been interviewed in Rio about publishing private messages between him and Ms Trindade, but that probe is also likely to be dropped now more messages between them have been leaked by her side and published on the internet.

Meanwhile, MailOnline has received a copy of the full police statement given by Ms Trindade, 26, during her first interview. 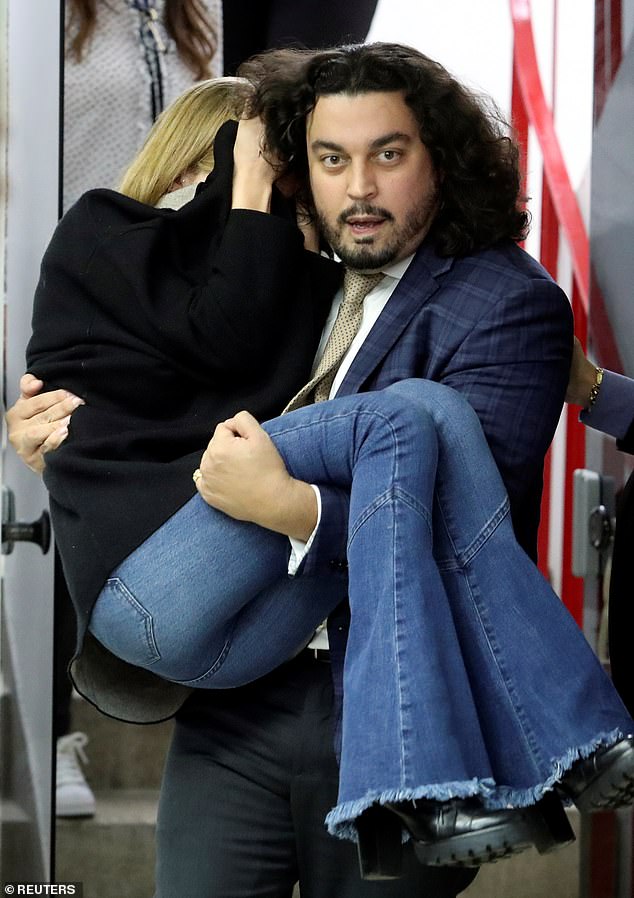 In it the model reveals an assistant to the £200 million soccer star called ‘Gallo’ acted as a go-between to lure the model to Paris for a liaison with the Brazilian sporting hero.

She admitted to wanting to have sex with him when she agreed to meet him in France but said he became aggressive and raped her.

Ms Trindade also claims the Paris St Germain striker was ‘seemingly intoxicated’ when he went to her hotel on the first of two nights.

The police statement, written in Portuguese, states: ‘The victim testified at this unit of the Women’s Protection Police Station that she met Neymar through the Instagram social network and that they started exchanging messages.

‘Neymar’s assistant “Gallo” then got in touch with her on May 12th and booked a flight and a hotel for her in Paris.

‘She left for Paris on 14th May, arrived on 15th May and stayed at the Hotel Sofitel Paris Arc de Triomphe. 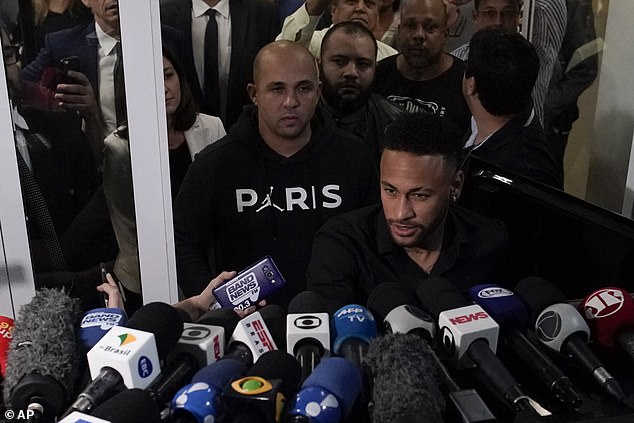 ‘The victim states that at around 8pm of the same day Neymar went to her hotel, seemingly intoxicated.

‘They began chatting and cuddling, but at a certain point he became aggressive, and through violence had sex with the victim without her consent.

‘The victim states that she left Paris for Brazil on May 17th. She affirms that she was fearful of filing a complaint in a foreign country preferring to do so at this precinct instead.’

She has spent the weekend holed up in an 11th floor apartment of a Sao Paulo tower block after giving further evidence to police on Friday.

In her second interview she told police a tablet which allegedly contained key evidence of her complaint had been stolen in a burglary.

She had already publicly revealed a minute of her clashing with Neymar the day after the alleged attack and said she had film which would help substantiate her claim that she was raped.

MailOnline had learned that she did not tell her lawyer Danilo Garcia de Andrade about the theft until they were inside Sao Paulo’s police womens’ protection unit on Friday.

She was later carried out by her lawyer after she fell and banged her inside the police unit.

Police also had to halt their questioning when she had a ‘fit of hysterical crying’ as she claimed Neymar raped her last month without a condom.

Neymar has released a video denying the allegations and revealed messages between the two.

The model broke her anonymity to repeat the claims on Brazilian TV. 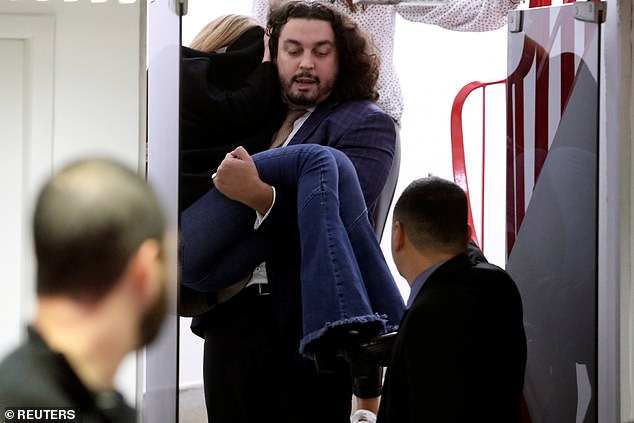 Neymar’s accuser, Najila Trindade Mendes de Souza, is pictured being carried out by her lawyer after testifying to police 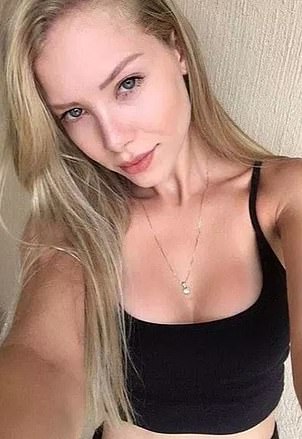 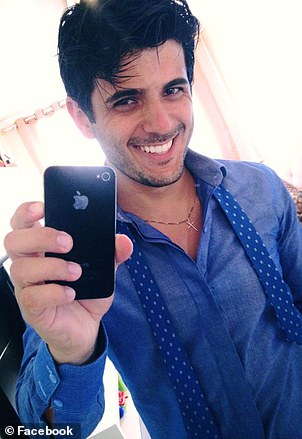 The one minute video filmed by her and released to the media, was shot during her second meeting with Neymar.

It showed her hitting him as he lay on the hotel bed in what she said was an attempt to get him to repeat the aggression of the first encounter.

The one-minute five second clip of the full seven-minute video was published earlier this week, showing Najila lashing out at the footballer over the Police hit ‘Every Breath You Take’ playing in the background.

It also showed Neymar reacting by putting his right foot up to her face in an apparent attempt to ward her off.

MailOnline also disclosed that Trindade once stabbed her ex-husband during a fight.

Estivens Alves during a fight at their Sao Paulo home in 2014.

Mr Alves, a former analyst at the Santander bank, was rushed to hospital after the attack which happened during an argument while she was sat on the sofa eating an apple.

Ms Trindade, who has a six-year-old son with her former husband, claimed she was defending herself from his aggression.

The report reads: ‘The complainant reports she was in the living room, sitting down, eating an apple with a knife.

‘He came towards her and grabbed her by the arms, which is when he was hit with her knife, causing him an injury to his chest.’

On seeing her husband was wounded, Ms Trindade called his brother to take him to hospital.

Her former husband this week claimed he and Ms Trinidade had a ‘respectful relationship’ and didn’t mention the police incidents.

‘What happened between me and her, hasn’t got anything to do with what happened in France,’ he said.

He also said that their six-year-old son ‘idolises’ Neymar.

He said: ‘Neymar is his idol. The problem is that today, my son is associated with a person, who is his mother, who is suing Neymar.

‘The child has nothing to do with Neymar’s problems. My son is being mocked on social networks and he is being judged.’

He added: ‘When she returned from her trip to Paris, she didn’t tell me anything. She was just quieter than before.

‘She only told me that something had happened and I should be prepared because of my son. I found out everything on the internet a few days later,’ he added.

Neymar denies the allegations and has instructed his lawyers that he has been set up by Trindade.

His dad Neymar Santos hit back by telling Brazilian station Record TV after they broadcast the footage: ‘I don’t think I have to defend my son at all. The images speak for themselves and it’s clear this is a video that is forced.’

‘The video is only going to show that Neymar was assaulted. She provokes an aggression so that he responds, but he realises that everything that was happening was a set-up.’

He added: ‘When my son enters the room, everything is already been filmed.

‘It would be good for the investigation and for us that the whole video emerges.

‘That’s what the police are trying to do, find all the images that she has.’

Neymar’s mum has urged her son to focus on his football in an emotional open letter backing him over rape allegations.

The deeply-religious mum-of-two, showing she felt confident Neymar would be cleared of any wrongdoing, wrote on Instagram: ‘Son, now everything is finally being clarified and the truth of God is coming to the fore, it’s time to learn with all this and return to his first love Jesus Christ.

‘He is the only one who really knows his heart, confide in him.

‘Focus solely on what you most love in life which is playing football.

‘This is what is going to give you back the happiness that’s been missing in the last few days.

‘As Christians that we are, forgive that girl. Your sister and I, as women, can assure you that she does not represent us.

‘I love you lots and I will continue praying for you every day of my life. God bless you. I love you.’

Neymar has been quizzed by police in Rio de Janeiro over accusations he posted pictures and messages from his alleged victim on social media, without her permission.

He is due to be questioned in Sao Paulo early next week about the rape allegation, which he strongly rejects.