Washington: Donald Trump remains a frontrunner for the Republican Party’s 2024 presidential nomination but the former president would be weighed down by the “baggage” of the January 6 Capitol riot if he chose to run again, according to Trump’s former chief-of-staff Mick Mulvaney.

Trump is legally entitled to run for another presidential term after being acquitted of inciting the assault on the Capitol by the US Senate, but he has faced scorching criticism from conservative powerbrokers such as Mitch McConnell and Liz Cheney in recent weeks. 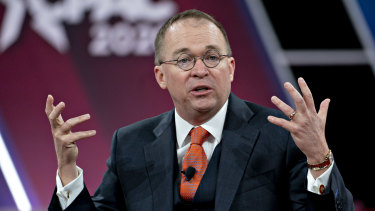 Mulvaney, who served as acting White House chief-of-staff for over a year, said that Trump would remain a leading contender for the Republican nomination if he chose to run again.

“But would he be the prohibitive favourite? I don’t think so,” Mulvaney told The Sydney Morning Herald and The Age.

“I think there are a lot of folks who would be interested in finding somebody else to carry on the torch of Make America Great Again without some of the baggage that Donald Trump would bring.

“Donald Trump would have a major challenge before him to convince people he would be electable in a general election.”

The January 6 riot at Capitol Hill has increased urgency to tackle the domestic terror threat in the US.Credit:Parler via ProPublica

Mulvaney, who resigned from his role as special envoy to Northern Ireland in response to the Capitol riot, said that Trump’s re-election prospects had been “hurt tremendously” by his actions that day.

“If there had not been the riot he would have been able to leave Washington gracefully and look back,” on what Mulvaney called “four years of tremendous successes.”

“He had a chance to really solidify his position for 2024 but he blew that on January 6. He has undermined a lot of his support in the Republican Party moving forward.”

Mulvaney said he believed there was a 50-50 chance of Trump running for president again, but he expects his former boss to keep his options open for as long as possible to maximise his influence within the party. 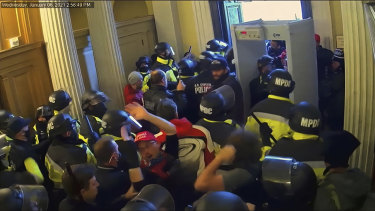 Security video of the January 6 riot shown to senators during the impeachment trial. Credit:AP

He added that other Republican presidential hopefuls would find it hard to reproduce Trump’s success, even if they try to copy his populist policies and aggressive rhetoric.

“Donald Trump is a billionaire man of the people,” Mulvaney said.

“It’s hard to be either of those things let alone both of them. Donald Trump is a unique political figure and it may be a long time before we see someone who can reproduce what he accomplished.” 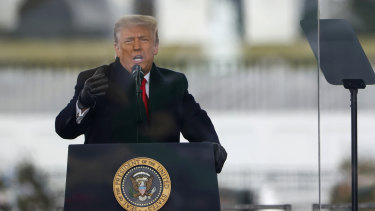 Donald Trump at the “stop the steal” rally outside the Capital building on January 6.Credit:Getty

Trump has teased the possibility of another presidential run, saying in a statement after the acquittal vote on Sunday (AEDT): “I look forward to continuing our incredible journey together to achieve American greatness for all of our people.”

A poll by Quinnipiac University released on Tuesday (AEDT) found that 75 per cent of Republicans want Trump to play a prominent role in the party while 21 per cent do not.

A new poll by Gallup found that 68 per cent of Republicans want Trump to remain the party leader, while 31 per cent want the party to have a new leader.

In an interview with Fox News over the weekend, Republican Senator Lindsey Graham said that “Trump-plus is the way back in [the midterm elections of] 2022.”

He also predicted that Republicans would nominate Lara Trump, the former president’s daughter-in-law, to run for the Senate in North Carolina in 2022.

His statements contrasted to a recent interview in which Cheney, the third-most senior Republican in the House of Representatives, said that Trump “does not have a role as a leader of our party going forward” and that “we should not be embracing the former president”.