The 36-year-old nearly died in 2016 after she was struck down with a rare form of the tropical disease while in Rio de Janeiro for the 2016 Olympics.

Webster, who says she will suffer the affects of virus for the rest of her life, became unwell after taking part in a 3,000-mile charity cycle ride to the Brazilian city.

The broadcaster, who was due to work as an official Team GB presenter, was put in a medically induced coma and doctors initially feared she would die. 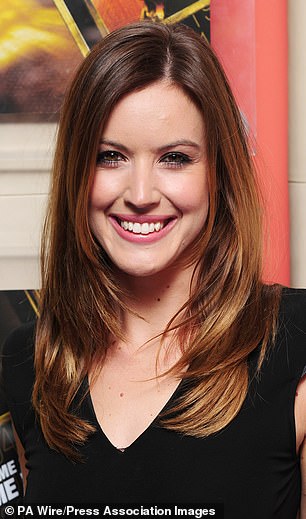 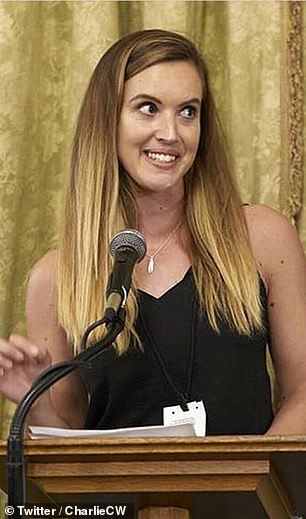 Presenter Charlie Webster (left, and right, giving a speech in Parliament yesterday, says her kidneys are permanently damaged and she still suffers flashbacks from PTSD three years after contracting Malaria. 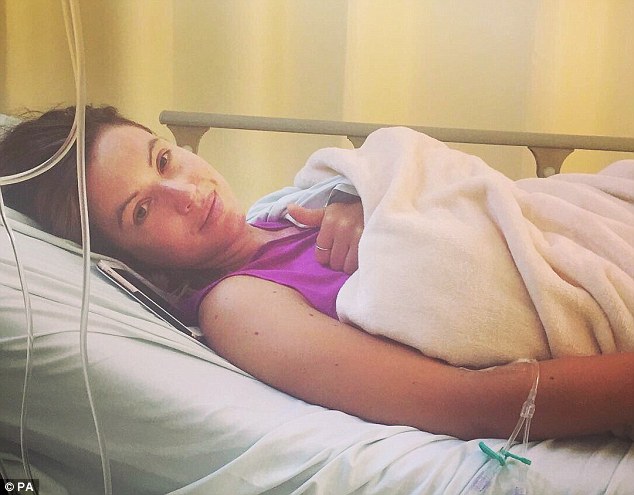 Ms Webster, pictured here recovering in hospital in 2016 after contracting Malaria, says is no longer allowed to drink alcohol because it could put her kidneys under ‘too much pressure’

She is no longer allowed to drink alcohol because it could put her kidneys under ‘too much pressure’, has to closely monitor her slat intake, and takes part in challenging sporting events to help her mental health.

Now she is calling for people to sign a petition to eradicate the disease forever and gave a speech in Parliament yesterday for Global Fund calling for more investment to fight malaria.

She said yesterday: ‘I’m still picking up a lot of little pieces about what Malaria did to me. The flashbacks and mental health, due to PTSD.

‘My kidneys that remind me I now have limitations that I didn’t have before.

‘But I had access to healthcare. That’s why I’m alive.’ 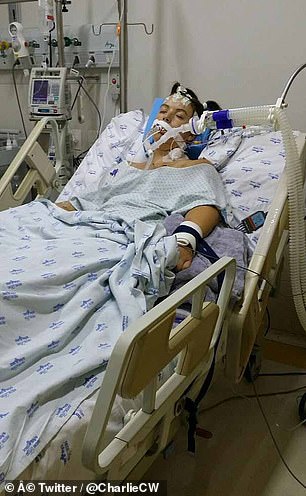 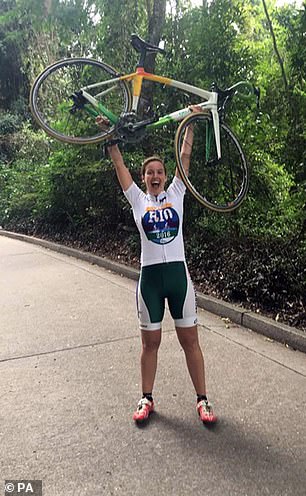 The sports host, who was due to work as an official Team GB presenter, was put in a medically induced coma (left) and doctors initially feared she would die. She had completely a 3,000 mile charity cycle from London before contracting malaria (right) 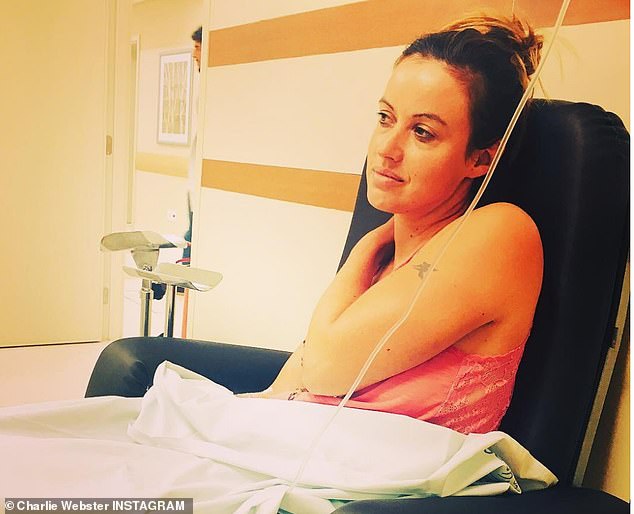 In an interview after her speech she revealed: ‘I’ve got permanent kidney problems and I have to be careful, especially when I do sporting events.

‘About a year ago I got bad results for my kidneys and my liver and I came out of the hospital and broke down in tears.

‘I was so frustrated, I was so angry, because I was really healthy before – which is one of the reasons I survived – and I was like, no, hang on. They said I wasn’t going to survive and I survived, so this is not going to debilitate me.

‘The doctors still don’t know enough about the damage caused to my kidneys, so they could last forever or they could fail down the line.

‘But I didn’t survive to sit here worrying ‘Oh no, my kidneys might fail tomorrow’.’ 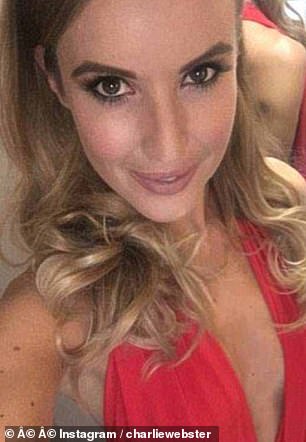 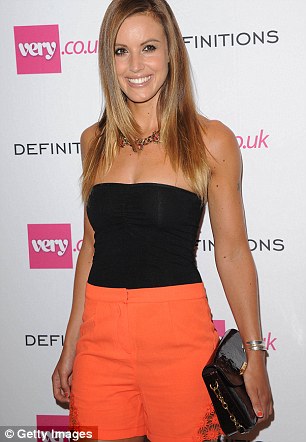 Webster (pictured) is supporting the campaign Malaria Must Die, So Millions Can Live and its new voice petition, backed by stars including Hugh Laurie, Emelie Sande and Peter Capaldi 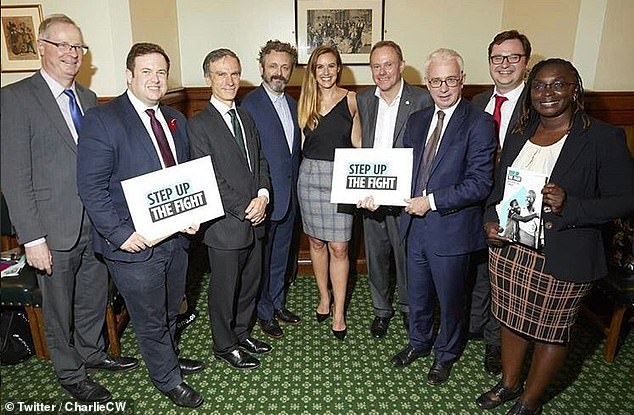 Webster said she is no longer allowed to drink alcohol because it could put her permanently-damaged kidneys under ‘too much pressure’.

‘Diet-wise, it’s mainly salt I can’t have, which is really hard because I’ve not got a sweet tooth, I’ve got a salt tooth,’ she added.

‘Whenever I have too much salt I swell up and feel really sick.’

She is also not allowed to take ibuprofen or any anti-inflammatory drugs, nor antibiotics, even if she has an infection.

The broadcaster said she wished there had been more emphasis on the impact that her near-death experience and ongoing recovery has had on her mental health. 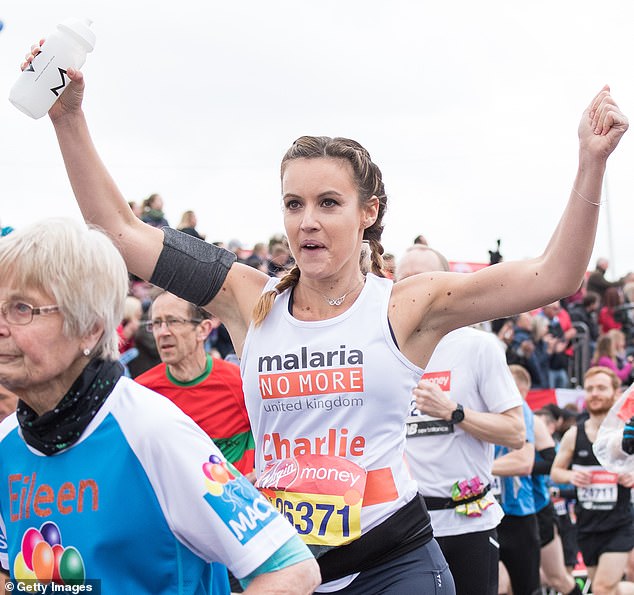 She said she signs up to challenging sporting events, including a gruelling race across the Alps last weekend and the London Marathon in April (pictured) to help her mental health

She said: ‘You’re working on the physical stuff during recovery and what I found difficult was, when I first went back into things, everybody told me I looked so well.

‘I knew they were just trying to be nice but they had no idea what was going on in my head. The torment, the stress.’

Of dealing with PTSD, she said: ‘I knew I needed help. I was getting so much physical help and I knew I needed mental health help to deal with this.’

She said she signs up to challenging sporting events, including a gruelling race across the Alps last weekend and the London Marathon in April, to help her mental health.

What is post-traumatic stress disorder (PTSD)?

People with PTSD often suffer nightmares and flashbacks to the traumatic event and can experience insomnia and an inability to concentrate.

Symptoms are often severe enough to have a serious impact on the person’s day-to-day life, and can emerge straight after the traumatic event or years later.

PTSD is thought to affect about one in every three people who have a traumatic experience, and was first documented in the First World War in soldiers with shell shock.

People who are worried they have PTSD should visit their GP, who could recommend a course of psychotherapy or anti-depressants, the NHS say.

Having experienced the effects of malaria herself, Webster said she wants people to understand that the disease is more than just a health issue, and that it is also strongly linked to gender equality problems around the world.

An ambassador for the charity Malaria No More UK, she said: ‘Malaria prevents people from going into education, from becoming decision-makers. Women and girls are more susceptible to the disease due to pregnancy.

‘If we want to have a positive impact on this world, we need to include malaria into the conversation of education and gender equality.’

She added: ‘Sometimes we’re so narrow-minded in the way we think about problems, but everything is interlinked – you don’t just get malaria and that’s that. It impacts everything.

‘Each of those deaths are people that can have a positive impact on international development, which is what we’re trying to tackle at the moment as a global community.’

Webster is supporting the campaign Malaria Must Die, So Millions Can Live and its new voice petition, backed by stars including Hugh Laurie, Emelie Sande and Peter Capaldi.

Launched by David Beckham earlier this year, the voice petition calls for people to speak up for those who need help and join the world’s first voice petition to end the disease.

The voice petition will be crafted into a sound sculpture to grab the attention of world leaders ahead of the Global Fund’s meeting in Lyon, France, in October.

The Global Fund, which provides almost 60% of all international financing for malaria worldwide, aims to raise at least 14 billion US dollars (£11 billion) to help the global fight against malaria, tuberculosis and Aids.

Add your voice to the voice petition at malariamustdie.com.