Washington: China is willing to work on a bilateral basis with low-income countries facing economic challenges due to the coronavirus pandemic and may approve delays in some debt service payments, a Chinese official told Reuters on Tuesday. 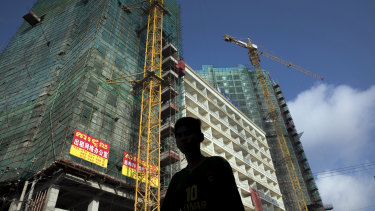 A pedestrian walks past a construction site in Sihanoukville, Cambodia as yet another Chinese-funded building goes up.Credit:Bloomberg

The official said China, a major creditor, was still considering a push by the International Monetary Fund and the World Bank for it and other official bilateral lenders to immediately suspend debt payments from the poorest countries.

"Developing countries, especially low-income countries, are facing greater challenges. We are willing to maintain communication with relevant countries through bilateral channels," said the official, who was not authorised to speak publicly.

"We agree that some countries should not be forced to make payments during the crisis."

The IMF and World Bank on March 25 called for a debt moratorium for the world's poorest countries for about a year as they battle the pandemic and mitigate the impact of sweeping shutdowns aimed at slowing its spread.

The institutions have urged the Group of 20 major economies, which include the United States and China, to endorse the call, but G20 finance officials failed to do so during their last meeting on March 31. A G20 working group is due to meet on Wednesday before the finance officials reconvene on April 15.

Debt relief has been provided before to help the world's poorest countries, but the dynamics have changed considerably.

Unlike a major IMF and World Bank debt relief program launched in 1996, when countries mainly owed money to wealthy Western countries and multilateral institutions, much of the debt is now held by China and Chinese companies.

China's government, banks and companies lent some $US143 billion ($229 billion) to Africa between 2000 and 2017, according to Johns Hopkins University.

Emerging market debt will be a top priority next week when the IMF and the World Bank hold their Spring Meetings, although all events will be online this year instead of bringing together over 10,000 people in Washington.

Global debt issuance reached record levels in March as governments raised funds to battle the pandemic, further increasing emerging market debt levels that already reached a record $US71 trillion in 2019, or a debt-to-GDP ratio of 220 per cent.

World Bank President David Malpass has estimated debt service payments this year would total some $US14 billion for the International Development Association countries that are home to a quarter of the world’s population.