A Chinese orienteering team was disqualified this week for cheating at the Military World Games being hosted on home turf, apparently using secret paths and markings in the navigation competition, organizers said.

Chinese runners initially came in first, second and fourth in the women's middle-distance competition and second in the men's.

However, organizers said the athletes — Chinese soldiers — were aided by spectators along with markings and small paths prepared for them, the International Orienteering Federation (IOF) said.

"The middle-distance competition was unfortunately overshadowed by extensive cheating by the Chinese team," the IOF said.

Officials investigated the race after protests from Russia, Switzerland, France, Poland and Austria, and the results were voided. The entire Chinese team was also banned from further races. China's appeal was rejected. 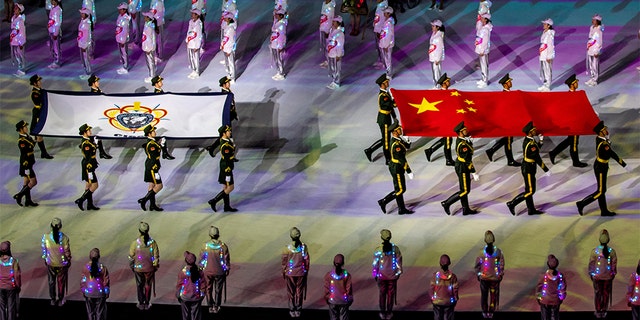 Soldiers from Chinese People’s Liberation Army (PLA) parade with a Chinese national flag and a Military World Games flag during the opening ceremony of the 7th CISM Military World Games in China, this month. The Chinese military’s orienteering team was disqualified. (Reuters)

"The IOF takes the actions of the Chinese team very seriously and is pleased to see that the IOF rules regarding the fairness of competition were enforced by the jury," the IOF said.

Orienteering combines racing and land navigation; competitors use a map and compass to get to various points in the fastest time.

The event is organized by the International Military Sports Council but the orienteering competition is governed by the rules of the IOF.

"Although the event is not an IOF event, the IOF is investigating if any further actions need to be taken to guarantee the fairness of competition at the upcoming World Cup final in Guangzhou, China Oct. 25-29," the organization said.

"If verifiable evidence of any improprieties are found, the IOF will apply any sanctions necessary to guarantee the fairness of the competitions at the World Cup," it added.

The Military World Games is held every four years and brings together military athletes from around the world. Athletes from 109 nations, including the United States, are competing in this year's games in Wuhan, China.

China built a village to host 10,000 athletes and coaches for the 10-day event. President Xi Jinping attended the opening ceremony on Oct. 18.