Coronavirus woes have forced the City of Melbourne to cancel one of its flagship New Year’s Eve shows two days before it was due to take place in Docklands.

Lord mayor Sally Capp confirmed on Wednesday evening the drone swarm would no longer form part of the city’s program to welcome the new year on Friday due to COVID-related freight and logistics challenges. 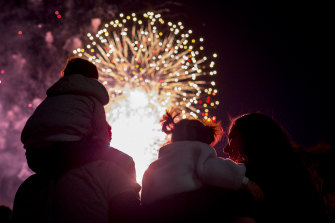 A family takes in the New Year’s Eve fireworks in Melbourne.Credit:Chris Hopkins

The council hired UK-based firm Celestial to deliver the lightning show, which was to feature more than 350 drones creating colourful displays in the sky during two seven-minute performances, across Victoria Harbour.

The event, slated to become Australia’s largest drone show, was funded through the $100 million Melbourne City Recovery Fund, a partnership between the council and the state government to inject life back into the CBD.

However, staff isolation stints and major delays shipping key equipment such as batteries to Australia meant Celestial could not carry out crucial training and test flights, leaving the council no other option but to cancel the shows this week.

“We know this decision is disappointing, particularly for our local traders who have done it so tough this year,” Ms Capp said.

“Despite the best efforts of the Celestial team, the rapidly changing environment has impacted their ability to deliver the show safely.”

Ms Capp said Celestial was working around the clock to resolve the issues and planned to deliver the shows as early as possible in the new year.

All Celestial staff members are now out of quarantine and key equipment has arrived in Australia, allowing the company to begin testing out the shows.

“It’s disappointing that COVID-19 has disrupted yet another set of plans in 2021 and we won’t have the drones swarming in Docklands this New Year’s Eve, but I’m so excited to join tens of thousands of Melburnians in the city to see the back of 2021 and celebrate the start of a new and better year.”

The brains behind Edinburgh’s 2020 New Year’s Eve drone display, Celestial has worked with local artists to design and choreograph the shows and was due to hold twice-nightly shows throughout January.

It is unclear how many of those shows will be cancelled or postponed.