Following an epic share price decline of more than 27% this week, Coinbase issued a stark warning to customers: Your crypto is at risk if the exchange goes bankrupt.

According to Coinbase’s official website, the company has more than 98 million verified users. It is the largest cryptocurrency exchange platform in the United States.

Coinbase’s CEO Brian Armstrong attempted to calm shareholders in a series of tweets one of which read: ‘Your funds are safe at Coinbase, just as they’ve always been.’

Despite Armstrong’s claims, in an SEC filing the company referred to customers as ‘unsecured creditors’ in the event that Coinbase went belly-up. 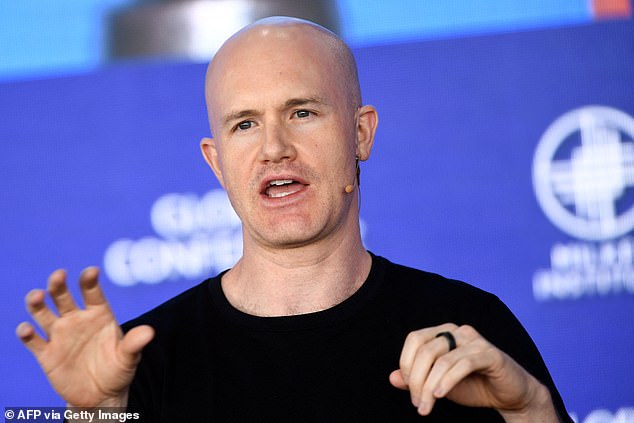 Coinbase’s CEO Brian Armstrong attempted to calm shareholders in a series of tweets one of which read: ‘Your funds are safe at Coinbase, just as they’ve always been’ 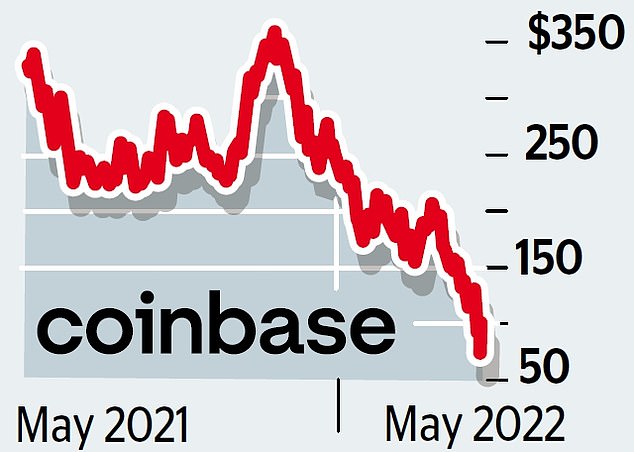 This means that customers’ crypto assets would be considered the property of Coinbase by bankruptcy administrators.

Armstrong wrote on Twitter that the company is at ‘no risk of bankruptcy’ despite the filing, which he said was made so that company would be in compliance with SEC regulations.

The new regulation is designed to protect crypto traders by giving them more in-depth knowledge about the company’s contingency plan in the event of bankruptcy. 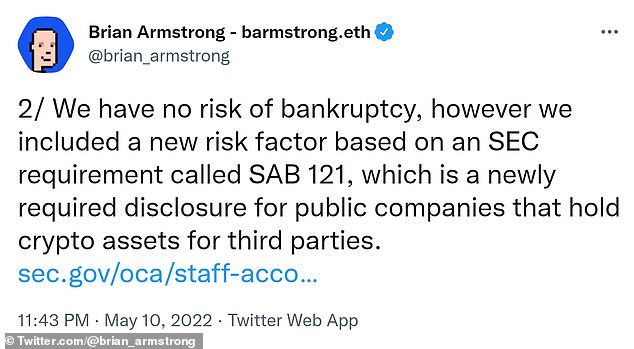 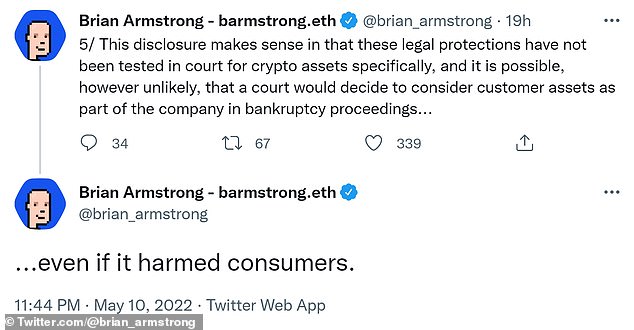 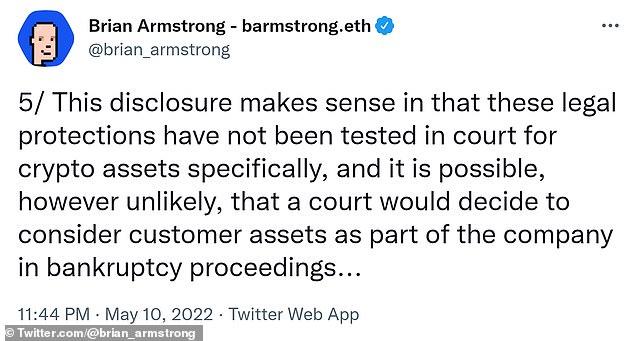 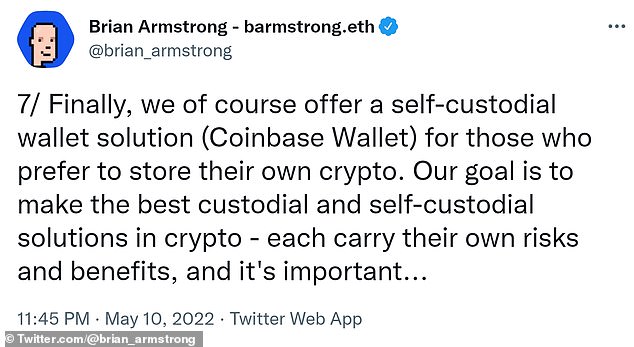 Armstrong tweeted: ‘This disclosure makes sense in that these legal protections have not been tested in court for crypto assets specifically, and it is possible, however unlikely, that a court would decide to consider customer assets as part of the company in bankruptcy proceedings even if it harmed consumers.’

In the first quarter of 2022, Coinbase posted a loss of $430 million amid a 19% drop in monthly users. The company has said that trading is likely to keep going down in the second quarter.

Another contributing factor has been the falling price of bitcoin.

Coinbase’s shares, which tend to track the health of the wider crypto sector, have lost around 85 per cent of their value since its debut on Wall Street in April last year.

In their May 2022 earnings report, the company bragged about their first Super Bowl ad which came with the slogan: ‘Less talk, more Bitcoin.’

The report says the ad reached 40 million households and generated millions of social media mentions ‘resulting in significant improvements in our brand awareness, favorability, and consideration, among our target audience.’ 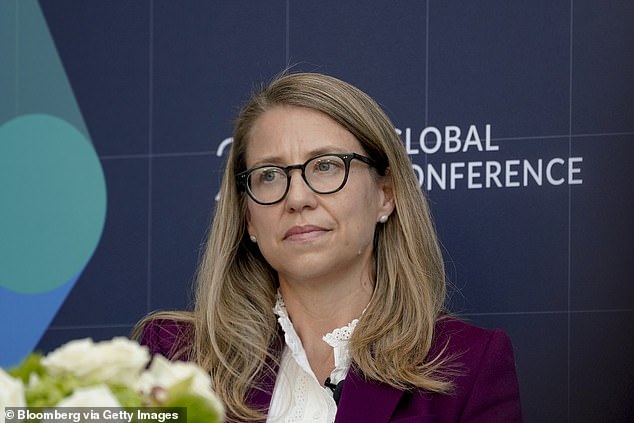 The ad cost the company $14 million and the day after Super Bowl Sunday, the company’s share price fell nearly 2%, according to Reuters.

Coinbase Chief Financial Officer Alesia Haas said on a call with analysts on May 11 that the company decided to spent money on ‘diversifying product lines’ rather than focus on profits, reports CNBC.

In January 2022, Brian Armstrong bought a five acre estate in Bel Air at a cost of $133 million.

According to Coinbase’s earnings report, the company said that they hold $256 billion in crypto and fiat money on behalf of their customers.

When a user opens a Coinbase account and buys cryptocurrency, the company holds that crypto on the application’s wallet. This ‘means the individual is giving away at least part of their control over their own funds,’ according to Fortune Magazine.

Following Russia’s invasion of Ukraine in February, Coinbase announced in a statement that they had suspended the accounts of 25,000 Russian Coinbase wallets.

The statement accused those account holders of ‘engaging in illicit activity, many of which we have identified through our own proactive investigations.’

Crypto exchanges do not have a federal protection such as the Federal Deposit Insurance Corporation that protects customers of traditional banks in the US. 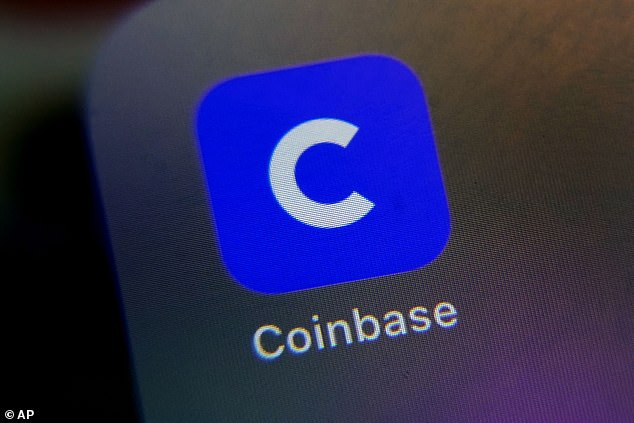 In the first quarter of 2022, Coinbase posted a loss of $430 million amid a 19% drop in monthly users. The company has said that trading is likely to keep going down in the second quarter

The money that customers deposit at traditional banks is protected to the tune of $250,000, in the event that the bank in question goes bankrupt.

There is the option of personal cryptocurrency insurance for traders.

On Twitter, Armstrong issued an apology to shareholders for not being more open about the company’s new SEC filing saying they ‘didn’t communicate proactively when the risk disclosure was added.’