‘Hey KFC, we’ve found an even bigger chicken than you’: Feathers fly as Conservative Party tweets advert of Jeremy Corbyn dressed as a CHICKEN

The Conservative Party has been slammed after it tweeted a new advert showing Labour leader Jeremy Corbyn dressed as a chicken.

The bizarre advert, which has been ridiculed online, is a reference to Boris Johnson calling Corbyn a ‘gigantic chlorinated chicken’ in the House of Commons on Wednesday, after he refused to agree to a general election on October 15.

In the tweet, the Tories described Corbyn as a ‘totally spineless chicken’ and wrote: ‘Hey @KFC_UKI, we’ve found an even bigger chicken than you.’

The chicken brand was quick to hit back and distance itself from the ad, commenting: ‘This is KFC not LBC don’t @ me.’ 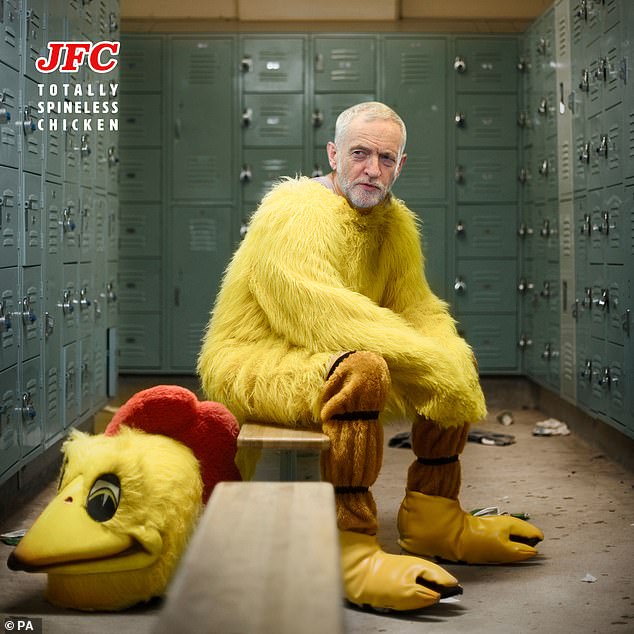 The Conservative Party tweeted this photo of Jeremy Corbyn dressed as a chicken, calling him a ‘totally spineless chicken’ 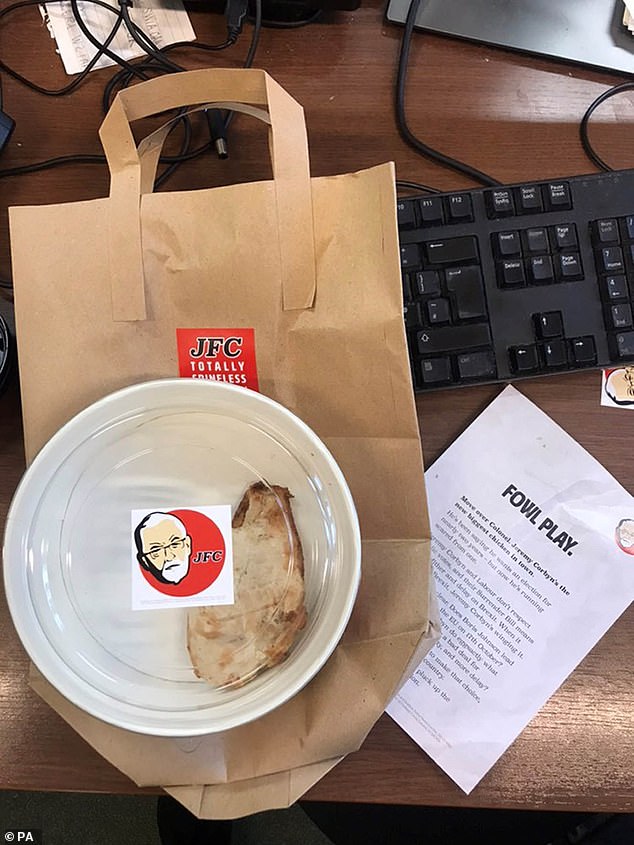 This box of chicken was also sent to some Westminster journalists, complete with a sticker of Jeremy Corbyn looking like KFC founder Colonel Sanders

KFC was quit to hit back at the ad campaign, distancing themselves from the Conservatives

Former Conservative Alistair Burt, who had the whip removed this week for defying the Government over plans to block a no-deal Brexit, was one of many to criticise the post.

‘Please stop this stuff,’ he tweeted. ‘We are better than this.’

‘Thinking about what to have for lunch,’ he tweeted sharing the image. ‘Large bucket of boneless (certainly spineless) JFC (Jeremy’s Frightened & Chicken) perhaps.’

In response, Baroness Sayeeda Warsi, who co-chaired the Conservatives between 2010-12, tweeted: ‘This James is silly playground behaviour. We are in the middle of a national crisis and this is our response. How can grown men reduce themselves to this level of silliness. What has become of this great party of ours.’

As part of the campaign, the Tories also sent boxes of chicken to journalists in Westminster.

They came with a sticker that showed Corbyn in the style of iconic KFC founder Colonel Sanders. 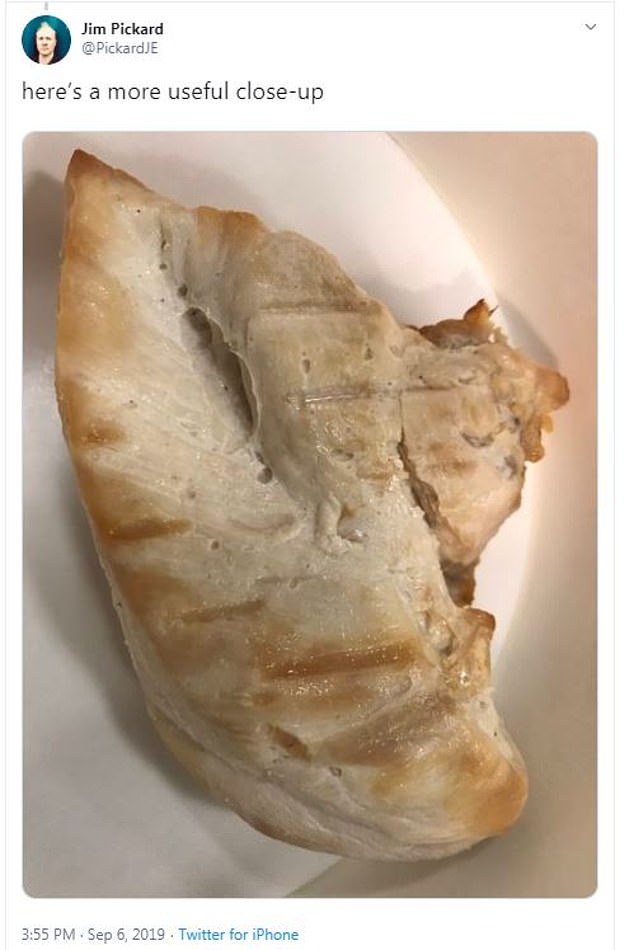 Several people including former Conservative Alistair Burt hit out against the move and said the party is ‘better than this’. Pictured is a close up of the chicken sent to some journalists 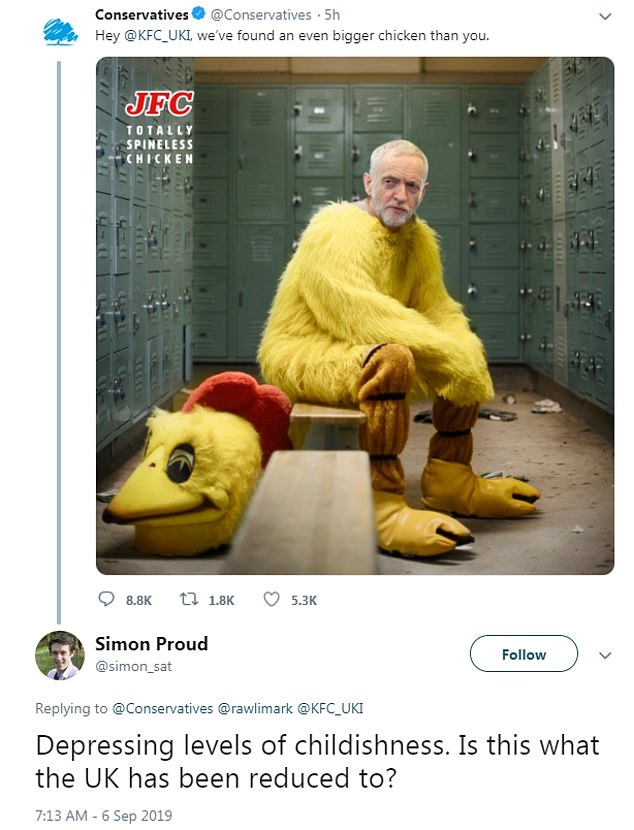 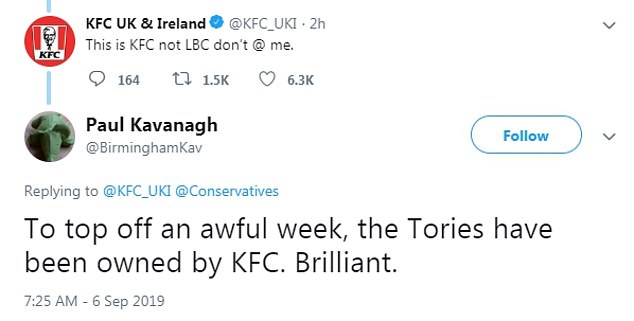 Shadow home secretary Diane Abbott said the Tories are ‘distracting from their chaotic leadership and lack of mandate with bad policies and even worse jokes’.

‘The problems facing this country are serious and a competent government would be acting not distracting,’ the Labour MP added.

The campaign was savaged on social media, with the Tories criticised for being ‘puerile’.

One person commented: ‘How very mature. Robert Peel must be turning in his grave, and many Tories since.’

Another added: ‘Oh m8. This is humiliating.’

While a third asked: ‘Wait, this came from the actual OFFICIAL conservative Twitter account? What is happening?!’

Dragon’s Den star Deborah Meaden also joined in the criticism, tweeting: ‘Dear @Conservatives please stop and take a long hard look at yourselves. This is such a bad idea on all fronts.’