Cost of servicing household debt set to reach £125BILLION in 2024

Ministers have been warned of a ‘ticking time bomb’ after official forecasts showed the cost of servicing household debt in Britain will double to £125billion in 2024.

Figures from the Office for Budget Responsibility revealed the total cost of servicing debt – including mortgages, personal loans and credit – across all UK households this year is £60billion.

But with interest rates and the price of mortgages soaring, this is set to reach £107billion next year and an eye-watering £125billion the year after.

This is the equivalent to £4,450 per UK household.

The OBR have also forecast that debt costs will take up 7.5 per cent of households’ disposable income in 2024, compared to just 3.8 per cent today.

It is even forecast that household debt servicing costs will reach £137billion in 2027, when debt costs will nudge to 7.6 per cent of households’ disposable income.

Earlier this month, the Bank of England warned that millions of households are expected to face increases in monthly mortgage repayments of more than £100 by the end of next year.

The Bank also found those with mortgages on fixed rates set to expire by the end of 2023 are facing average repayment increases of around £3,000 per year.

This was based on market interest rates at the end of November, with the Bank having since hiked its base rate to 3.5 per cent on 15 December. 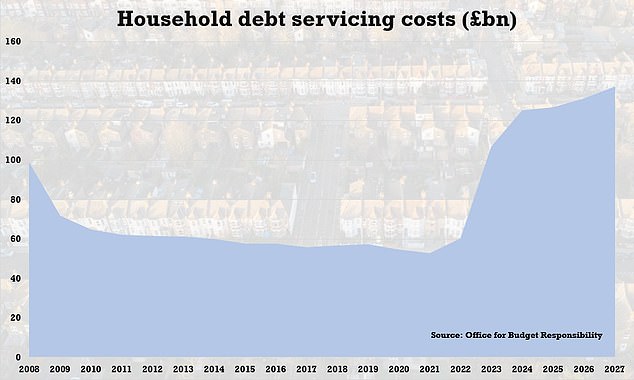 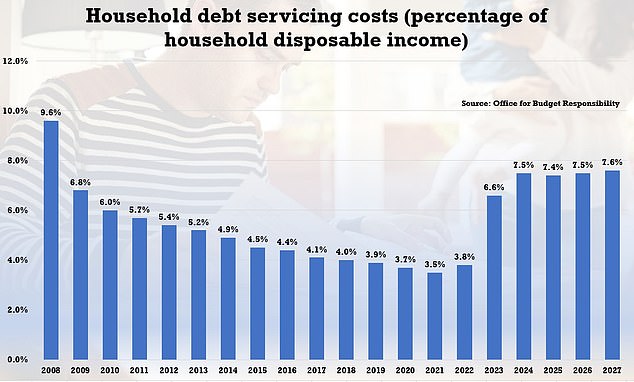 The OBR have also forecast that debt costs will take up 7.5 per cent of households’ disposable income in 2024, compared to just 3.8 per cent today 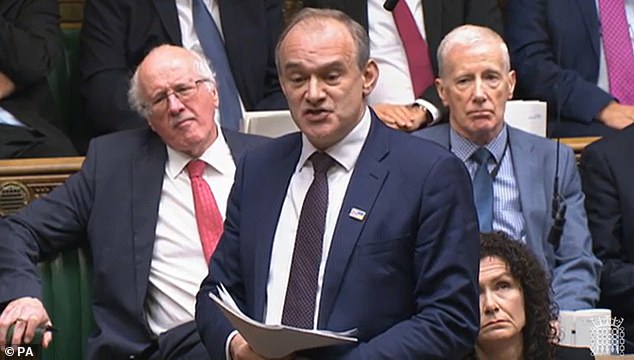 Liz Truss’s ‘disastrous’ mini-Budget was widely seen to have put a ‘Truss premium’ on the cost of mortgages in the wake of this autumn’s financial turmoil during her time as prime minister.

The Liberal Democrats are calling for urgent action from the Government to prevent people losing their homes as a result of soaring mortgage interest costs.

The party wants ministers to ban banks from repossessing people’s homes over the Christmas period.

They have also proposed a ‘Mortgage Protection Fund’ – paid for by reversing cuts to taxes on banks – to assist families facing crippling increases in their loan repayments.

This would be targeted at those most at risk of reposession, such as homeowners on the lowest incomes and those seeing the sharpest rises in mortgage rates.

Under the party’s plans, anyone who sees their mortgage payments rise by more than 10 per cent of their household income would get a grant to cover the cost of that rise for the next year, up to a maximum of £300 a month.

‘The very least they could now do is to take responsibility for defusing it and protecting homeowners on the brink.

‘Families around the country are facing a nightmare before Christmas as their monthly mortgage payments go through the roof.

‘Rishi Sunak should step in now and offer a lifeline to those most at risk before it’s too late.

‘The Liberal Democrats are demanding an immediate ban on home repossessions over Christmas, followed by a mortgage protection fund to protect homeowners on the brink.

‘No one should face losing their home this Christmas because the Conservative Government crashed the economy.’