Eco warriors fly into rage as Heathrow runway gets go-ahead Eco warriors fly into rage as Heathrow runway gets go-ahead: Protesters vow to keep battling the £14bn project… and vow it will never get off the ground

Green campaigners last night vowed to keep fighting a third runway at Heathrow after it was dramatically cleared for take-off.

They claimed that the £14billion project may never see the light of day despite the Supreme Court overturning an earlier judgment against it.

Friends of the Earth pledged to ‘fight it all the way’ while environmental group Plan B said the verdict did not mean Heathrow expansion ‘now has the green light’.

The future of the two-mile runway – scheduled to open in 2030 – was thrown into doubt in February when the Court of Appeal declared it unlawful on environmental grounds. 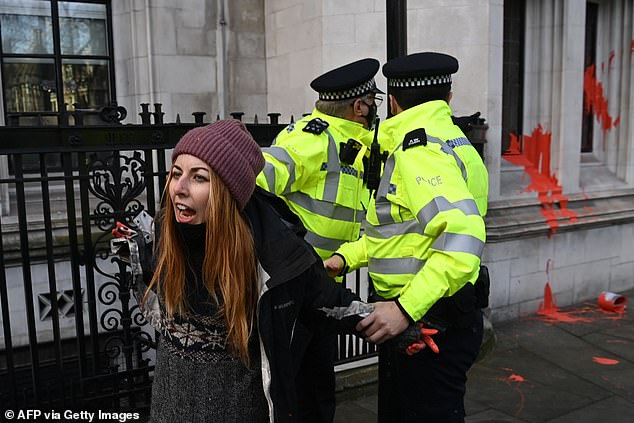 Friends of the Earth pledged to ‘fight it all the way’ while environmental group Plan B said the verdict did not mean Heathrow expansion ‘now has the green light’. Pictured, a campaigner is detained by police officers outside the Supreme Court in London

It said the expansion was illegal because Chris Grayling, the former transport secretary, failed to take account of the UK’s legal commitment to curb global warming under the 2015 Paris Agreement.

But the decision was reversed yesterday by a panel of five justices, who said Mr Grayling had acted lawfully by relying on domestic legislation rather than the Paris accord.

The decision is a blow to environmental groups, who now plan to take the case to the European Court of Human Rights in Strasbourg.

It also puts Boris Johnson – who once vowed to ‘lie down in front of the bulldozers’ to stop the runway – in a difficult position. The Government did not seek to overturn the Court of Appeal ruling and issued no response to yesterday’s judgment.

Heathrow said it ‘will allow Global Britain to become a reality’. But critics say there are significant doubts over whether the runway will ever be built. The London airport, which has lost billions from the collapse in passenger numbers, still needs to raise £14billion in private investment to begin construction. And it will have to apply for a development consent order from the Planning Inspectorate.

Even if this is granted, it could easily be blocked by Transport Secretary Grant Shapps, who may feel the plans are incompatible with the Government’s ambition to cut emissions to net zero by 2050. The airport also faces the prospect of demand stagnating for years due to Covid-19, raising questions over the need to expand.

British Airways, Heathrow’s biggest airline, said it does not expect passenger numbers to return to pre-pandemic levels until 2024. Heathrow also faces further action in the Court of Human Rights, to which the UK is still bound despite Brexit.

Will Rundle, head of legal at Friends of the Earth, said: ‘This judgment is no “green light” for expansion.

‘It makes clear that full climate considerations remain to be addressed and resolved at the planning stage. Heathrow expansion remains very far from certain and we now look forward to stopping the third runway in the planning arena. 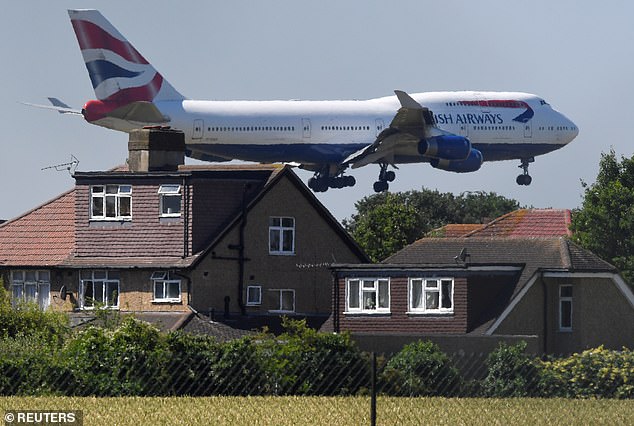 A British Airways Boeing 747-400 comes in to land at Heathrow airport in London. Plan B director Tim Crosland said: ‘The verdict does not mean Heathrow expansion now has the green light. It’s simply one hurdle cleared’

‘With ever stronger climate policy commitments that Heathrow must meet, it remains unlikely it will ever get planning permission for the third runway. Friends of the Earth will fight it all the way. We are in this for people everywhere facing climate breakdown right now, and for the next generation being left to inherit a world changed for the worse.’

Plan B director Tim Crosland said: ‘The verdict does not mean Heathrow expansion now has the green light. It’s simply one hurdle cleared.’

Heathrow said: ‘This is the right result for the country, which will allow Global Britain to become a reality. Only by expanding the UK’s hub airport can we connect all of Britain to all of the growing markets of the world, helping to create hundreds of thousands of jobs.’

A ‘global Britain’ must turn this dream into reality

Commentary by Alex Brummer City Editor of The Daily Mail

The dramatic reduction in flights worldwide due to the pandemic has done what decades of protests by green warriors failed to do – slashing carbon emissions and noise pollution.

For me personally, the silencing of the pre-dawn rumble of passenger jets from Asia and North America passing over my home on their final descent into Heathrow has been a blessed relief.

That said, I applaud the Supreme Court’s decision in overturning a ruling that a £14billion third runway at Heathrow would breach the Paris Climate Agreement. Now, we need the Government, planning authorities and the airport’s motley collection of overseas owners to get squarely behind it. 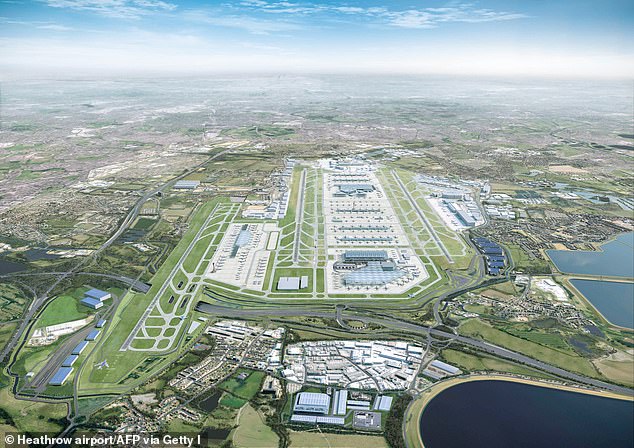 Not least because it could be a key element in Britain’s recovery from the pandemic, helping to drive our future as an entrepreneurial and ambitious trading nation outside the EU. Together with a wider infrastructure renewal which includes the HS2 fast rail link between London and the North, and a bold green energy agenda, it will bolster productivity, growth and skilled jobs.

The quest for a third runway has been battled out over two decades, with existing runways stretched to the limits in pre-Covid times. Indeed, Heathrow was Europe’s busiest airport, handling 81 million passengers a year compared with 65 million at its rival hub Frankfurt. That reflects Britain’s role as one of the world’s busiest financial centres, with a huge services sector accounting for nearly 80 per cent of national output.

But when Heathrow is operating at close to full capacity, it requires only the smallest blip – a malfunctioning baggage carousel, an industrial dispute or ice on the wings – to bring the airport to a grinding halt. 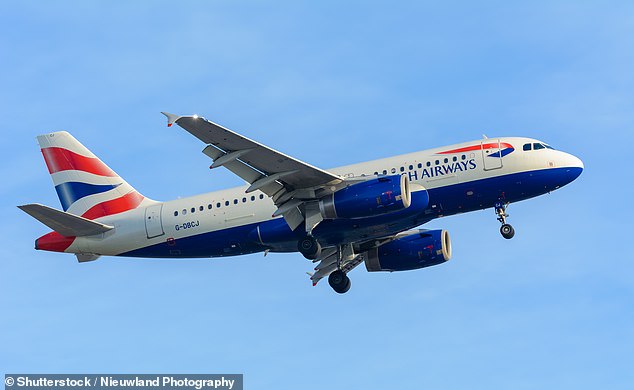 Johnson, we know, is a Heathrow expansion sceptic. Influenced at times by his ‘green’ buddy Lord (Zac) Goldsmith, the former MP for Richmond Park, he once threatened to lie down in front of the bulldozers if a third runaway were to be built (file image)

That is a personal nightmare for passengers and an enormous blow to Britain’s reputation as a good place to do business. In recent years Europe’s other entrepot airports have benefited at our expense because of their superior runway facilities. Schipol in Amsterdam, Charles de Gaulle in Paris and Frankfurt each have four runways.

And there is evidence to suggest that our chaotic Covid tier system and slowness to introduce airport testing has given rival airports the chance to gain yet more traffic.

Johnson, we know, is a Heathrow expansion sceptic. Influenced at times by his ‘green’ buddy Lord (Zac) Goldsmith, the former MP for Richmond Park, he once threatened to lie down in front of the bulldozers if a third runaway were to be built.

Since arriving at No 10, his opposition to it has cooled, while the House of Commons has voted overwhelmingly in favour. A government that is genuinely serious about its ‘Global Britain’ agenda has no option but to make a third runway a reality.

Yet the opposition remains formidable. Green groups are now vowing to take the fight to the European Court of Human Rights in Strasbourg. They are likely to be supported by Mayor of London Sadiq Khan. I find this astonishing given the economic desolation of the capital, to which an absence of tourists and international business visitors is a contributory factor. A staggering 22 per cent of the nation’s gross domestic product is generated in the greater London area.

And despite their supportive words yesterday, there must be serious concern about the willingness of Heathrow’s owners to get behind the runway. With passenger numbers down 88 per cent year-on-year in November to 747,000, will Heathrow’s major investors, including the Spanish construction empire Ferrovial and the Qatar Investment Authority, really want to dig deep right now?

Earlier this year, Heathrow chief executive John Holland-Kaye warned the project should be delayed for five years. But we cannot wait. Britain needs an expanded Heathrow that can handle the 142million passengers a year projected in the next ten to 25 years as soon as possible. Covid should not be an excuse for putting that vital expansion on hold.

Overseas owners who have drained Heathrow of £4billion in dividends since 2012 have a duty to fight for immediate expansion. Anything less will be a betrayal.