Fears of damaging winds and ‘flash flooding’ as downpour continues

Melburnians have had to swap their bathers for their brollies after the city was hit with steady rainfall on Friday, as much of Victoria prepares for more potentially damaging heavy rainfall and flash flooding.

More than 40 millimetres fell over Melbourne’s Olympic Park between 9am and 1pm on Friday. At Moorabbin Airport, there was 36.2 millimetres of rain in four hours. 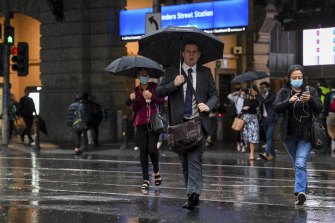 Umbrellas were out in force outside Flinders Street Station on Friday.Credit:Penny Stephens

More rain is expected to be on the way on Friday afternoon with storms reforming in Victoria’s west, meaning another soaking for Melbourne commuters on the way home.

An SES spokeswoman said the car was stuck under a tunnel and needed to be towed out, but the person was able to escape and call for help.

The SES has received 568 calls for assistance in Victoria over the past 24 hours, primarily for flooding, building damage and fallen trees.

Flooding on Flinders Lane in the Melbourne CBD meant tram services along Swanston Street were suspended for more than half an hour.

In Newport, businesses along Melbourne Road near the corner of Mason Road had floodwater nipping at their doorsteps, according to callers to 3AW.

Towns in central Victoria were inundated on Friday, with Avoca receiving 67 millimetres over the past 24 hours, while the Mount William weather station in the Grampians National Park recorded 58 millimetres across the same period.

The Bureau of Meteorology said that storms were “re-developing in the west”, with a severe thunderstorm warning in place for the South West and Wimmera districts.

“Severe thunderstorms are likely to produce damaging winds and heavy rainfall that may lead to flash flooding in the warning area over the next several hours,” the bureau said.

“Locations which may be affected include Horsham, Nhill and Hamilton. The warning area may move eastwards during the afternoon and evening.“

Nhill, around 260 kilometres north-west of Ballarat, recorded 18.8 millimetres in a thunderstorm at midday, with the bulk of the rain falling in 15 minutes.

A heavy rainfall warning for the Northern Country, North Central, North East and parts of Central and Mallee districts is also in place for Friday afternoon, potentially affecting Ballarat, Echuca and Wodonga.

“Heavy rainfall leading to flash flooding has already been observed in western and central parts of the warning area, and will extend eastwards during the day while contracting from the west,” the bureau said. 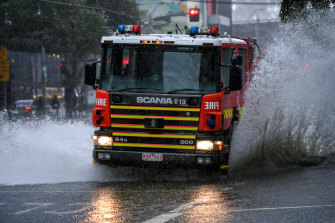 “Widespread totals of 30 to 60 millimetres are expected, with isolated heavier falls of 80 to 90 millimetres possible. The heaviest falls are more likely to be experienced with thunderstorms.”

The SES said in dangerous driving conditions, people should “pull over away from trees, drains, low-lying areas and floodwater” and avoid travel altogether if possible.

“Check that loose items, such as outdoor settings, umbrellas and trampolines are safely secured. Move vehicles under cover or away from trees. Stay indoors and away from windows.” 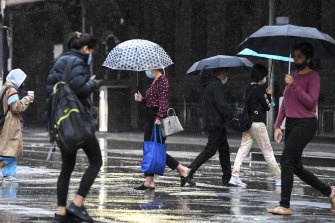 Commuters try to avoid the rain in Melbourne on Friday. Credit:Penny Stephens