FURIOUS Donald Trump has branded Justin Trudeau "two faced" after the Canadian PM was caught gossiping about him at Buckingham Palace.

The US President gave Mr Trudeau the cold shoulder and barely glanced around as the pair exchanged tense words onstage at the Nato meeting today. 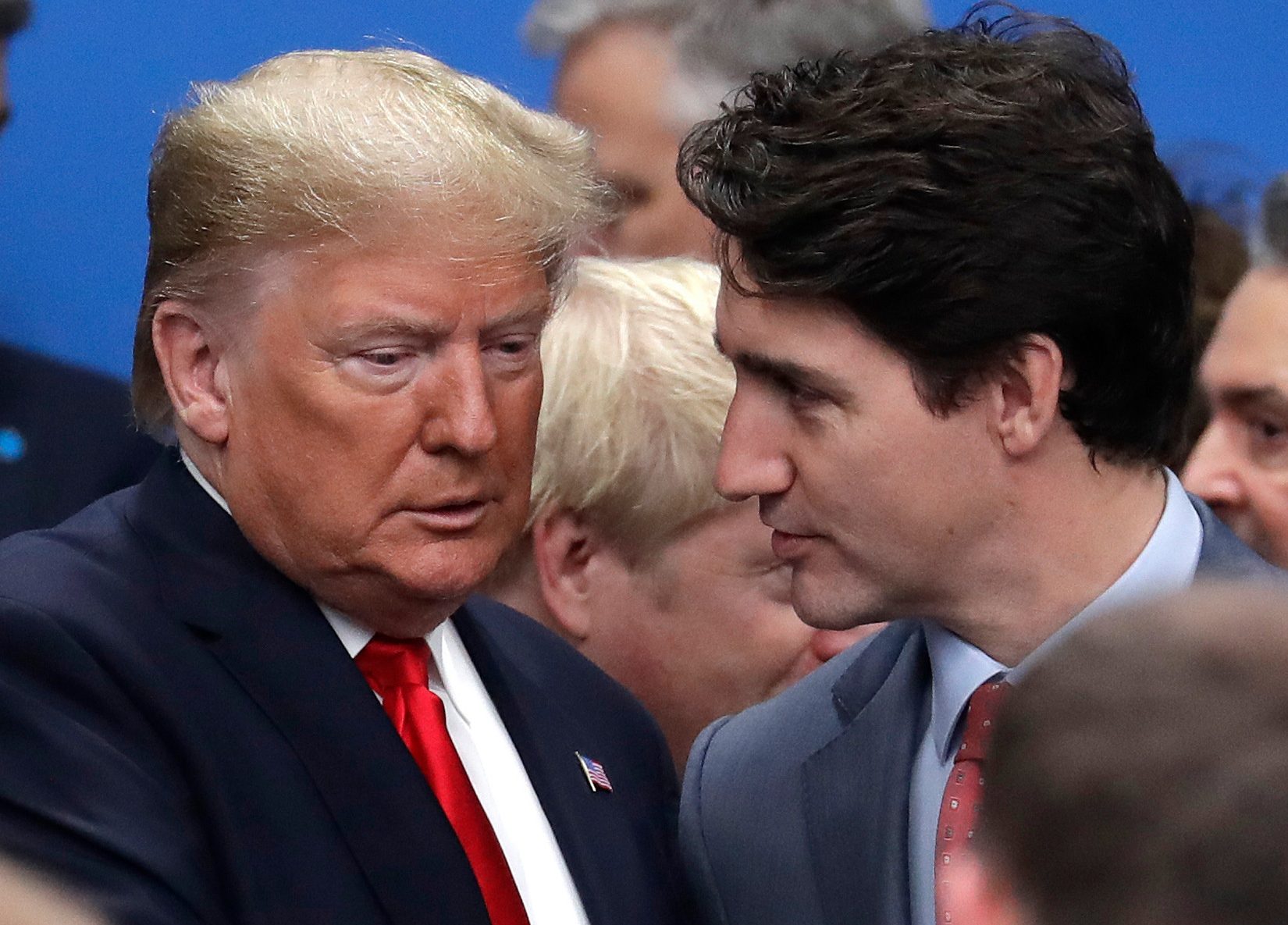 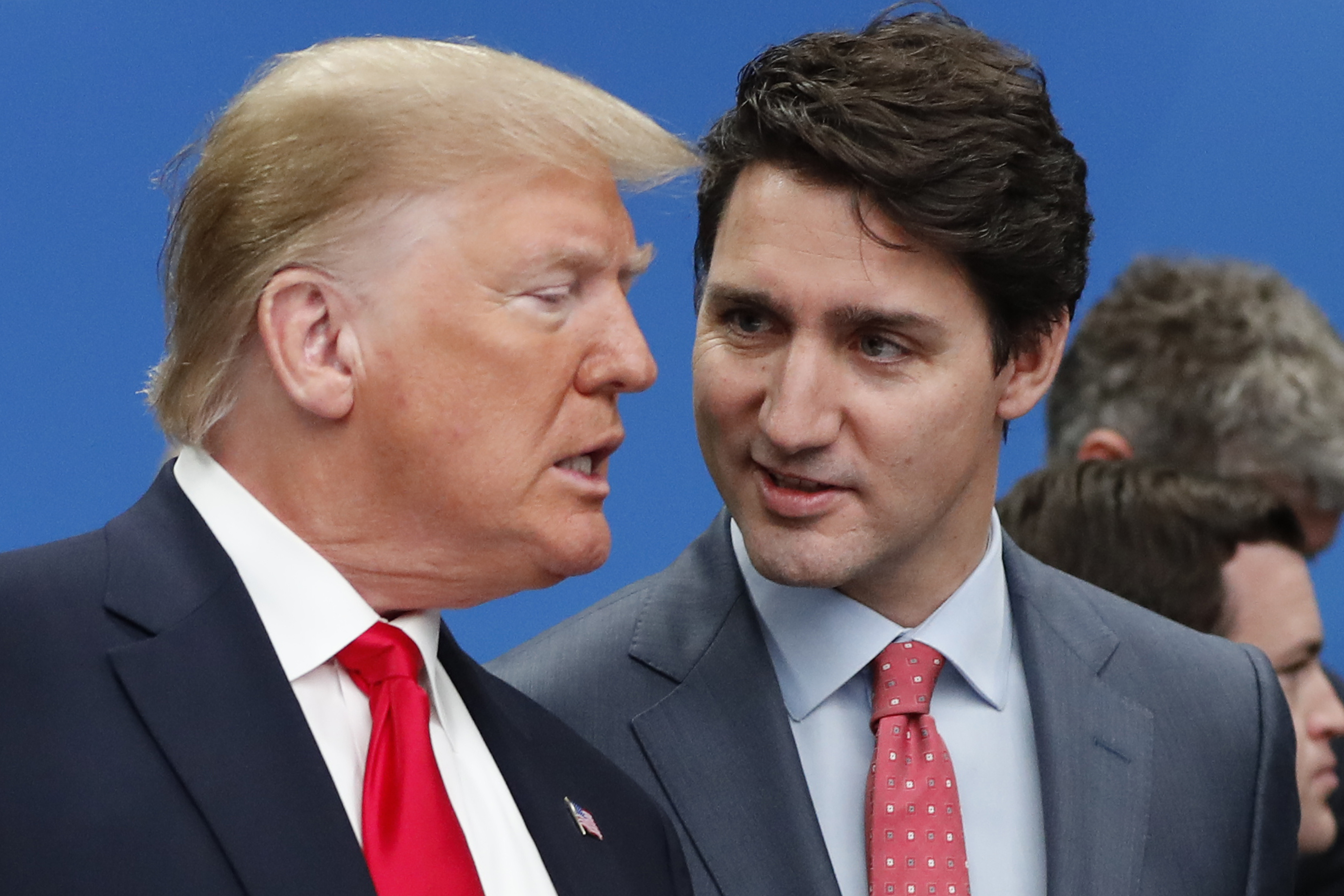 Last night the Canadian leader was caught chatting about Trump by a hot mic at Buckingham Palace.

Furious Trump responded by blasting the Canadian President this afternoon – before fleeing the Nato summit early and cancelling a planned press conference.

Earlier awkward photos showed the President appearing to throw up a hand to the smiling Canadian leader with his back turned.

"Honestly, with Trudeau, he's a nice guy. But I called him out on the fact he's not paying 2 per cent.

"And I guess he is not very happy about.

"He is not paying 2 per cent, he should be. They have money."

While sitting next to Angela Merkel, Trump says Germany is a "little under" in its NATO contributions and that "they'll talk about it".

"We’ll be having a meeting with Denmark.

"Then we’ll probably be flying directly back to Washington."

Hilariously, he was later caught on a mic of his own, saying: "Oh, you know what they'll say – he didn't do a press conference.

"That was funny when I said the guy's two faced, you know that."

Last night Trudeau and a group including Boris Johnson and Princess Anne joked about a "40-minute press conference" that had run late.

The video, from the reporting pool via the Canadian Broadcasting Corporation, offered little context but saw Johnson ask Macron "is that why you were late?"

It was then that Trudeau interjected, saying: "He's late because he takes a 40-minute press conference off the top."

Another part of the conversation saw Trudeau later chuckling: "You just watched his team's jaws drop to the floor."

But the PM denied he was laughing at Mr Trump’s expense, adding: “That’s complete nonsense I don’t know where that’s come from.”

Trudeau insisted today he has an "excellent and very productive relationship with Mr Trump."

He claimed he was talking about Trump's "impromptu press conference" in the hot mic incident, and the "jaw dropping moment" was when he announced that the US could host the next G7 at Camp David. 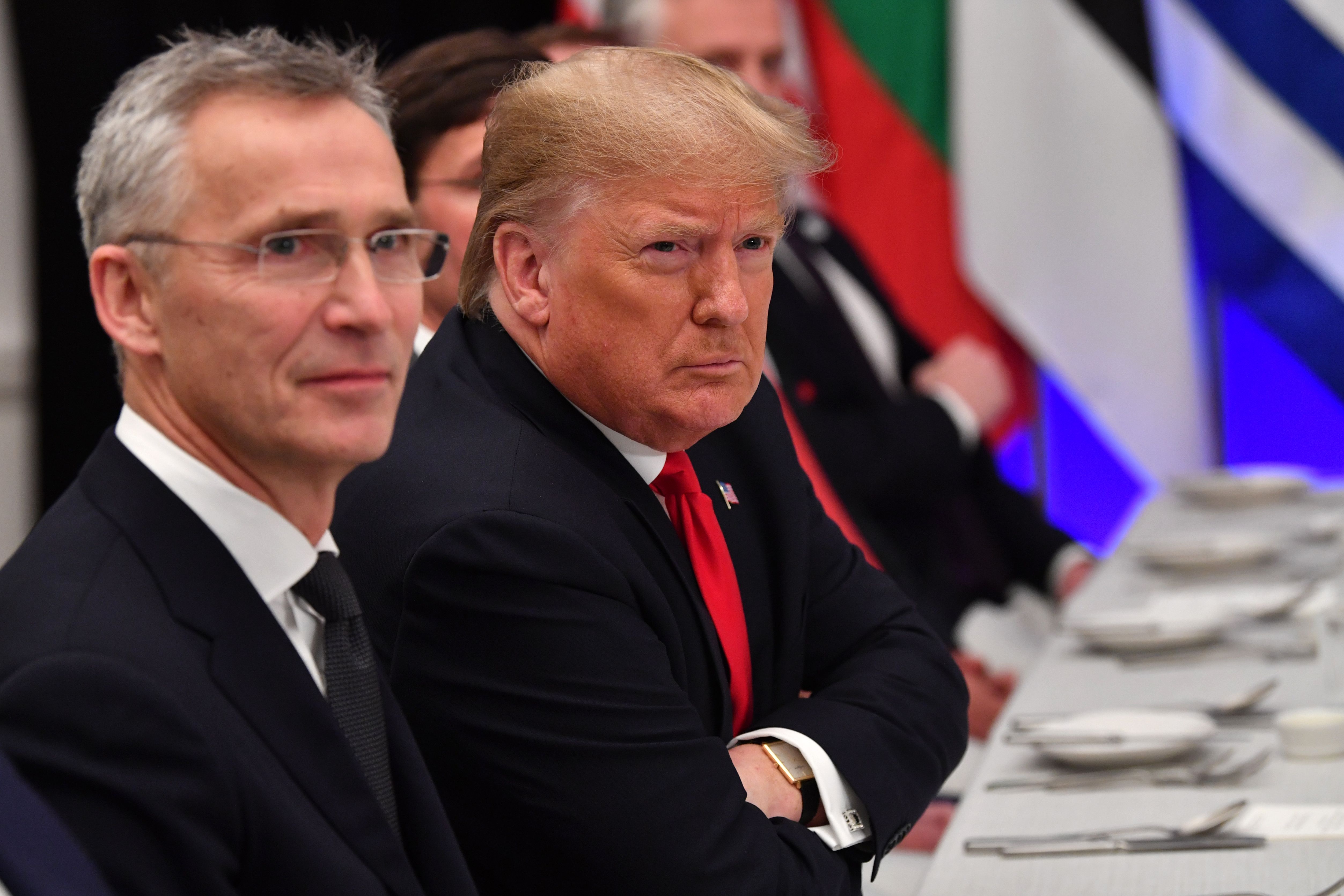 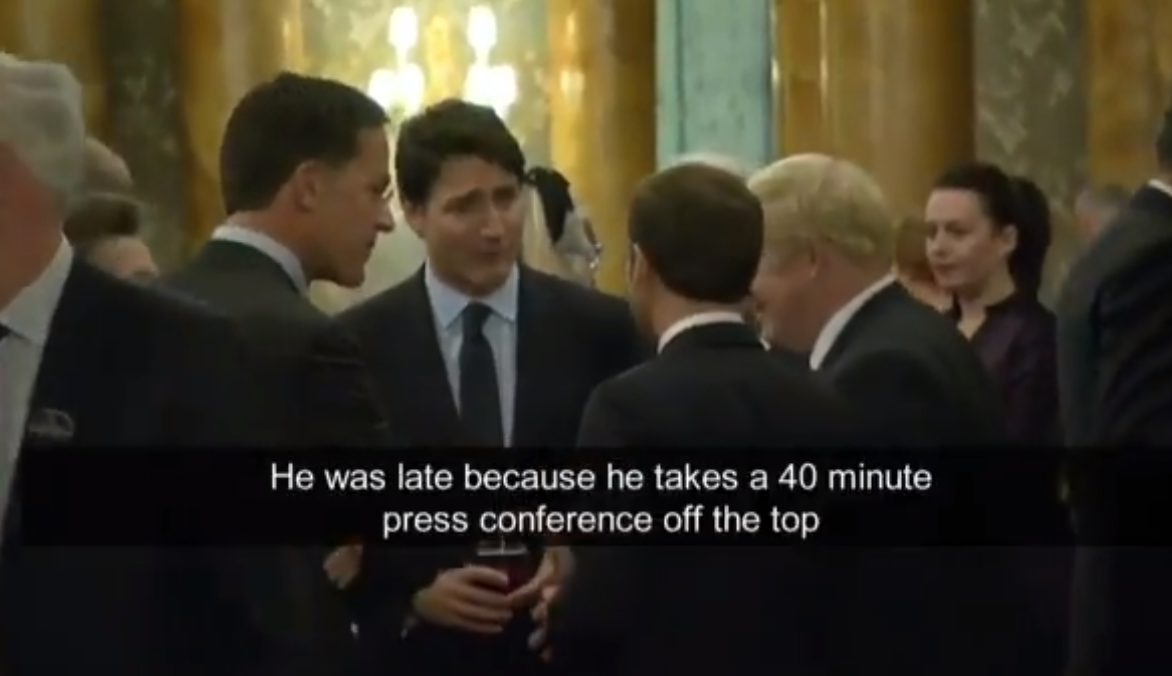 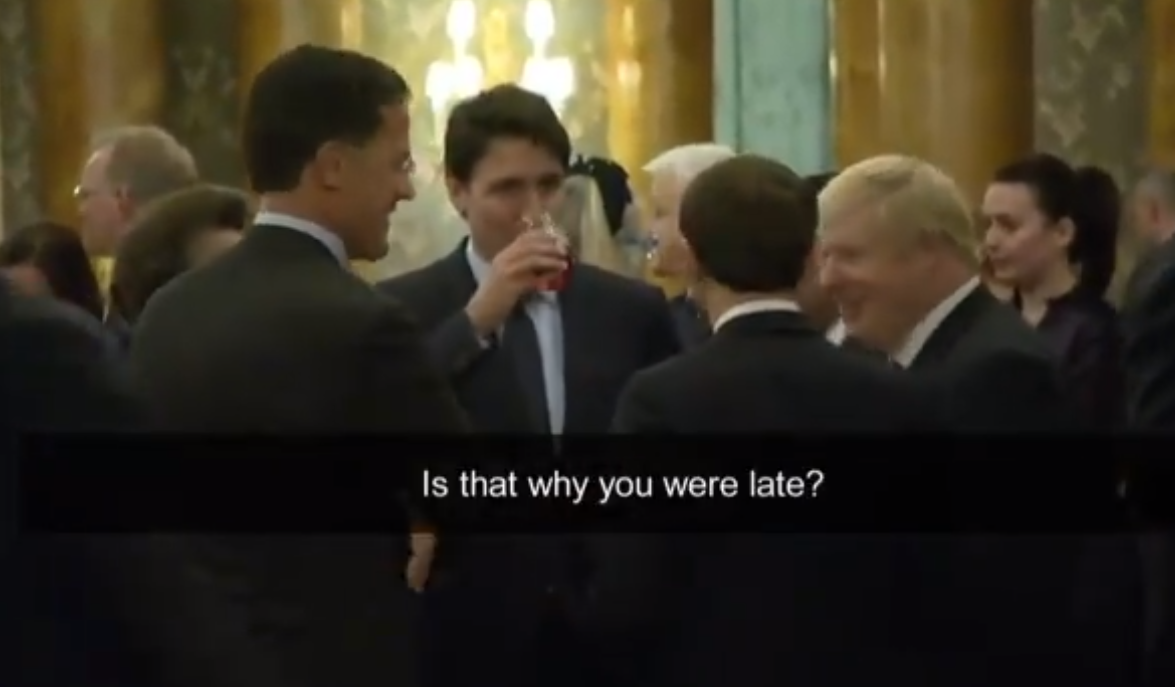 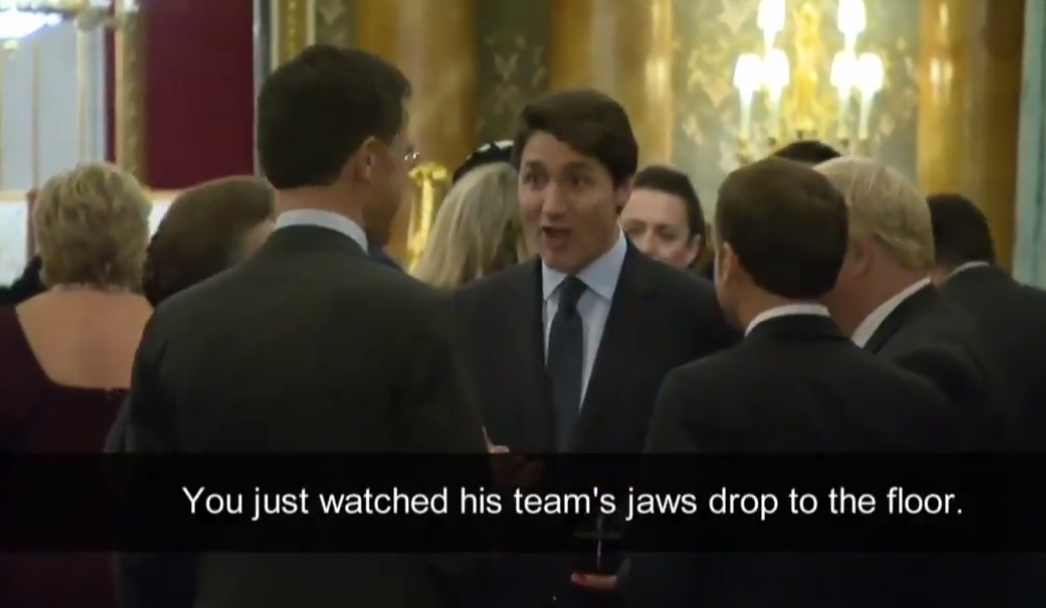 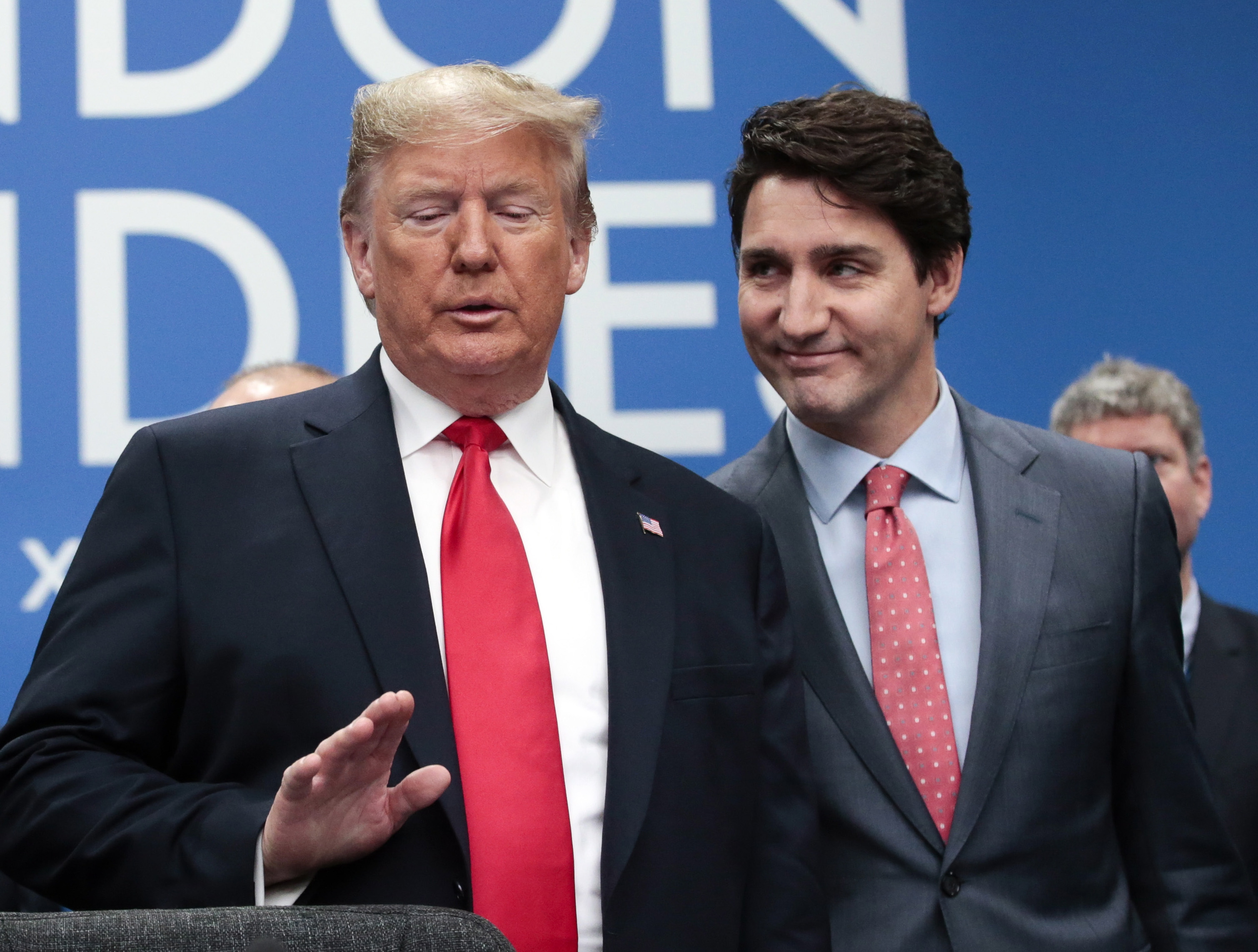 Mr Johnson shook hands with Donald Trump onstage at the Nato summit as he told leaders Britain's commitment to the alliance was "rock solid".

The PM smiled as he finally greeted the US President after distancing himself publicly over Tory fears Trump could blow up the election campaign.

After greeting the 29 leaders at the historic 70th anniversary summit, Mr Johnson said: “The reason Nato is so successful, is that it provides peace and security for 29 countries, it’s very simple.

“It's safety in numbers.

“One for all, one for one – that’s the core of the Nato security guarantee, it works.”

Boris met with Mr Trump last night for prviate drinks at No10 after a royal reception with the Queen and other Nato leaders at Buckingham Palace.

Conservative campaign bosses are trying to keep the number of public appearances the PM makes with POTUS to an absolute minimum.

They want to stop the president from tearing up the rigidly controlled Tory election messaging with any explosive comments on the NHS or Brexit.

It's safety in numbers. One for all, one for one – that’s the core of the NATO security guarantee, it works.

Jeremy Corbyn and Nigel Farage are both waiting in the wings to try to weaponise Mr Trump’s arrival to their own benefit.

Yesterday Mr Trump vowed to stay out of British politics only to add shortly after that he thought Boris would do a “great job” as PM.

The president tweeted this morning: "Enjoyed my meeting with Prime Minister Boris Johnson last night. Talked about numerous subjects including Nato and Trade."

The French premier called Nato “brain dead” – prompting Mr Trump to describe his comments as “very nasty” before the pair met on Tuesday at the US ambassador's residence in London.

Mr Macron's original comments were prompted by the Turkish offensive against the Kurds in northern Syria – regarded by most members as key allies in the fight against ISIS – following the US decision to withdraw troops from the region.

Mr Macron later acknowledged in a tweet that his statements had "triggered some reactions" but stood by his remarks.

Today’s meeting at a hotel in Hertfordshire is expected to consider new threats, including in the areas of cyber and space, after the alliance last month declared space one of its operational domains alongside air, land, sea and cyber. 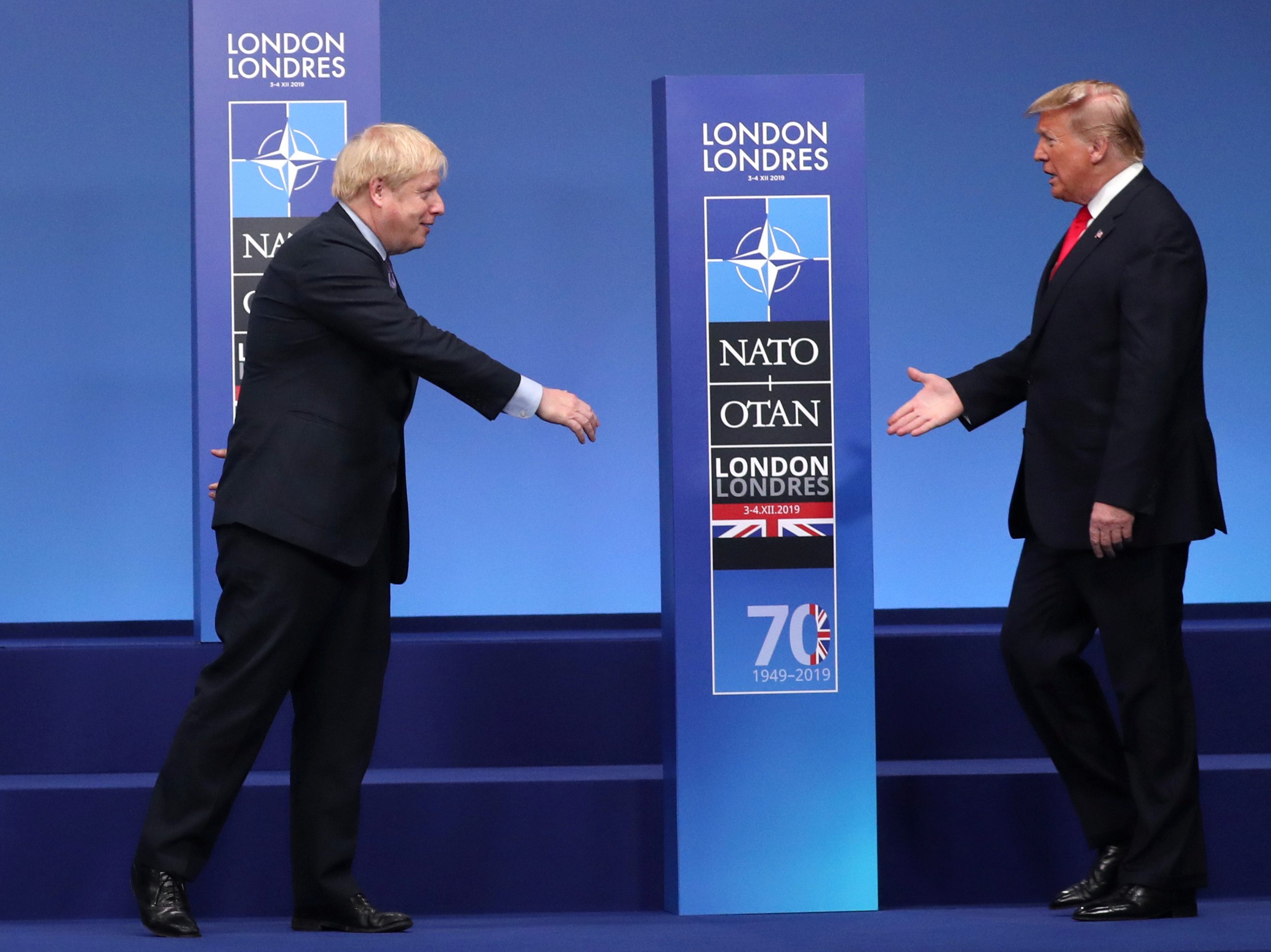 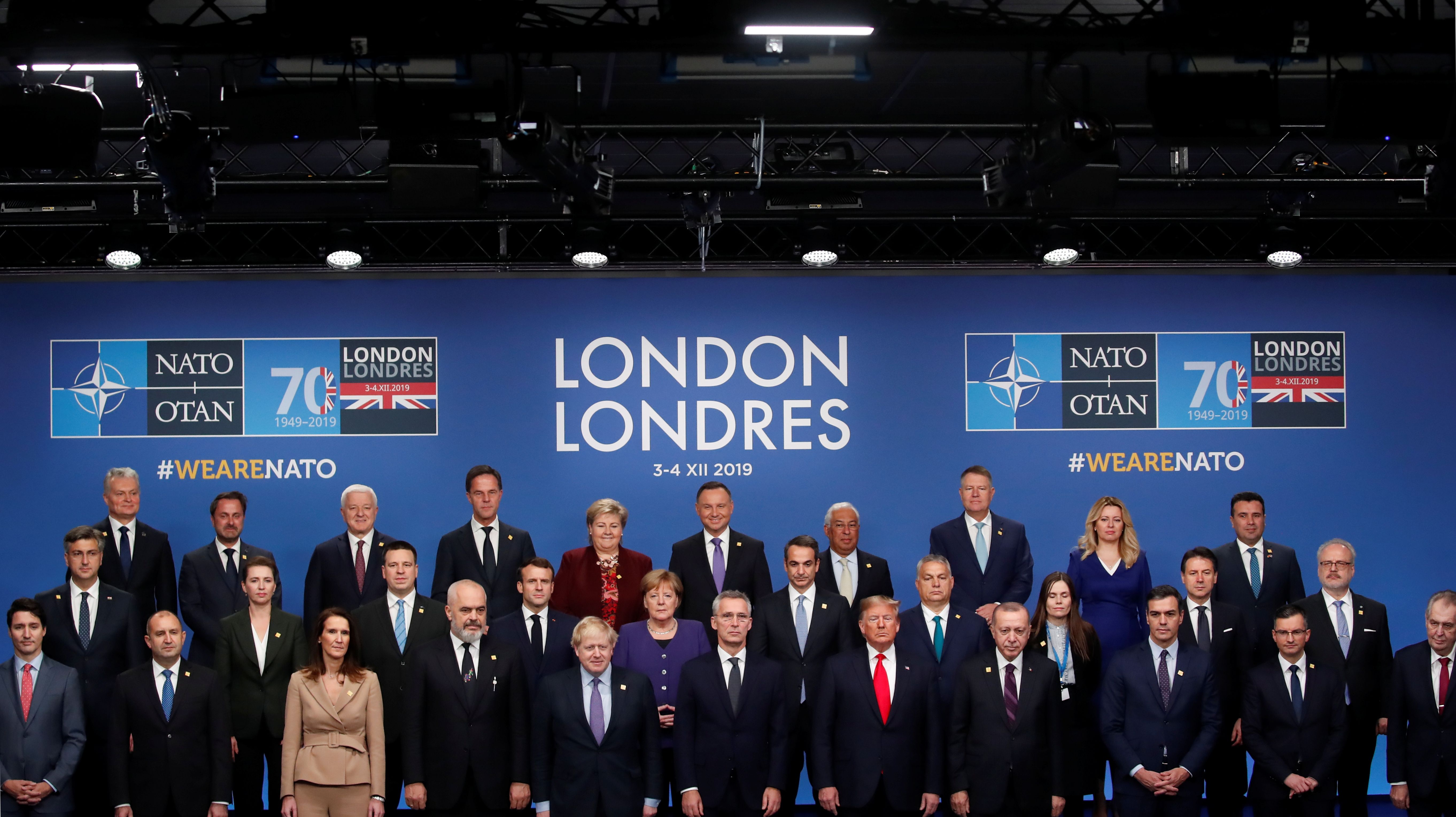 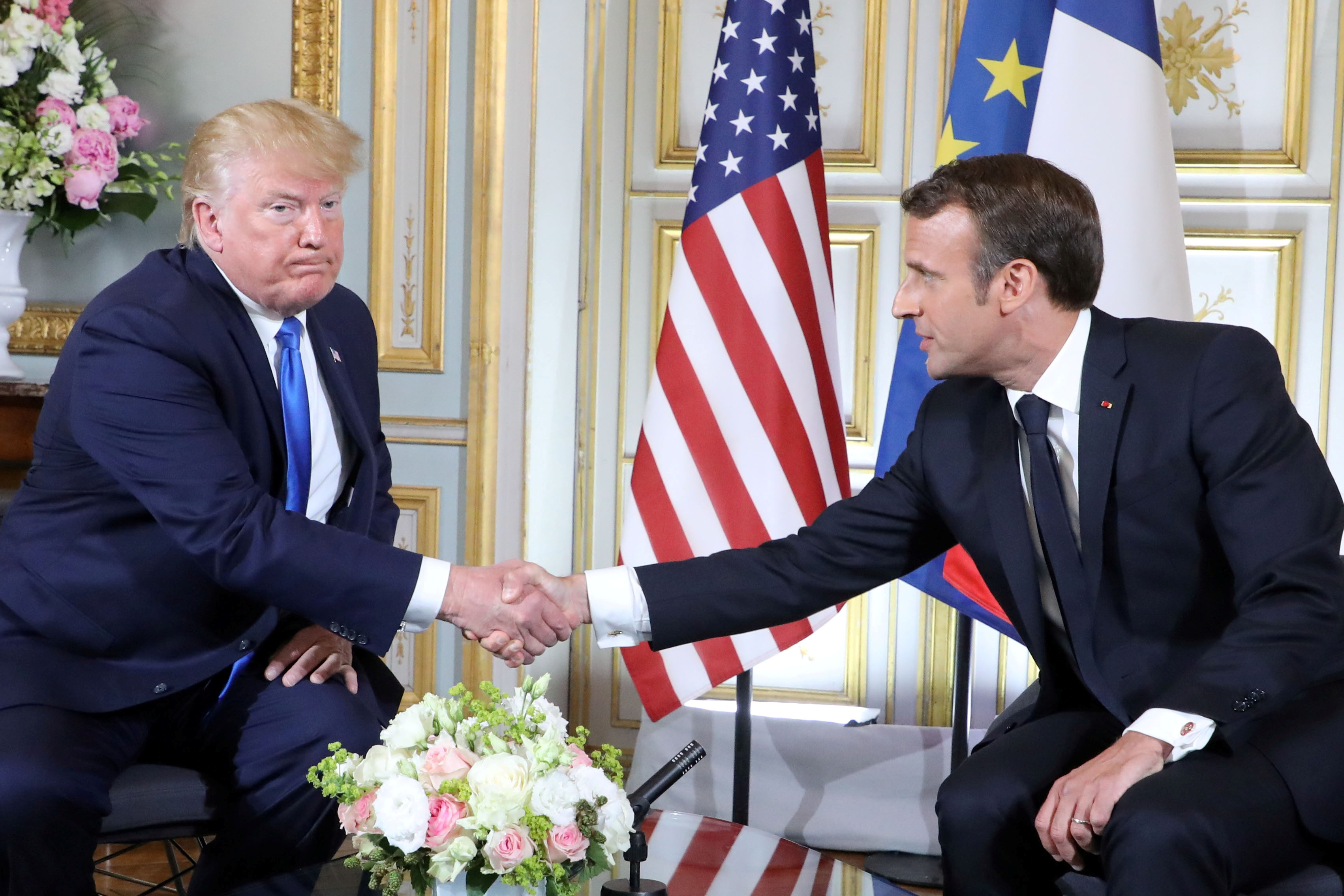