Alright for some, isn’t it? Fury as ‘giggling’ Foreign Office civil servants enjoy ‘£50,000’ booze-up in the air from Stansted to the Lake District and back in the Prime Minister’s plane… while millions of families prepare for cost-of-living crunch

Foreign Office civil servants enjoyed a £50,000 booze-up in the air in the Prime Minister’s plane – while millions prepare for a cost-of-living crunch, it was claimed last night.

They relaxed on a 700-mile-round trip from Stansted airport to the Lake District and back again for what the Government called a ‘maintenance’ trip.

Staff are reported to have tucked into a fancy dinner, while the Foreign Office confirmed to the Sun there was alcohol on board, but refused to say if any was consumed. Sources said the cost of the jolly was likely to have been around £50,000.

The group of 12 men and women – who would normally have been working on key foreign issues including potentially the war in Ukraine – appeared to bask in their VIP-style day out, taking selfies on the red carpet laid out for them and again after boarding the Airbus A321, according to reports.

Labour’s Shadow Trade Secretary Emily Thornberry said: ‘This would be utterly disgraceful behaviour at the best of times, but in the middle of our country’s current crisis, it is shameful beyond words.’

John O’Connell, chief executive of the TaxPayers’ Alliance, added: ‘Taxpayers will wonder why pen-pushers had the privilege of taking a government jet out for a spin.’ 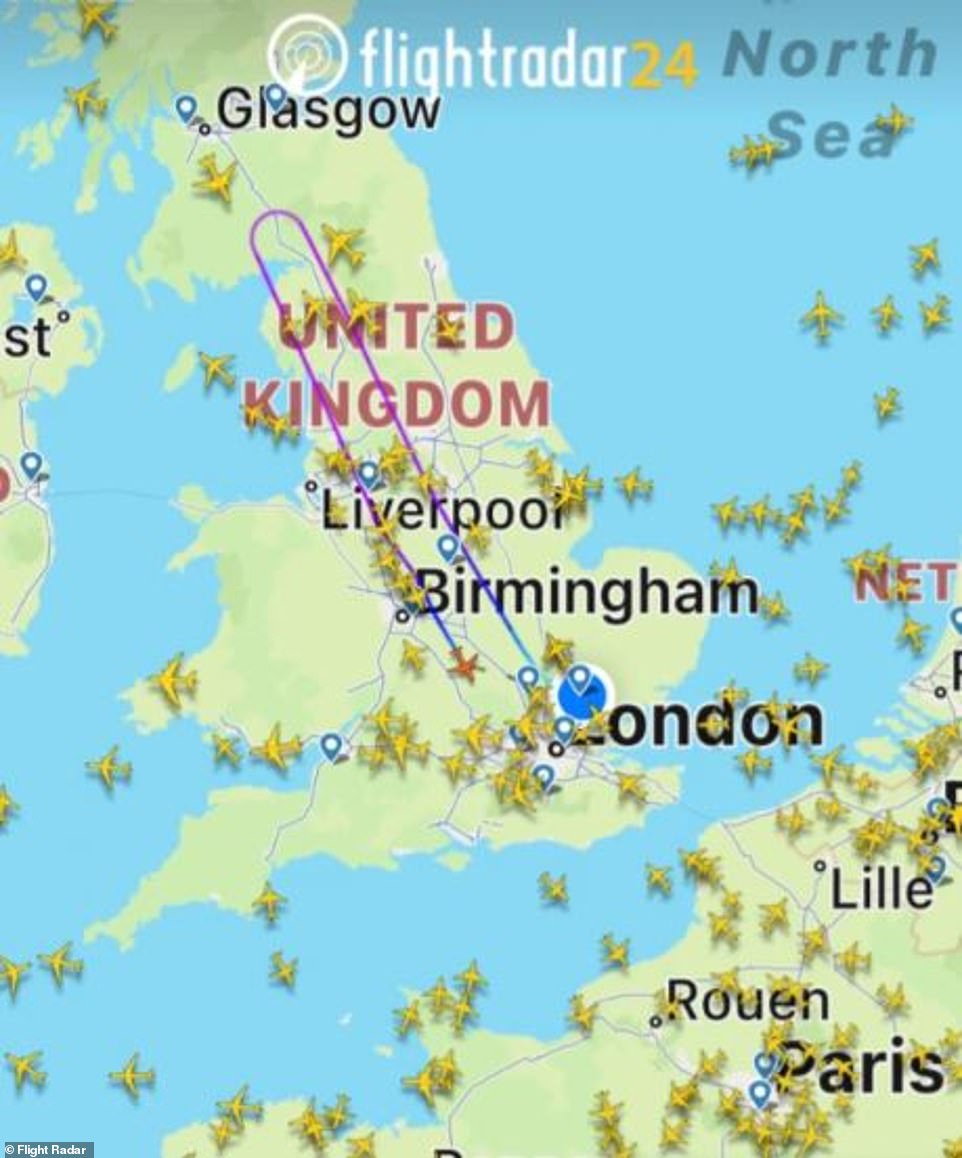 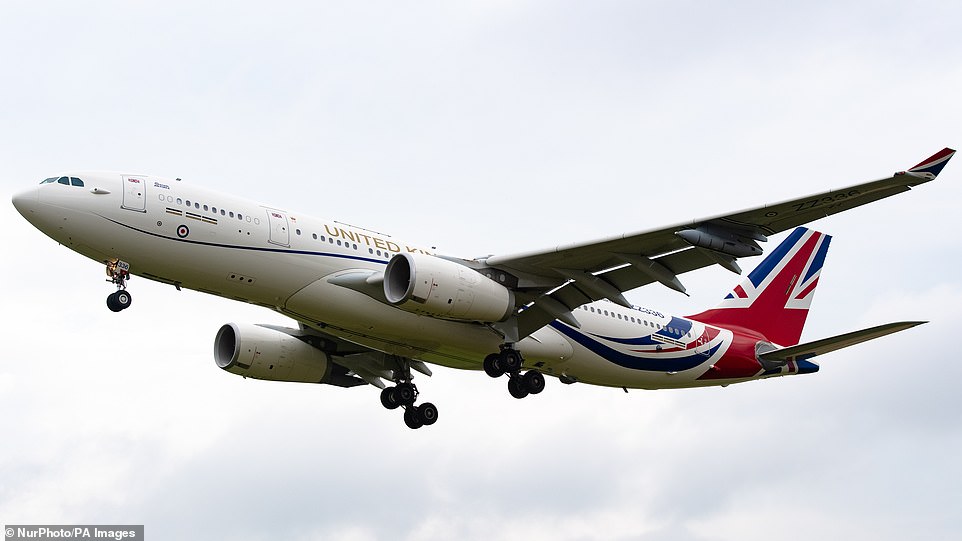 The plane the civil servants enjoyed, which was recently the subject of a new £900,000 paint job, is expected to take the new Prime Minister to Balmoral to be sworn in by the Queen next Tuesday 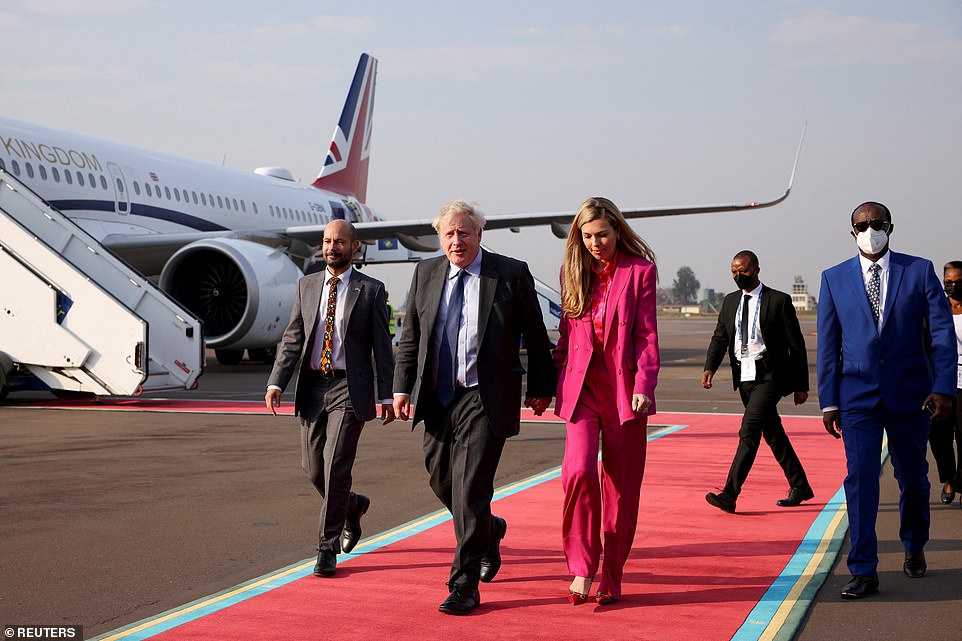 Boris Johnson and wife Carrie walk after disembarking from their plane as they arrive for the Commonwealth Heads of Government Meeting, in Kigali, Rwanda

Civil servants have been accused of enjoying a range of perks in recent months, including deals to work from home permanently.

Official figures show the number of Government employees on special ‘home-working’ contracts has almost tripled since the pandemic.

The biggest increase was in the Department for Environment, Food and Rural Affairs (Defra), where the number rose from 117 before Covid struck to 380 earlier this year.

In the Department for Work and Pensions (DWP) the number rose from 14 to 60 over the same period.

Meanwhile, experts warned that new gold-plated pensions handed out to MPs, civil servants and other public sector workers will cost the taxpayer an extra £6billion this year alone due to rampant inflation.

This will add to the huge annual bill for retired state employees, which already stands at £60billion – one-third more than the entire defence budget.

It will also fuel a simmering row over ‘pensions apartheid’ between generous public sector provision and the inferior, risky plans for employees in the wealth-creating private sector.

It comes against a backdrop of an ever-growing squeeze on ordinary families, with the boss of the UK’s third biggest energy firm admitting millions face ‘a winter like never before’ amid claims the number of Britons living in poverty is set to rise from three million to 14 million.

Ovo Energy chief Stephen Fitzpatrick has said that helping low income families with energy bills ‘has to be the first order of business’ for the next prime minister with annual gas and electricity bills predicted to reach £7,263 by next April.

And inflation could hit 22.4pc next year if gas prices remain as high as they are now, according to a terrifying forecast by Goldman Sachs.

The plane the civil servants enjoyed, which was recently the subject of a new £900,000 paint job, is expected to take the new Prime Minister to Balmoral to be sworn in by the Queen next Tuesday.

A government spokesman told the Sun: ‘In order to comply with Airbus and aviation industry rules the aircraft was legally bound to operate a maintenance flight before September 4 or face ­significant additional storage costs.’