Game of drones: Now airborne parcel delivery gets its own air corridor as new air traffic system set up for flying postal service

Ambitions of an airborne postal service have moved a step closer due to a ‘flight corridor’ being created near Reading.

The five mile long aerial highway, the first commercial route of its type in the world, will be set up south of the Berkshire town by the end of the year, according to the Times.

Drone pilots will be able to to control them beyond their line of sight, which is not normally the case under existing regulations.

A new air traffic control system for unmanned devices will monitor the corridor and feed automated instructions to the drones to keep them away from others or change path if they’re in danger of crashing.

The corridor, a third of a mile in width will operate in the same normal airspace used by commercial jets, helicopters and light aircraft. 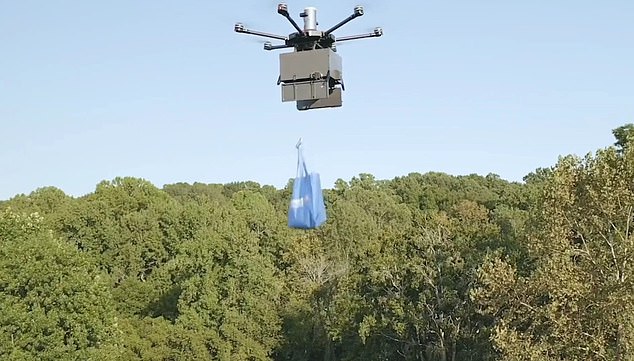 The move still needs to be rubber-stamped by the Civil Aviation Authority (CAA) but it hoped to be live next year in the first large-scale trial of its kind.

Small parcels, medical supplies and blood or tissue samples are examples of the kind of packages that could be delivered via drones in the controlled area.

Under current rules, drones must be flown away from built-up areas, within a pilot’s visual range, usually up to 1,600ft, and cannot soar higher than 400ft to avoid other aircraft.

However, the new system created by Altitude Angel, an aviation technology company based in Reading, monitors every drone movement and gives them the freedom to fly.

The air traffic control system will be created by using radar and multiple tracking sensors within the corridor.

Drone operators can send instructions such as ‘change flight path, hold, return or land’ but the control system is then able to intervene if the request is not followed for whatever reason.

The system will initially be tested using two drones, travelling in either direction simultaneously, before then being scaled up to create four drone lanes going each way and two or three highways at different altitudes.

Richard Parker, founder and chief executive of Altitude Angel, told the paper: ‘The size of this step cannot be underestimated.

‘Beyond visual line of sight automated flight in unrestricted airspace is a very significant barrier to overcome in order to realise the vision of mass-commercial drone usage.’