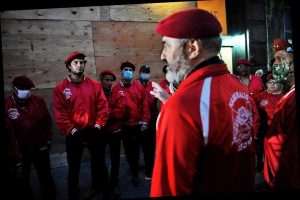 Guardian Angels gear up to patrol NYC in wake of election: ‘Fear is growing’

Moving trucks out in full force in one Manhattan neighborhood

Curtis Sliwa and his Guardian Angels group will be patrolling around the infamous Umbrella hotel in Kew Gardens on Monday — the site of the Big Apple’s first shooting homicide on New Year’s morning.

Sliwa — who constantly claims that city officials have abdicated public safety — said Guardian Angels patrols will hand out “wanted” posters that include surveillance photos of four suspects in the shooting that occurred in front of the hotel.

The aspiring mayoral candidate said the red beret and satin jacket wearing Angels will rent hotel rooms — if necessary — to investigate what’s going on inside, particularly to observe any gun-toting patrons and other criminal elements the hotel may be renting to. The voluntary patrols will work closely with Kew Gardens residents and the NYPD.

“The Kew Gardens community has been fighting to close this hotel for some time now. We’re going to have a presence there,” Sliwa said.

“One bad location can destroy a neighborhood. It’s got to stop.”

The hotel is located right across from Borough Hall and near the courthouse and district attorney and FBI offices.

“Right across the street from Borough Hall! This is government impotence. This is an embarrassment,” he said.

“The fact that we have to come to Kew Gardens is a bad sign for the city. Nothing else good can happen unless there is public safety. We’ll be forcing the issue.”

The NYPD’s 102 Pct. had a patrol stationed by the hotel virtually 24/7 following a shooting over the summer and hundreds of complaints from residents about patrons renting rooms suspected of or engaging in drug dealing and prostitution.

Residents and lawmakers from Kew Gardens warned city officials for months that a tragedy would occur unless the hotel was shut down or the operator’s business practices were curtailed to stop renting rooms to gun-toting trouble-makers.

Then Robert Williams, 20, was gunned down during the shooting spree in front of the hotel.

Police on Sunday said there’s been no arrests and the investigation into the shooting death continues.

Sliwa said the troubled hotel will be a test for new Queens Borough President Donovan Richard, a former councilman and chairman of the public safety committee. Richard said he will push to close the hotel.

Residents held a protest in front of Borough Hall in August calling the hotel a public safety nuisance and a potential danger to nearby residents.

Authorities told The Post closing the hotel is a complicated legal issue. The Umbrella building is not just a hotel reserved for lodgers. The upper floors are apartment rentals with tenants.