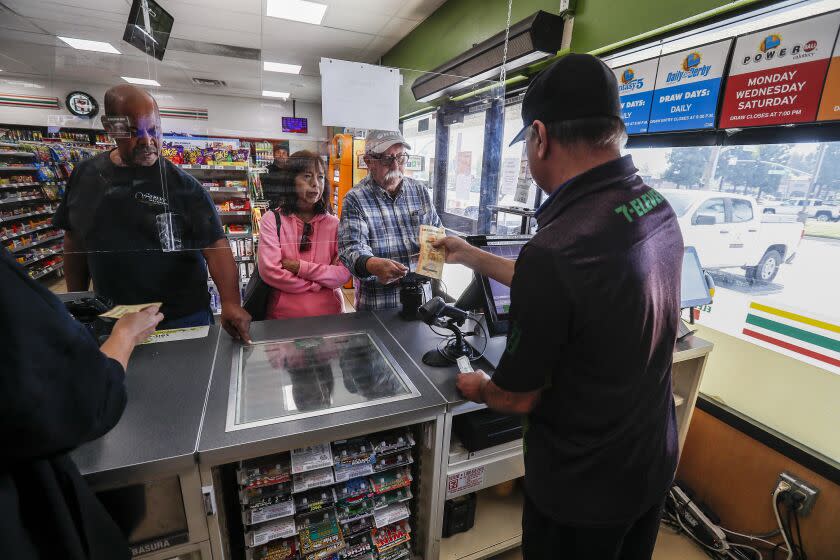 The multistate Powerball jackpot has grown to the second largest in the lottery's history, an estimated $1 billion.

It was not yet clear Monday night whether any jackpot-winning tickets had been sold.

Although there were no jackpot winners in Saturday's drawing, some Powerball players won lower-tier prizes, including six tickets that matched all five white balls but missed the Powerball — two of which were sold at California retailers, according to Powerball officials.

The jackpots are growing and so is our excitement! 😲 Get ready to play for the biggest treat on Halloween, #Powerball is at $1 Billion! Don't miss out and pick up your tickets at your favorite Lottery retailer today! #JackpotAlert#PlayResponsibly#CALotterypic.twitter.com/YRllPofv5G

The tickets worth more than $550,000 were sold at Ramirez Liquor in Pico Rivera and Mad Dog Café in Alpine County, east of Sacramento, according to California Lottery.

If someone wins Monday’s jackpot, it will be the fifth-largest grand prize in U.S. lottery history, according to Powerball officials. The current record was set in 2016 at $1.586 billion, shared by Powerball winners in California, Florida and Tennessee.

There have been 37 Powerball drawings since August without a grand prize winner, according to Powerball officials. The last jackpot was hit Aug. 3 in Pennsylvania.

The odds of winning the jackpot are 1 in 292.2 million, according to Powerball officials.