This is the horrifying moment a victim was kicked and beaten unconscious by a gang of men on a bench in a town centre in broad daylight.

The victim was sitting on a park bench in Bletchley, Buckinghamshire, before being punched in the face and head, dragged to the ground and kicked and stamped on.

A woman, who was also sitting on the bench, then went over to the victim – whose identity and gender is not known – as she yelled at the men to stop. 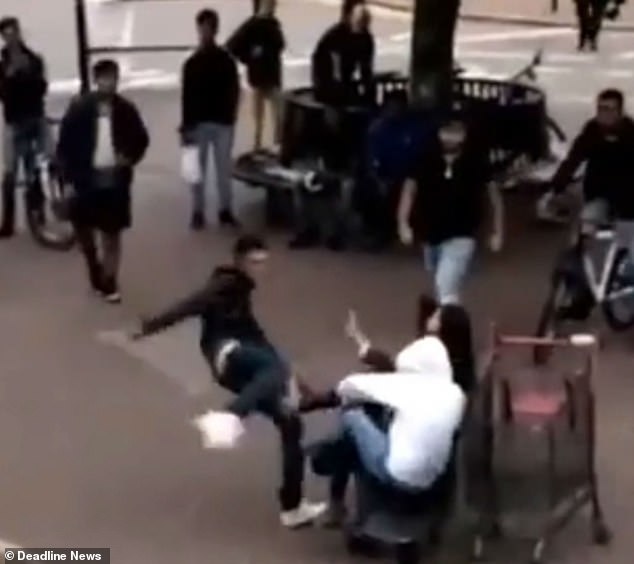 The victim was sitting on a park bench in Bletchley, Buckinghamshire, before being punched in the face and head, dragged to the ground and kicked and stamped on

The video taken on the Queensway road in the town, which was posted to Facebook yesterday, shows two people sitting on a bench as a man is seen standing over them.

The man can be heard swearing at the duo before he punches one in the face. He then takes a step back and kicks the victim who is still on the bench.

At this point others begin to gather round the hooded victim as the man continues to punch her in the face. A woman is heard repeatedly shouting: ‘Oi, no!’

The victim is seen trying to use their leg to block the blows but the man continues the attack, before suddenly another man runs up and punches the victim in the face. 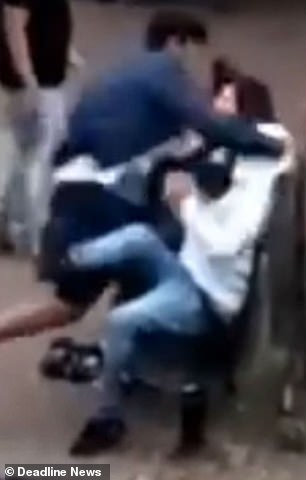 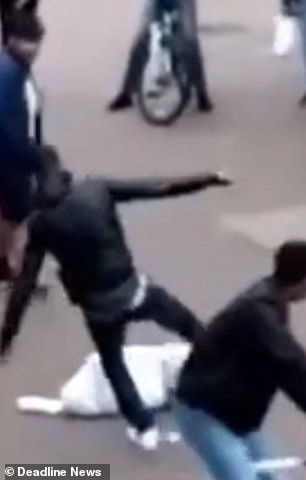 The clip, which was posted to Facebook yesterday, shows the brutal attack in the town centre

The victim is then dragged off the bench, before the second attacker stamps on the victim’s head multiple times, then the first man kicks them in the back.

The thugs eventually back off leaving the victim motionless on the ground. The woman stands over the victim and starts arguing with the thugs.

Thames Valley Police and South Central Ambulance Service have been contacted for comment by MailOnline today.