Home » World News » How crucial was the UQ-CSL vaccine to Australia and what options do we now have?

How crucial was the UQ-CSL vaccine to Australia and what options do we now have? Should we be surprised that a potential vaccine for COVID-19 has been dropped?

The news that a deal for the Morrison government to buy more than 50 million doses of the University of Queensland’s potential coronavirus vaccine has been abruptly terminated will come as a shock to many.

But it is important to put this announcement in context.

While we still do not yet know full details around just what has gone wrong with the University of Queensland’s vaccine, we do know two things.

First, vaccines often fail clinical trials. That is the point of a clinical trial – to check if a vaccine is safe and effective. Given the University of Queensland’s vaccine candidate uses an entirely new and untested technology, it should not surprise that there have been speed bumps. 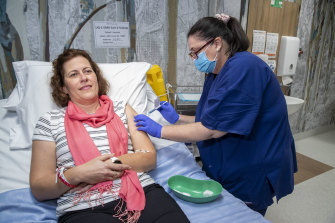 A volunteer takes part in trials of UQ's vaccine candidate in July. Credit:University of Queensland

Second, Australia’s vaccine strategy is not wholly reliant on this vaccine. Australia’s government has done the prudent thing and invested in a wide range of different vaccines with different technologies.

So, what do we know? How should we think about this? And what else is in the pipeline?

Are the results of this phase-1 clinical trial a surprise?

It is a shame this project – on which millions of federal and state government dollars were spent – has not worked out.

But scientific research projects often fail, and they often fail at different steps along the way. There are no guarantees. Really, the amazing thing is we have not seen more COVID-19 vaccines fail clinical trials.

New vaccines and drugs have to go through three phases of clinical testing before they can be approved, with a sharp drop-off rate at each stage. Last year, US researchers looked at 406,038 clinical trials between 2000 and 2015, and found that only a little over half of vaccines studied ever made it to phase 2 – and only 33.4 per cent ever reached approval.

A closer look at the University of Queensland’s vaccine shows us why there was always a lot of uncertainty around this project.

The vaccine is built on molecular clamp technology, a new idea that tries to address an old problem with subunit vaccines – vaccines that contain a small sliver of a virus that you want to train the immune system to neutralise. In the case of COVID-19, that’s the spike protein.

Once injected, these proteins tend to lose their shape, meaning the immune response is not perfect. The University of Queensland’s big idea was a set of clamps to hold the protein in just the right configuration to generate a strong immune response.

Molecular clamp vaccines are entirely novel. Such a vaccine has never been made before. Indeed, before COVID-19 reared its head, the UQ team expected to spend the next few years working on their prototype. Instead, what should have been a proof of concept became seen by the public as a pandemic-buster. Compare that to mRNA vaccines, which scientists have been working on for decades.

For such an early-stage project to not work perfectly on the first try does not come as too much of a surprise.

How important was the University of Queensland-CSL deal? Will this leave us unprotected?

It was important without being crucial. The UQ-CSL deal was a major investment, and if it had worked would have delivered 50 million doses of vaccine in 2021.

The biggest advantage UQ’s vaccine enjoyed was it could be made here by CSL. Unfortunately, the company does not have the technology to make the cutting-edge mRNA vaccines that currently lead the race, meaning they will all have to be manufactured offshore and shipped in – when we can get them.

But there was always a good chance this vaccine would fall over. Australia’s government, to their credit, have built a strategy that was not reliant on it succeeding. And UQ’s vaccine was not a global front-runner; indeed, because it was such new technology it was running a little behind the pack.

That’s the key takeaway here: the UQ vaccine would have been nice to have but its failure does not leave us unprotected.

What else is in the pipeline?

In response to the cancellation of the contract, the Australian government announced it would increase orders for the AstraZeneca and Novavax vaccine. The government claimed this was likely to mean Australia would have earlier access to a vaccine.

Prime Minister Scott Morrison said this: "We are increasing our production and purchase of AstraZeneca vaccines from 33.8 million to 53.8 million, and we're increasing our access to the Novavax vacine from 40 million to 51 million – so that's an extra 20 million doses of AstraZeneca, and an extra 11 million doses of Novavax. The AstraZeneca vaccines, of course, manufactured here in Melbourne by CSL."

Apart from the UQ-CSL option, Australia has signed four other separate agreements for COVID-19 vaccine supply.

We already have 10 million doses – likely enough for 5 million people – of Pfizer’s mRNA vaccine on order, due to arrive in 2021. That vaccine is the clear frontrunner and has already achieved regulatory approval in Britain and Canada; Britain administered its first dose on Tuesday.

Pfizer’s vaccine is likely to need two shots, and must be transported at minus-70 degrees. The company has designed sophisticated dry-ice-filled “Eskies” to ship the jabs around the world, but logistics are going to be a major hurdle for this vaccine.

Then we already have 3.8 million doses of AstraZeneca’s vaccine due in early 2021, with CSL holding a contract to make another 30 million doses in Australia over the course of 2021.

The trial data on that vaccine is spotty. The developers initially claimed a 90 per cent protection rate, but later admitted that was only when they accidentally gave the wrong doses; people given the correct dose achieved about 62 per cent protection. More studies need to be done – but the vaccine did seem to be wholly protective against severe life-threatening COVID-19, data published in the Lancet on December 8 show.

Compared to these vaccines, UQ’s was already some way back in the race.

We also have access to an international agreement called COVAX, which lets us purchase a broad range of vaccines if they succeed. But it’s not clear how useful that agreement actually would be to us – it really exists to ensure less-wealthy countries have fair access to a vaccine.

crucial, How, the, UQ-CSL, Vac, Was
World News