How YouTuber 'CyclingMikey' has caught out thousands of drivers

How YouTube vigilante ‘CyclingMikey’ has caught out thousands of drivers including Frank Lampard, Guy Ritchie and Chris Eubank leading to hundreds of convictions…but has his war against motorists FINALLY hit a dead end?

The vigilante cyclist who today lost his case against a celebrity talent agent he accused of trying to bulldoze him with his Range Rover is a road safety warrior who has successfully shopped hundreds of drivers including Guy Ritchie and Chris Eubank.

Mike Van Erp, 50, better known by his YouTube name, CyclingMikey, rides around London with a GoPro to catch drivers using their phones – often in traffic jams or by red lights – before confronting them on video and noting down their number plate.

While he claims to have caught more than 2,000 offenders since first strapping on his ‘helmet-cam’ back in 2006, he suffered a rare setback today after a jury cleared 60-year-old Paul Lyon-Maris of charges of dangerous driving and common assault.

Mr Van Erp came across Mr Lyon-Maris on September 9 last year by a junction near London’s Regent’s Park – a familiar hunting ground. Noticing the driver had performed an illegal right turn; he confronted the agent by standing in front of his car only to end up on his bonnet for some 60ft.

The cycling campaigner can be heard on video yelling: ‘Why are you driving into me?’ Lyon-Maris then shouts back: ‘I’ve got an appointment at half past eight. Get out of the way!’ Following a short argument, Mr Van Erp says ‘Hey Siri, call 999’ before officers arrive at the scene. 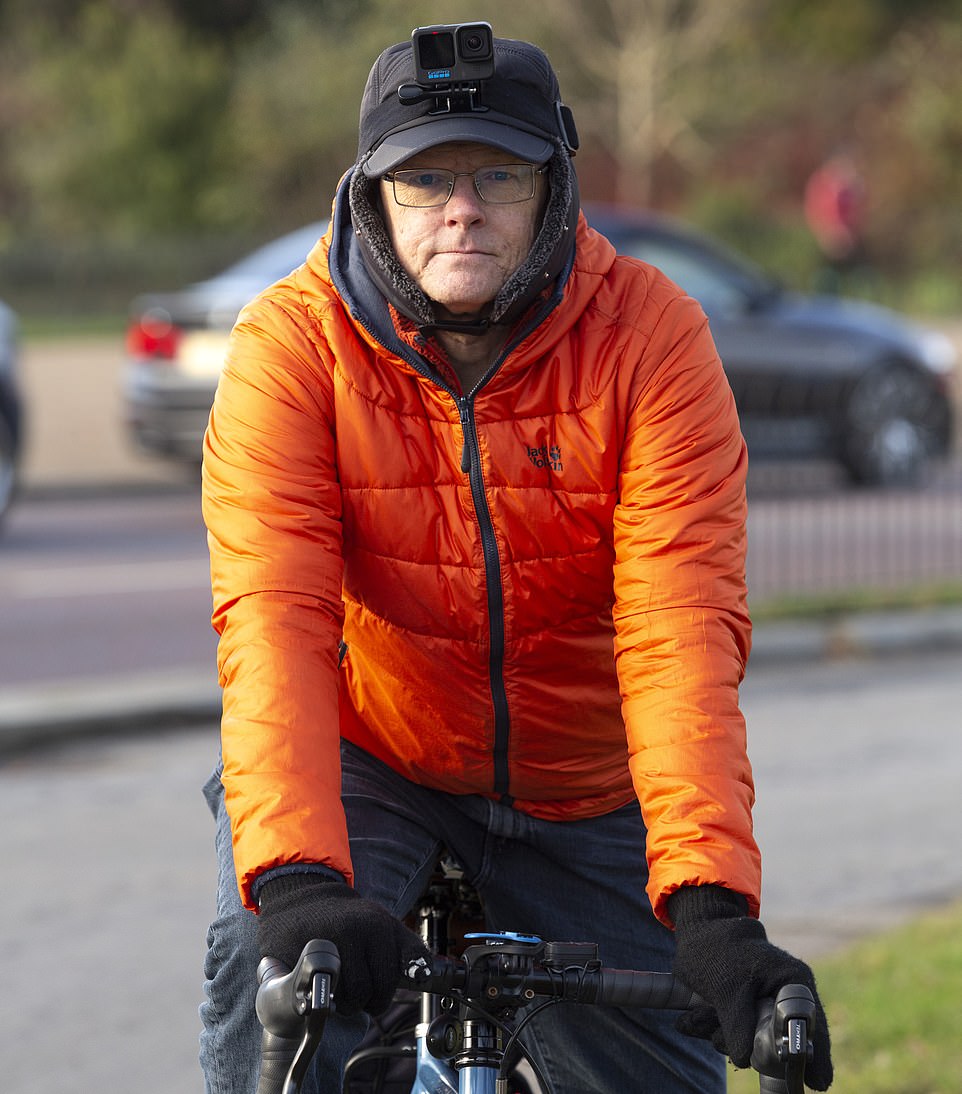 Mike Van Erp, 50, better known by his YouTube name, CyclingMikey, rides around London with a GoPro to catch drivers using their phones – often in traffic jams or by red lights – before confronting them on video and noting down their number plate 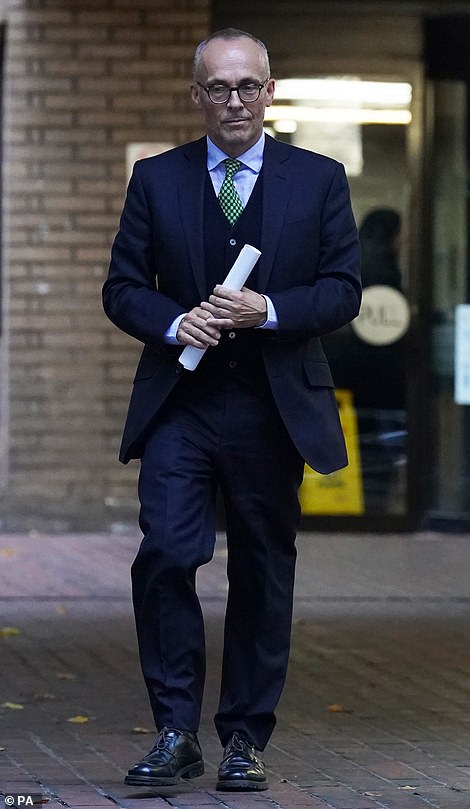 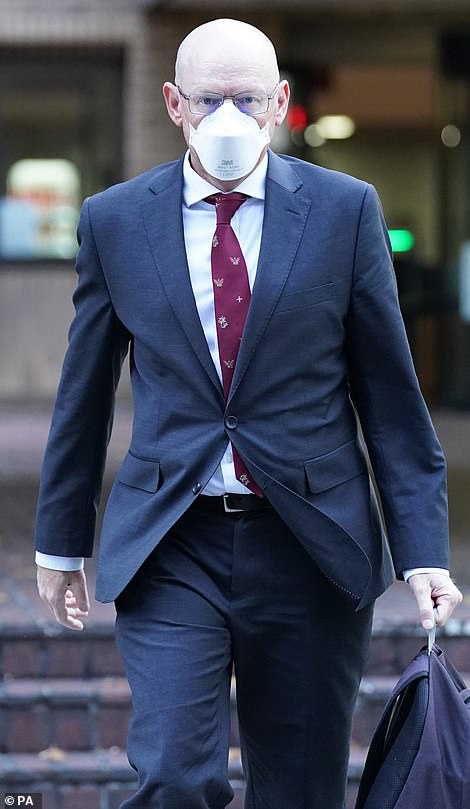 Paul Lyon-Maris, 60, (left) was said to be fuming when his route was blocked by Mike van Erp, 50 (right). The YouTuber, known as CyclingMikey, is well known for his videos catching out drivers including celebrities Guy Ritchie and Chris Eubank 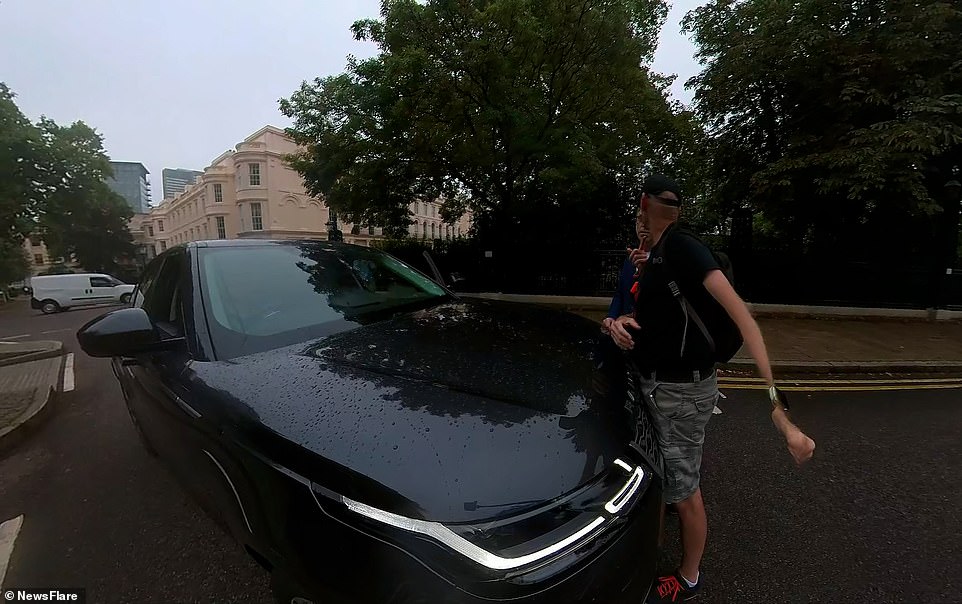 In court, prosecutor James Dean said he ‘used his car as a weapon’ in an act of ‘road rage’ against Mr Van Erp. But Mr Lyon-Maris told jurors he felt ‘intimidated’ when the activist ‘jumped’ on his bonnet, and he was cleared of dangerous driving and common assault. He had already accepted a fine for the illegal turn.

Mr Van Erp, who works as a carer, told Southwark Crown Court how he first gained ‘notoriety’ after broadcaster Jeremy Vine retweeted one of his videos of him on the bonnet of a silver Mercedes.

One of his most high profile scalps came in the summer of 2020 when he caught Guy Ritchie driving his Range Rover through Hyde Park. The film director was ultimately given six points, fined and banned from driving for six months.

Asked afterwards what motivated his crusade, he told MailOnline: ‘My dad was killed by a drink-driver when I was 19, I still remember him, so I feel very strongly about road safety. I first got my helmet camera in 2006 and realised its potential.’

In a separate interview, the Dutch national – who was born in Zimbabwe – recalled how he had arrived at the site to see his father’s body in the road, covered by a rug. Mr Van Erp claims to have caught more than 1,000 drivers in the last three years alone, after it became easier for civilians to report crime via the internet. Over 600 have been prosecuted.

Earlier this year, it emerged that former England footballer Frank Lampard had been caught on camera by Mr Van Erp holding a phone while at the wheel of his car. Lampard was filmed driving his £250,000 Mercedes G-wagon holding a cup of coffee and his mobile but escaped prosecution because the CPS said there was ‘insufficient evidence’. 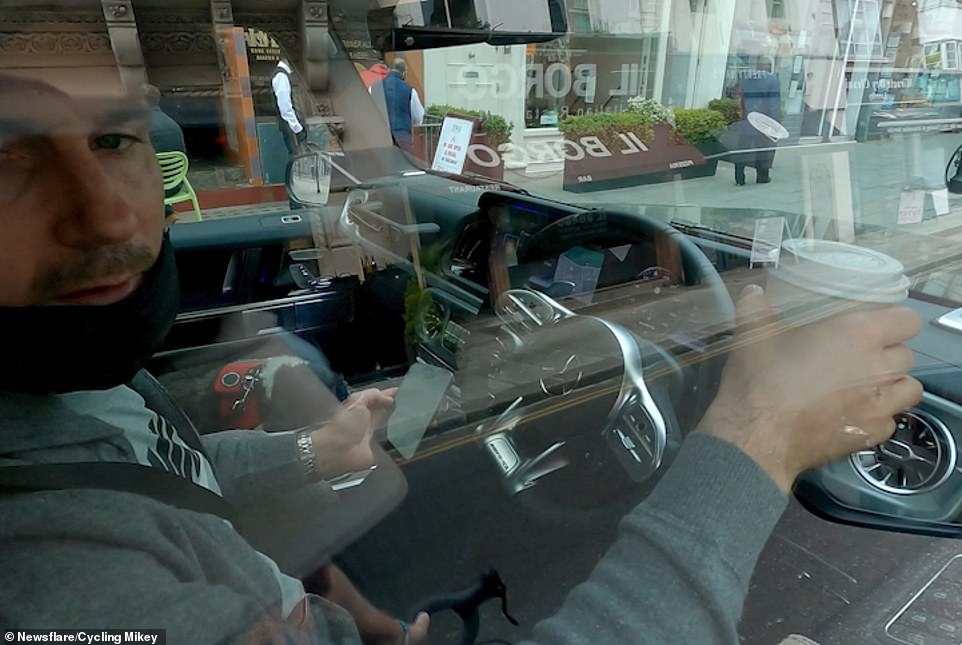 Earlier this year, it emerged that former England footballer Frank Lampard had been caught on camera by Mr Van Erp holding a phone while at the wheel of his car. Lampard was filmed driving his £250,000 Mercedes G-wagon holding a cup of coffee and his mobile but escaped prosecution because the CPS said there was ‘insufficient evidence’

The ex-Chelsea midfielder had employed the services of Nick Freeman — the lawyer known as ‘Mr Loophole’ due to his success at getting famous clientele off — to defend him. He’d denied a charge of ‘using a handheld mobile phone/device while driving a motor vehicle on a road’ and Mr Freeman successfully argued that it could not be proved that Lampard was interacting with his phone.

Others have not been so fortunate. In September 2021, former boxer Chris Eubank was given three points and fined for running a red light after trying to flee from Mike, who had challenged him for trying to connect to his hands-free phone system.

‘Apparently he said he was worried that I was a stalker,’ Mr van Erp reflected in an interview with the Daily Mail. ‘Although I can’t imagine Chris Eubank really being scared of anyone, can you?’

Having moved to the UK in 1998, aged 26, with his then-wife — they have since divorced — to work in IT, Mr Van Erp said he became acutely aware of dangerous motorists as he cycled to work.

‘I was commuting in from Kent to London and there would be at least one incident a day where my personal safety was at risk,’ he says. ‘People driving right up behind me or within a whisker of me.’ So, by 2006, when chat on cycle forums turned to the availability of helmet cameras, he decided to buy one. 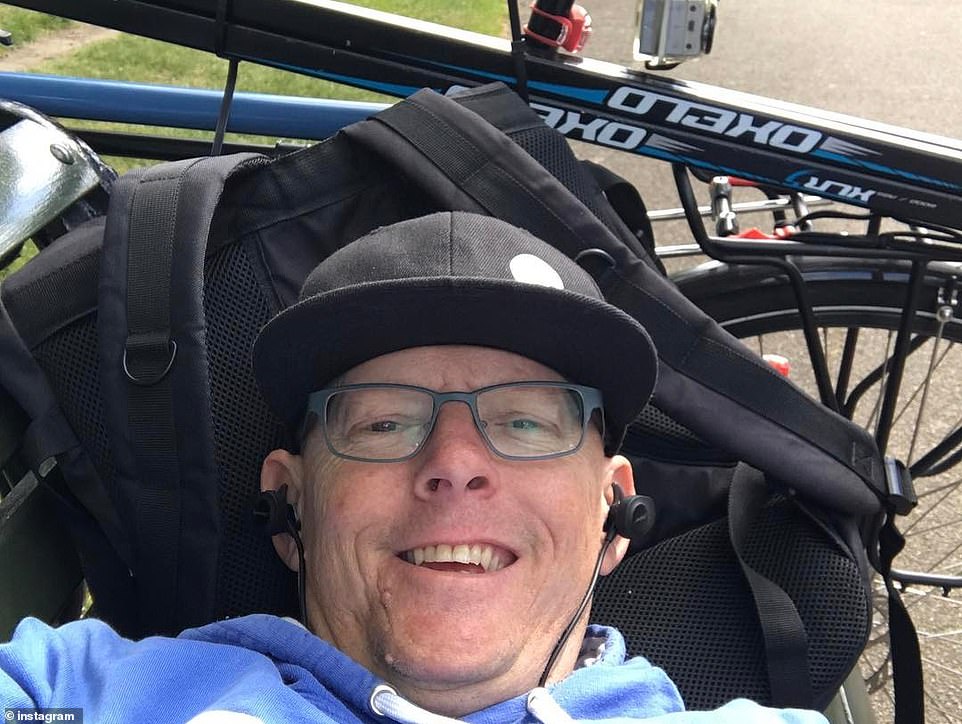 Since Mr Van Erp started using his ‘helmet-cam’ back in 2006, he has snared about 2,000 offenders — mostly people illegally using their mobiles

Back then, reporting an offence was a laborious process. ‘You’d have to burn a DVD and go to the police station to fill out a long form, so you only did it for the really serious ones,’ he says. ‘For a long time, it was purely to try to stop people from driving recklessly around me.’

That changed in 2018 with the emergence of online reporting. ‘It made things much easier — you just edit footage and upload it with a few more details,’ he says. ‘I got a few of those to court and I thought ‘wow I can really make a difference’. That’s when I started focusing on people more generally.’

In his court case against Paul Lyon-Maris, Mr Van Erp told the jury he accepted stepping out in front of vehicles is ‘risky’ but added: ‘I look at it in the same way as taking the keys off a drink driver – I want to stop the immediate harm.’

However, he was slated by defence lawyer Michael Epstein, who suggested video of the incident proved his real motive to achieve online ‘notoriety’.

‘I suggest that was a conscious move on your part to get on the bonnet of his vehicle,’ he said. ‘That was a pre-determined choreographed action to grab and hold onto that bonnet.’ 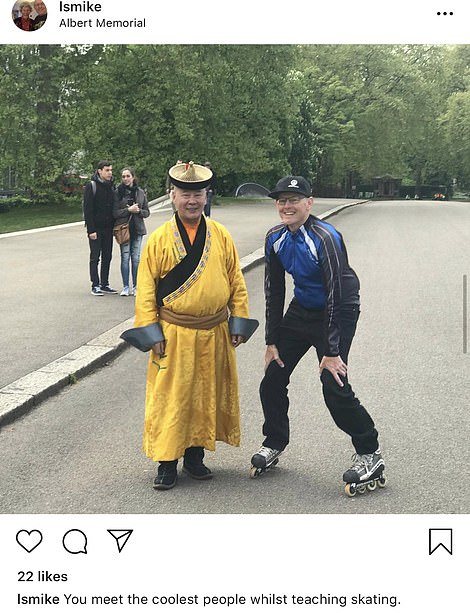 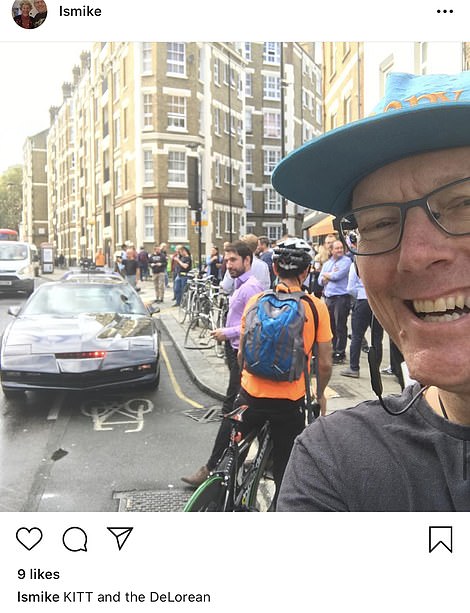 Mr Van Erp is a serial ‘camera cyclist’ who shopped 358 drivers last year and has even had death threats over his filming. Pictured are photos he has posted on Instagram

Mr Van Erp denied his actions were deliberate. ‘He specifically drove into me twice. Mr Lyon-Maris drove right up to me and hit me.

‘You are trying to suggest I am the antagonist here.’

‘I am,’ replied the defence lawyer.

Ultimately the jury would go on to find Mr Lyon-Maris not guilty of all charges – dealing a blow to Mr Van Erp’s war on motorists.

Whether it proves to be a fatal one remains to be seen.