The massive payouts come as TfL begs for another £900million from taxpayers.

It will heap more pressure on embattled London Mayor Sadiq Khan, who is also after a long-term capital funding deal to upgrade the Tube and bus network.

Both Khan and TfL have faced ferocious criticism after Tube workers went on strike four times in the last three months. 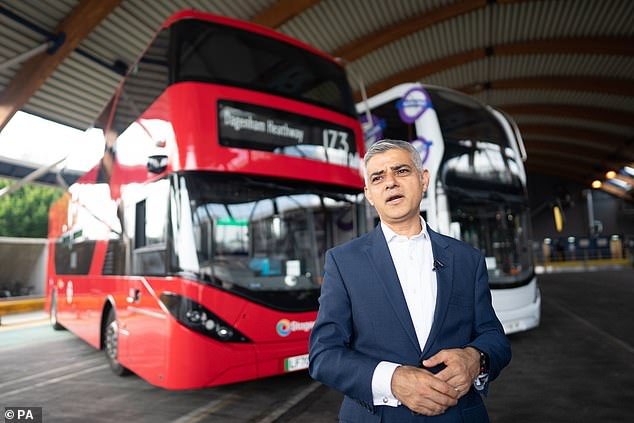 The mayor said last week that he was ‘not persuaded’ that TfL’s extortionate £401million final salary pension scheme needed to be curtailed.

But RMT members have voted to have another strike, with a date yet to be confirmed.

Now the London Evening Standard has revealed a total of 597 TfL and Crossrail staff earned six figures in 2021/22, compared with 455 last year.

The salaries, along with almost £1.6million of bonuses to 37 execs, were quietly approved on the day after the Platinum Jubilee – when London was hit by a 24-hour Tube strike called by the RMT.

The figures include a record-breaking £626,037 paid to Vernon Everitt, who left TfL in February. Susan Hall, leader of the Greater London Authority Conservatives, said the figures were ‘an insult to hard-working Londoners’.

She added: ‘We all want a long-term funding deal for TfL but the mayor doesn’t help London’s case by appearing so cavalier with their finances during times of such financial uncertainty.’

A Government source said: ‘These are unbelievable, tone-deaf sums of money, sneaked out only days after the mayor pleaded poverty and announced massive bus service cuts.’

A spokesman for Mr Khan said: ‘Since Sadiq took office in 2016 the number of people on a salary of more than £100,000 at TfL has dropped by nearly 20 per cent and the mayor has agreed with the TfL leadership that no new bonuses should be paid until TfL achieves financial sustainability by April 2023.’