Influencer tries to get wedding photos in exchange for ‘exposure’

A wedding photography company has publicly slammed a social media ‘influencer’ after she offered to pay them in ‘exposure’ to take pictures at her ceremony.

The ‘influencer’ bride’s publicist, named Melissa, emailed Betrothed & Co asking to commission a documentary-style video and around 1,000 pictures for the upcoming wedding.

But instead of inquiring about the price, Melissa stated that her boss would pay the company in ‘exposure’ – or shout outs on Facebook and Instagram.

She said her client has a combined following of 55,000 people on the platforms. 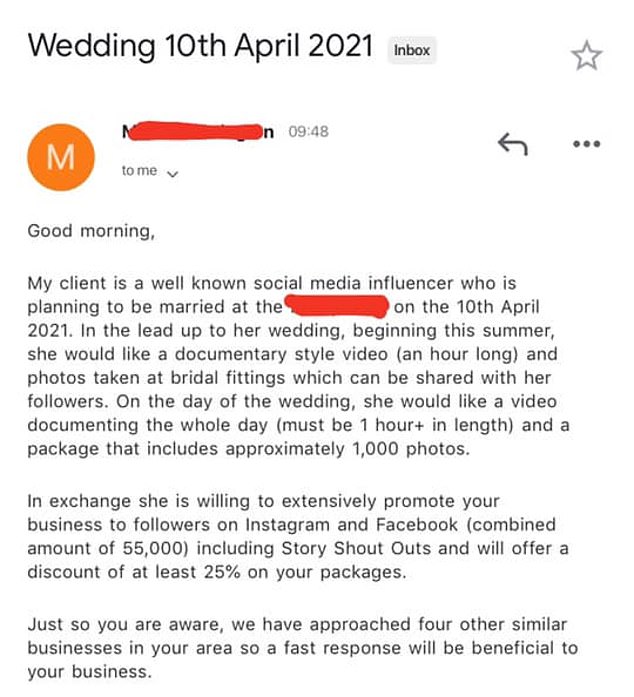 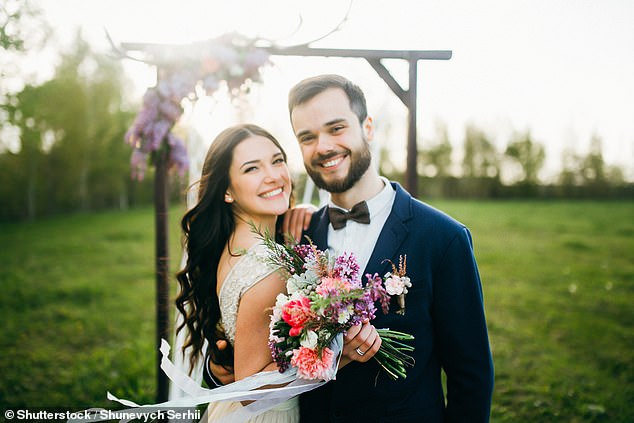 Melissa stated that her boss would pay a wedding photography company in ‘exposure’ – such as shout outs on Facebook and Instagram – for 1,000 images and a documentary-style video of her 2021 ceremony

‘In exchange she is willing to extensively promote your business to followers on Instagram and Facebook (combined amount of 55,000) including Story Shout Outs and will offer a discount of at least 25 per cent on your packages,’ Melissa wrote.

‘Just so you are aware, we have approached four other similar businesses in your area so a fast response will be beneficial to your business,’ she added.

The Hertfordshire-based company uploaded screenshots of the exchanges between Melissa and their photographers Frankie and Laura on Facebook.

First, the pair sarcastically asked whether Melissa had missed a ‘0’ off the her client’s number of social media followers. 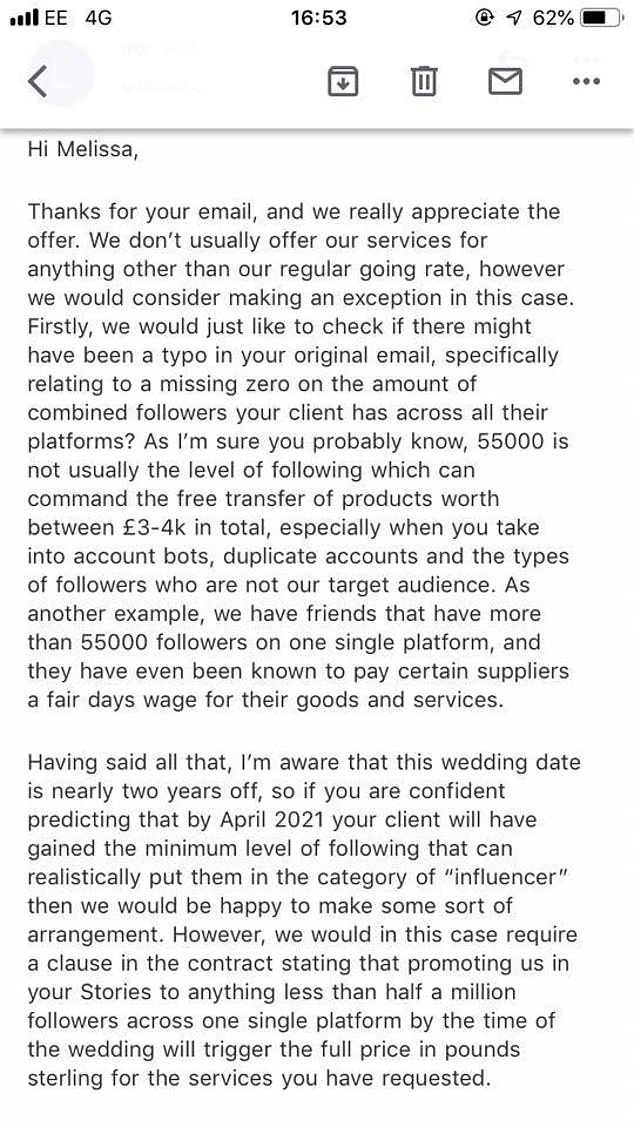 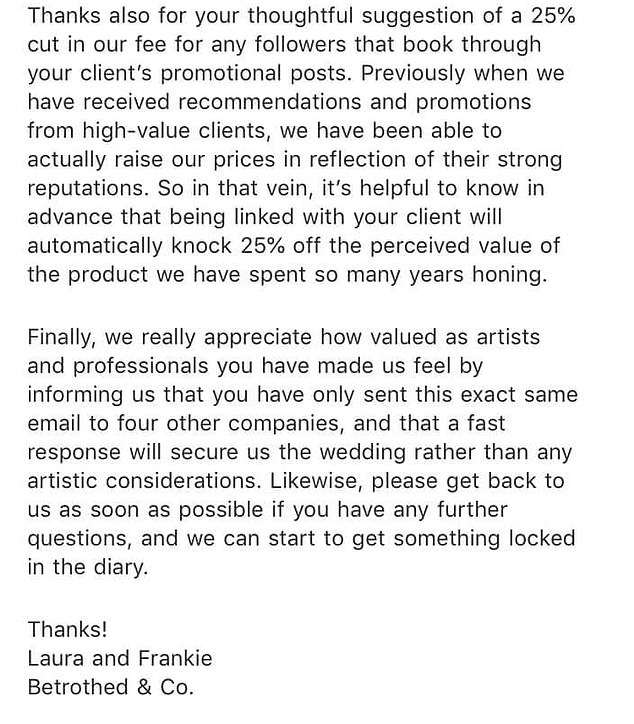 They wrote: ‘55,000 is not usually the level of following which can command the free transfer of products worth between £3-4K in total, especially when taking into account bots, duplicate accounts and the types of followers who are not our target audience.’

They went on: ‘Thanks also for your thoughtful suggestion of a 25 per cent cut in our fee for any followers that book through your client’s promotional posts.

‘Previously when we have received recommendations and promotions from high-value clients, we have been able to actually raise our prices in reflection of their strong reputations.

‘So in that vein, it’s helpful to know in advance that being linked with your client will automatically knock 25% off the perceived value of the product we spent years honing.’ 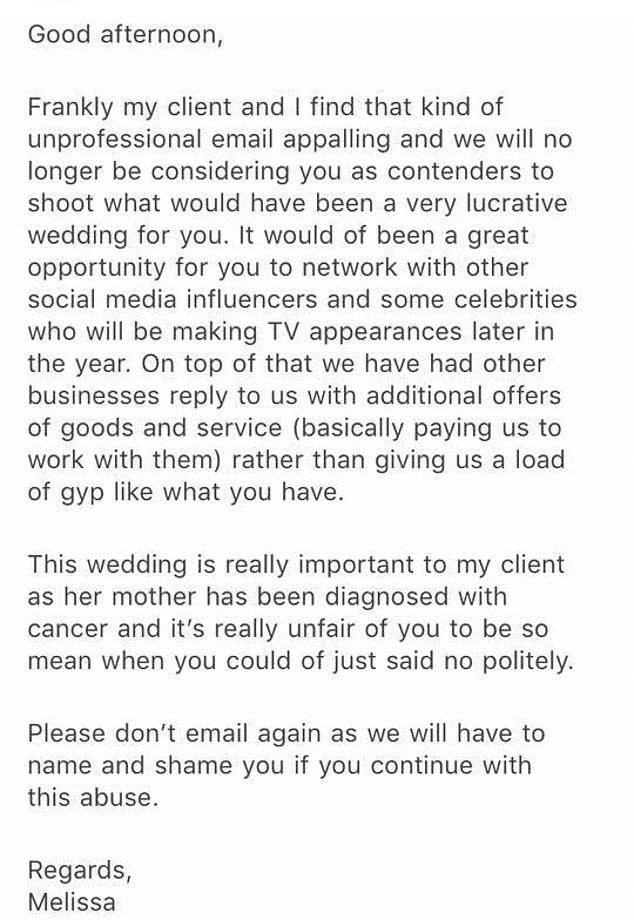 In her final email, Melissa called the photographers ‘unprofessional’ and ‘abusive’ and asked them not to contact her again

The pair did not stop there, saying that the fact Melissa had sent the email to four separate companies revealed just how little she valued them as professional artists.

‘We really appreciate how valued as artists and professionals you have made us feel by informing us that you have only sent this exact same email to four other companies,’ they wrote, ‘and that a fast response will secure us the wedding rather than any artistic considerations.’

But Melissa apparently did not see anything wrong with her original email and in her reply labelled Betrothed & Co ‘abusive’.

Her client, she said, found ‘that kind of unprofessional email appalling’ and will ‘no longer be considering you as contenders to shoot what would have been a very lucrative wedding for you.’

‘Other companies had replied with additional offers of goods and services, basically paying us to work with them,’ Melissa wrote, adding that the wedding was particularly important as her client’s mother has been diagnosed with cancer. 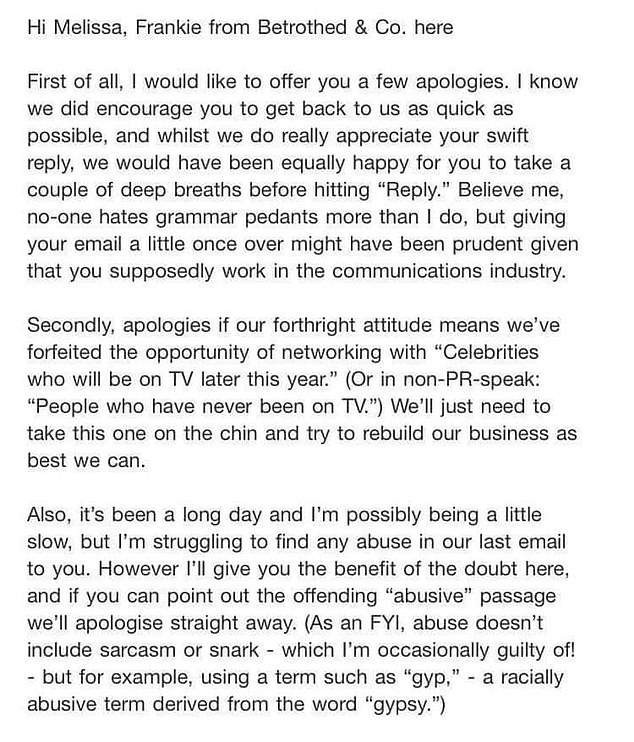 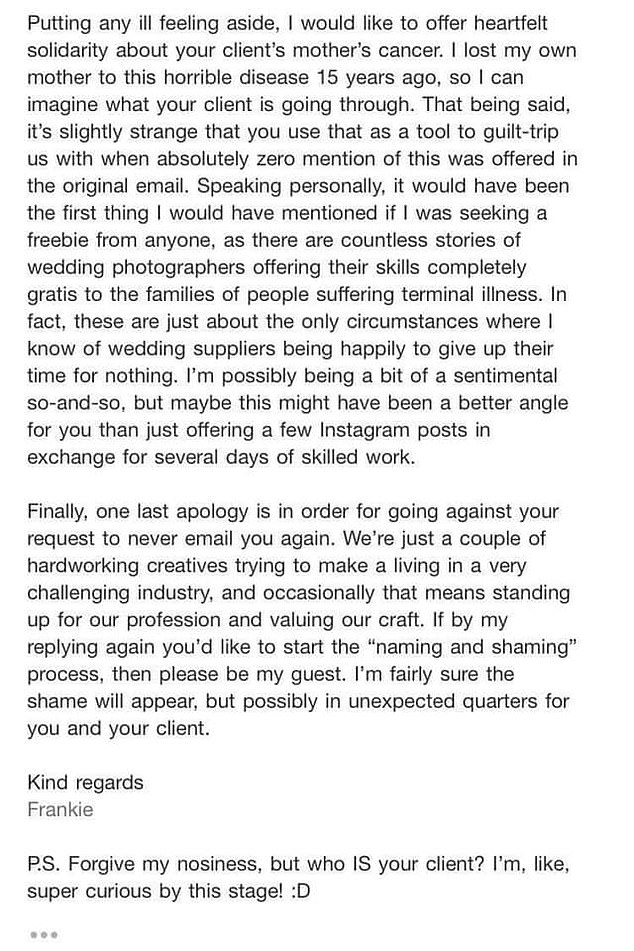 ‘We’re just a couple of hardworking creatives trying to make a living in a very challenging industry, and occasionally that means standing up for our profession and valuing our craft,’ the photographers said

Finally, she wrote: ‘Please don’t ever email again as we will have to name and shame you if you continue with this abuse.’

Frankie and Laura did email back however, telling Melissa: ‘We’re just a couple of hardworking creatives trying to make a living in a very challenging industry, and occasionally that means standing up for our profession and valuing our craft.’

‘We are a really tiny business in a really competitive industry and emails like this really disregard how hard we work,’ the photographers wrote.

They then broke down all the various services they would provide until the wedding, which was scheduled to take place in April 2021 – adding: ‘So if you’re an “influencer”, no, we probably can’t work for two years for you for free’.