SHE was dubbed Putin’s god-daughter after the Russian despot was spotted at her orthodox christening.

But now glamorous socialite Ksenia Sobchak had sensationally fled Moscow after police reportedly were hunting her down amid claims of extortion and tax fraud. 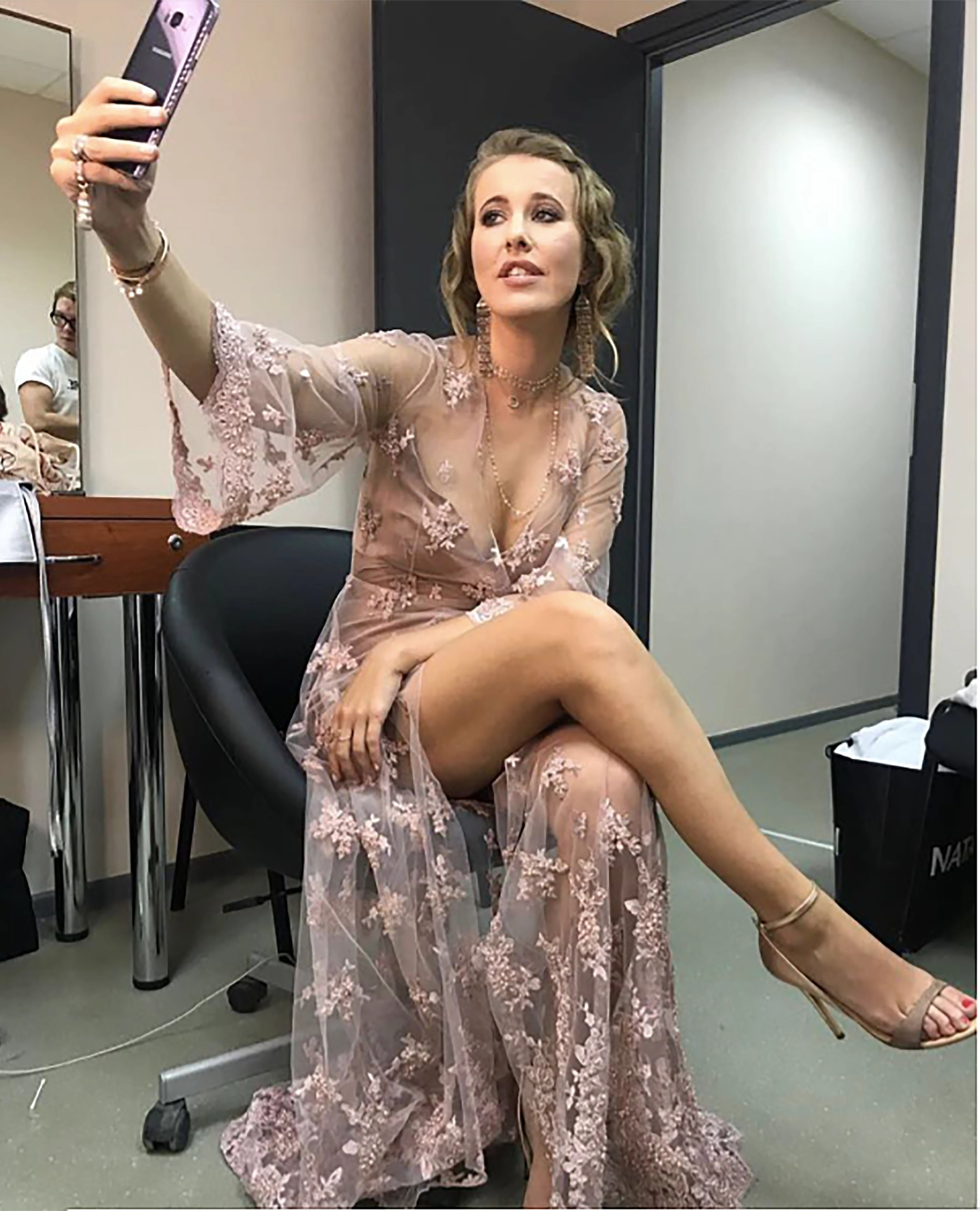 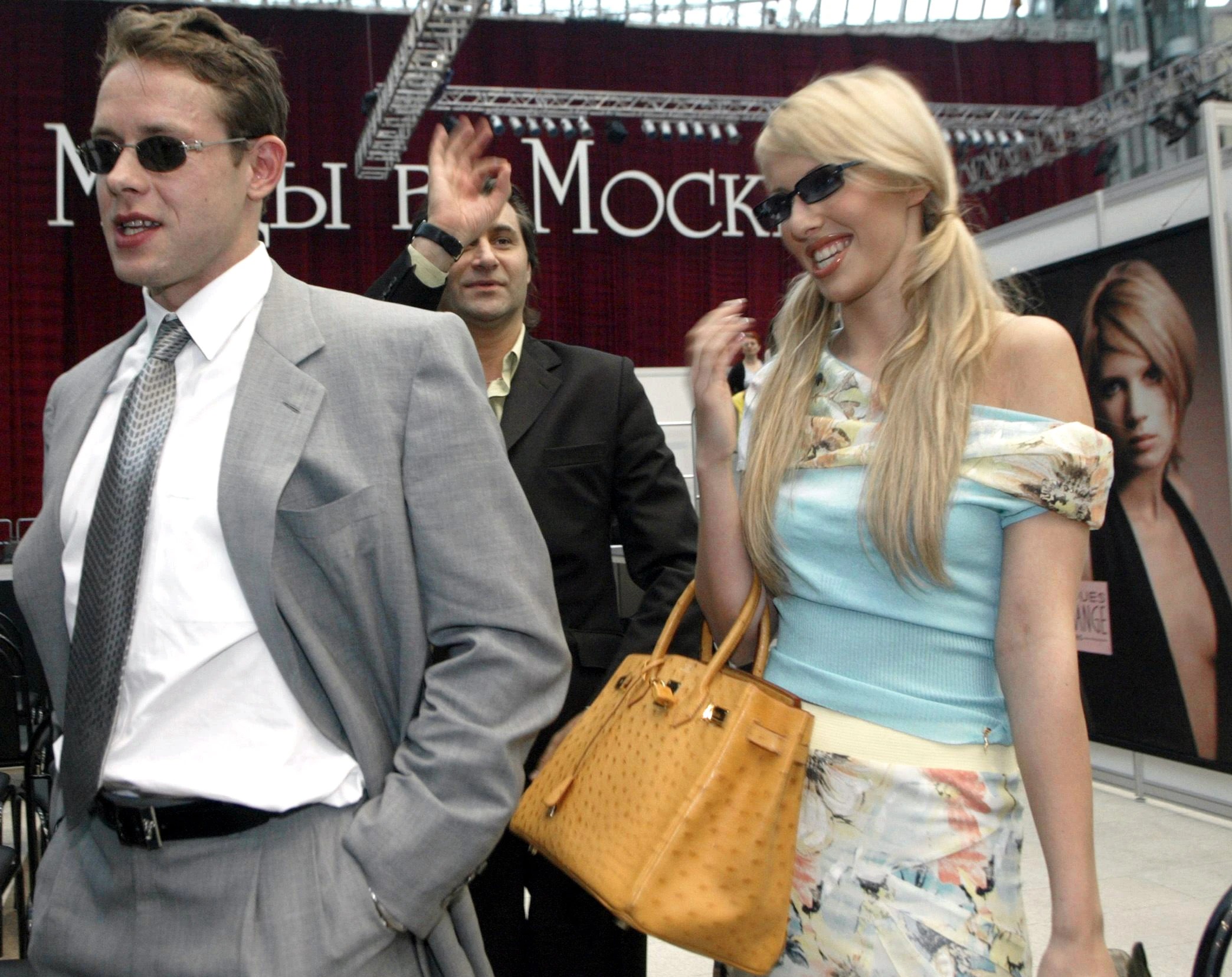 The 40-year-old former presenter escaped to Lithuania via Belarus after police arrested her business partner in what she claims is a politically motivated move.

Ksenia – who was once named the 22nd most influential woman in Russia – was the Russian equivalent of Paris Hilton in the Noughties.

But on Tuesday night she gave Putin's police the slip by booking flights to Turkey and Dubai as she fled Russia over land.

In CCTV footage she can be seen crossing the Belarusian border wearing a baseball cap with an unidentified man.

With a successful media career behind her, how did the glamourous one-time Putin ally turn into a 'most wanted' fugitive?

From her media scandals to her presidential campaign, we tell the intriguing story of Ksenia Sobchak.

In 2000, at the funeral of her father Anatoly, a tearful Putin – known as her “uncle Volodya” – stood shoulder to shoulder with grieving Ksenia and her politician mother Lyudmila.

Even before her birth, her father had become close to the Russian leader – a student in his law class. 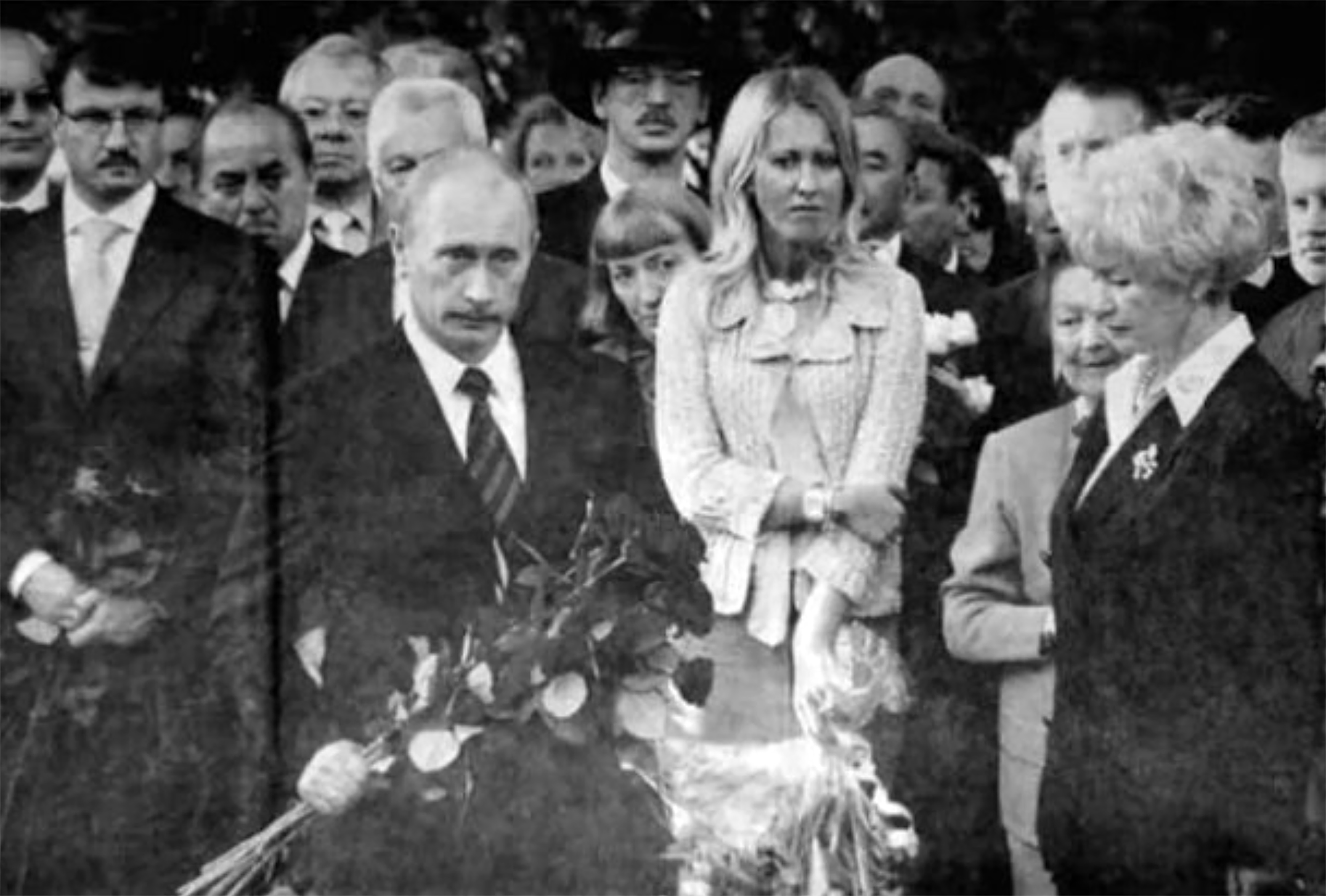 get them in there!

When her dad Anatoly became mayor of St Petersburg in the early Nineties, he is said to have given Putin a step into politics.

Putin – then a taxi driver – was appointed an advisor to Anatoly’s office in what was then known as Leningrad.

In 1997 Sobchak was accused of embezzlement and fled to Paris, only returning two years later when Putin was made Boris Yeltsin’s prime minister in Moscow.

In 2000, on a trip with Putin and two unnamed bodyguards, Anatoly suddenly died – seemingly of a heart attack.

The two bodyguards were treated for mild symptoms of poisoning after Sonchak’s death.

Putin – now president – told Russian TV he believed the death was down to stress, saying: "Sobchak's passing is not just a death but a violent death, the result of persecution."

A murder investigation turned up nothing and a private autopsy paid for by Lyudmila has never been made public.

Ksenia however has said Putin was a source of support as the family grieved.

In 2006 she said: "So many people used to bring me presents and shower me with false affection, and then one day there was absolute silence.

“The phone did not ring and nobody came anymore. I hope I never experience that again. [Putin] did a lot for my family then and I am proud he was a friend of my father". 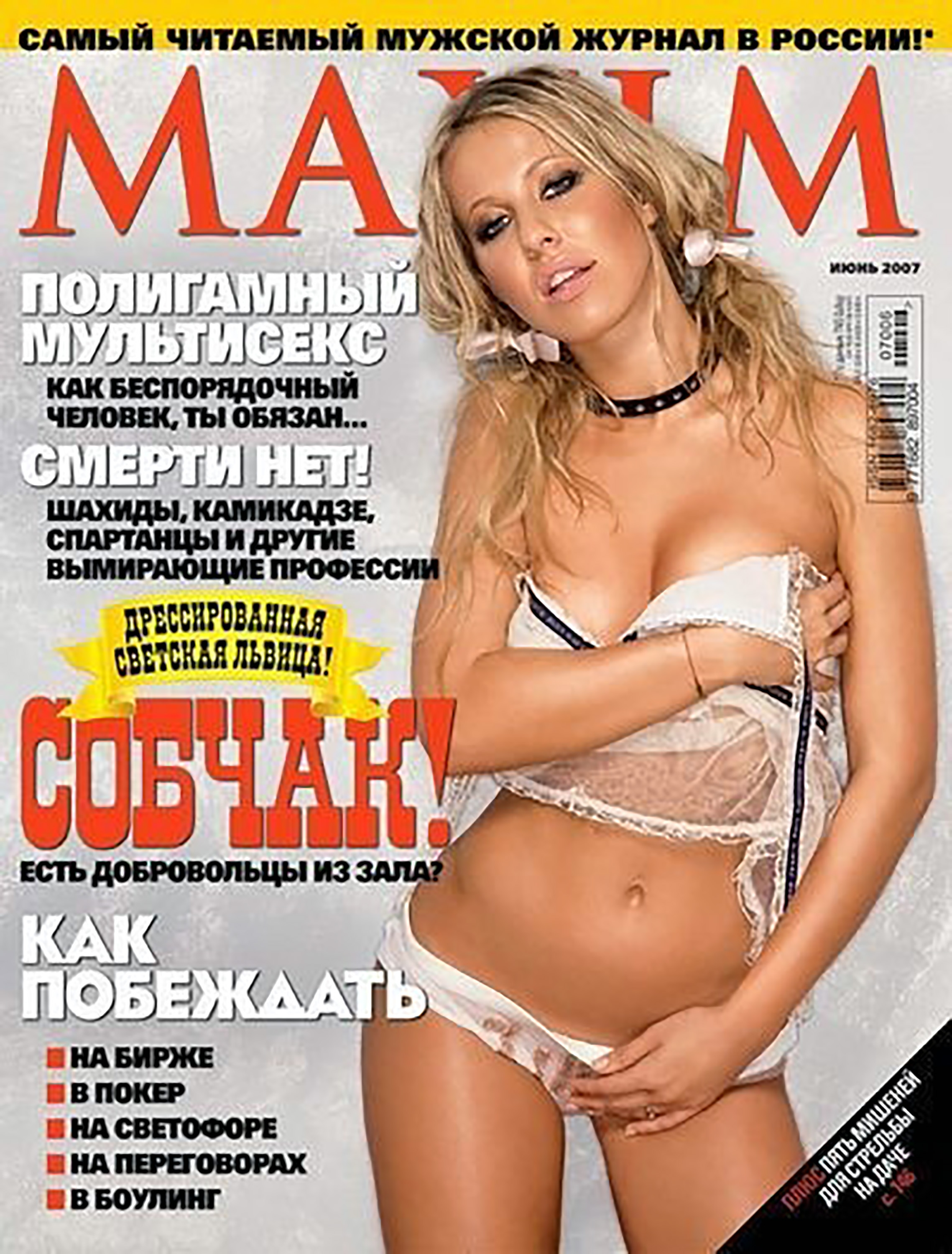 In the wake of her father’s death, Ksenia mentioned she’d like to enter politics but after graduating in 2004, she ended up presenting the Russian equivalent of Love Island, Dom-2.

The show was once described as “the worst thing to hit Russian culture since the Mongols”.

Soon the show caused controversy for its racy scenes – and Ksenia was accused of running a brothel.

Saucy Sobchak posed for Playboy in 2006, as well as Maxim and Russia’s edition of Glamour – and was never a stranger to fashion shows and lavish parties.

That same year she competed in Russia’s version of Strictly Come Dancing – helping her earn an estimated $2million (£1.7million) a year.

She raised her profile further with a string of movies – even starring in a film called Thieves and Prostitutes.

She soon caused a scandal on an international scale when she was said to have caused the breakdown of former Chelsea owner Roman Abramovich’s marriage.

The party girl introduced the oligarch to her friend – a 24-year-old model Dasha Zhukova who would become the third Mrs Abramovich.

His second wife Irina, whom he divorced in 2007, was reportedly furious at Ksenia for making the introduction at a Moscow event.

A close source told the Daily Mail: "Irina loathes Ksenia. She will never forgive her for what she has done.”

Meanwhile, Putin was said to be frustrated by his link to the split.

A source said: “Putin could have looked the other way if Roman had carried on the relationship in secret. But he flaunted it. He took her everywhere with him and was careless enough to get photographed with her.

“And this was a woman Putin's own goddaughter had introduced to him. It was very embarrassing for the president.”

However, around this time Ksenia set about carving a new serious persona – by ditching her party-girl ways for politics.

In 2006, she set up a youth movement and later she began to date Putin critic Ilya Yashin.

She said at the time: "Maybe I was a naughty girl but I am not one now."

She added: "Thanks to 'Dom-2' I had the chance to meet different young people and to know their problems.

"I understand what these people need and what to give them."

Yet she still defended her father’s friend, telling the New Times: "I'm against this system. I'm against bureaucratization, corruption, seeing the same people in power.

"But I'm not personally against Putin."

But from 2011 she began attending anti-Kremlin rallies and even made a parody video sending up Putin’s supporters.

She was arrested during Putin’s 2012 inauguration for holding a protest.

She began to host political show Dozhd TV where she rattled bigwig Russian politicians with her direct interview style.

In 2012, she told Russian Pioneer magazine of a bizarre dream she had of Putin.

Some Russians believed it was a coded description of a real encounter with the leader.

She claimed the apparition of the Russian president berated her for opposing his government.

In the dream, Putin told her: "Do you understand what sort of country we are living in?

"You think there would be elections? Freedom and equality? There will be chaos and blood. An army junta would be the best option.”

He added: “I put this country back together piece to piece. I lived in my offices and on work trips. You think I am scared to lose my position?

"I would go on pension quietly, but there won't be quiet pension – it will be war and riots.

"You think I deliberately surrounded myself with thieves and cheats? All of them are cheats – it is written in their genes. Do you think someone other than me is caring about our country?"

In 2014, she spoke of how her peers were fleeing the Russian capital over western sanctions.

She told radio station Echo Moscow: "This is the main society talk in good restaurants in Moscow. It is either getting citizenship, or residence permits, or the like.

"My friends, all they are talking about is visas.”

She added she feared jail for joining protests over the annexation of Crimea, and Russia’s attempted invasion of Ukraine.

She told the radio station: “In every normal Western country, any person who is not prepared to go to jail can be politically active and even think about a political career.

"In our country, everything is too tough. In other words, if you are ready to be jailed, to be like Mandela, then you can claim a right to become the next president.

"And if you are not ready, then don't even try.

"This is why I am not doing it, and I honestly say I am not ready to experience a Russian jail even for my beliefs that are important for me. I am scared." 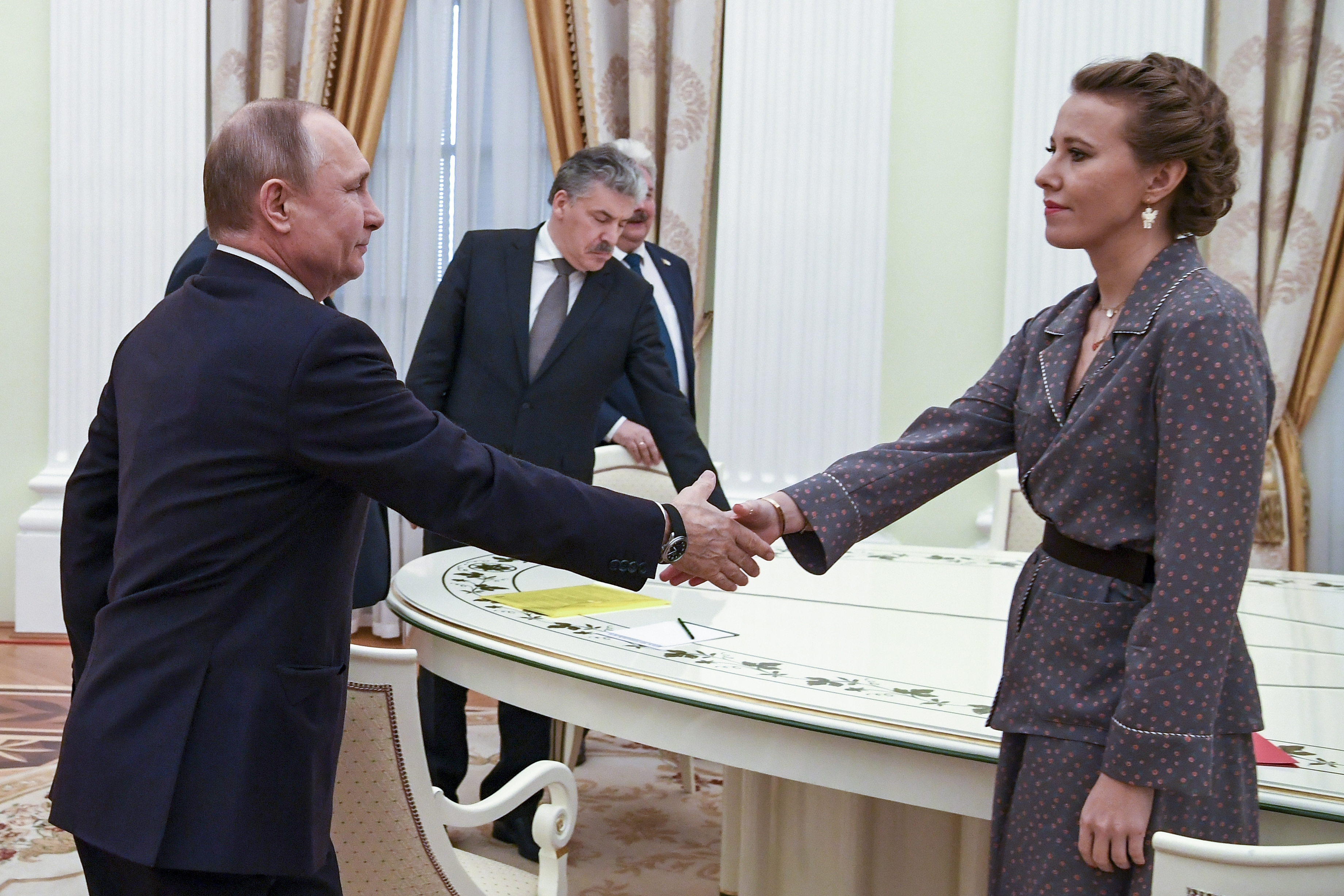 Then in 2018, Ksenia ran unsuccessfully in opposition to Putin in the 2018 election – in place of banned candidate Alexei Navalny.

Putin addressed her desire to become a politician, paying tribute to her father: "I treated and keep treating her father with respect, I think that he was an outstanding personality in the modern Russian history.

"I am saying this without a single hint of irony. He was a very honest man and he played a huge role in my life.

"But when we are talking about the idea of running for presidency, such personal matters cannot play any significant role.

"It depends on what kind of programme she can offer, if she decides to take part, and how she builds up her presidential campaign.

"This is what her success or failure will depend on."

But jailed Navalny accused Sobchak of being a puppet opposition candidate to Putin – to give the illusion of democracy.

He said: “The Kremlin's plan is very simple here: with the help of money, or maybe access to television, they want to bribe her."

Since then, Ksenia has criticised Russia’s gay propaganda law and the invasion of Ukraine. She told The Moscow Times: "We the Russians will be dealing with the consequences of today for many more years".