Washington: Democratic nominee Joe Biden has injected a dose of populism into his presidential campaign, painting President Donald Trump as a friend of America's corporate elite rather than a champion of working class voters.

Biden has notably shifted his rhetoric in recent days by adding a focus on economic inequality to his existing criticisms of Trump for dividing the US and mishandling the coronavirus pandemic, which has killed 200,000 Americans. 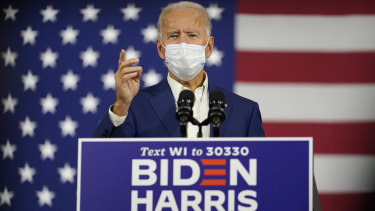 In a speech at an aluminium plant in Wisconsin on Tuesday (AEST) Biden directly addressed the voters who supported Barack Obama before switching to Trump in 2016.

"I know many of you were frustrated. Angry. You believed you weren't being seen or respected or heard. I get it," Biden said. "It has to change. And I promise you this: It will change with me. You will be seen and heard and respected by me."

Biden struck a noticeably more empathetic tone than the 2016 Democratic nominee Hillary Clinton, who said around half of Trump's supporters could be put in a "basket of deplorables" and described them as "racist, sexist, homophobic, xenophobic, Islamophobic".

"Guys who look down on you because they've got a lot of money. Guys who think they're better than you. Guys who inherited everything they ever got in life and then squandered it.

"Guys who do everything they can to avoid paying what they owe in taxes, because they figure the rest of us – the 'little people' – we can pick up the tab for the country."

Trump's appeal to the white working class – especially men – in former manufacturing centres was crucial to his shock victory in 2016.

Democrats received some criticism for focussing too much on themes such as gender and racial diversity at their convention last month rather than economic issues. 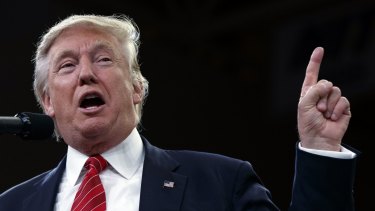 Donald Trump is no friend of the working class, Biden says.Credit:AP

"It’s not only that he forgot them, though. The truth is he never respected them."

Biden referred to recent claims by Olivia Troye, an ex-Trump administration official, that Trump had said one upside of the pandemic was that he didn't have to shake hands with the "disgusting people" that supported him.

"For Trump, these rallies are about entertainment and adoration – not respect," Biden said.

Biden said he would be proud to be the first president in many years not to have attended a prestigious Ivy League university.

"I say it’s about time a state school president sat in the Oval Office," Biden said. "Because you know what? If I’m sitting there, you will be too."